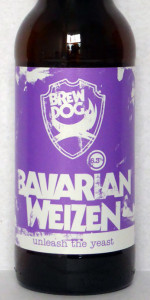 A 330ml bottle with a BB of Oct 2014, so it's a bit out of date. Purchased a while back from the Brewdog webshop. The last of this series for me; lets see how it compares.

A: Poured into a cervoise. Bottle conditioned. A rich, hazy orange-amber hue with tons of floating sediment and light carbonation. Looks like coagulated proteins. Yields a large head of creamy white foam that lasts for a few minutes before subsiding to a patchy surface layer. Slight lacing.

M: Mouthfeel is smooth, tingly and dry, with light carbonation and decent body. Could definitely be livelier (certainly for the style). Pretty astringent, accompanied by an aftertaste of harsh stewed leaves/cardboard, earthy yeast and faint grain.

O: Blech - not particularly good. Mind you, I admit that it could just be too old. Certainly the least enjoyable of the four, but arguably also the one where the yeast strain and beer recipe are most divergent (from typical usage). Lacklustre looks, while the aroma and flavour aren't great; harsh stewed leaves/cardboard and dry yeastiness. Little malt character to round the beer out. Subpar body. Not a brilliant tipple - gives weizen yeast a bad name. The black sheep of the set.

330ml Bottle as part of the Unleash The Yeast 4-pack:
Clear, orange looking amber colour with a thin, half-centimetre tall, bubbly, white head that quickly fades to a patchy lacing that covers most but not all of the surface.

Lively with some citrus followed hints of banana and a slightly stronger smell of bubblegum on top of that. There is a fruity backbone to the aroma and it is definitely reminiscent of other hefeweizens.

Bubblegum with banana following closely behind are what start this beer off, there is also some light citrus and some citrus and fresh grass in there as well with some bitterness rounding things off.

Medium carbonation on top of a medium body and a slight tang to the beer. The beer was a little bland and almost watery on the palate in places and the balance was all over the place.

A definite step backwards from the first in the Unleash The Yeast series that I tried with the Pilsen Lager offering tasting a lot better than this one, although neither of them were particularly good beers to be honest.

Nice aroma of banana, cloves and bubblegum, I could swear there is some wheat; I guess I am wrong, the tiny guys are the culprit again.
Predominant flavor of bubblegum, bananas and cloves with herbal notes.
Dry and bitter aftertaste, especially for a Weizen.
Medium body with low carbonation for the style.
Amazing that the yeast is the real pilot on a Weizen, the wheat is not even close.

Unleash The Yeast: Bavarian Weizen from BrewDog
Beer rating: 78 out of 100 with 14 ratings