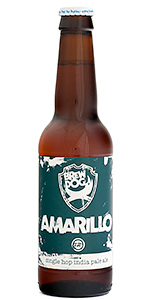 In a packet of comet, exp366, kohatu; body very soft orange with nice co2 foam, scent of grapefruit and in the distance pine and hay behind it sweet malt earthy yeast and an average finish

A 330ml bottle with a BB of March 2015. ABV is stated as 7.2%. Purchased a while back from the Brewdog webshop (as a 4-pack). A single-hop IPA using Amarillo; I'm going to try the set in succession.

A: Poured into a Duvel tulip. A deep, hazy marmalade hue with fine sediment and medium carbonation. Yields a decent head of creamy white foam that lasts for a few minutes before settling as a patchy surface layer. Slight lacing.

O: A solid American IPA with a vigorous hop character. Looks alright, while the aroma and flavour are stuffed with citrus and mild pine - underpinned by caramel malt. Good body. The hop flavour is leafy as well as fruity, but none the worse for it. A nice showcase for Amarillo; worth sampling if you have the chance.

Pours amber with a large, lasting head.
Nose shows orange peel, floral hops, orange marmalade, spicy notes and a fair whack of sweet clean malt.
Lots more orange marmalade as a flavour along with some pine and resinous hops. Lots of malt sweetness too followed by an assertive bitterness to round things out.
Nice moderately high carbonation works well.

The colour is gold, the liquid is clear. The two finger head is off-white and compact. Some lacing occurs.

The smell is loaded with citric fruits, peels and lemon sweets. Hints of gravy and oil paint.

The taste is grand and elegant. Passing notes of lemon sweets and a smooth fruity flavour. Lemon cheesecake in the finish.

The carbonation is medium strong, the long-lived bubbles mid-sized. The liquid is somewhat smooth.

A pleasant and rounded IPA.