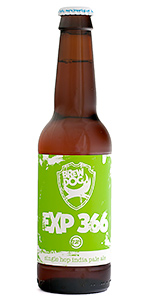 In a pack of amarillo, comet, kohatu; body very soft orange with nice co2 foam, scent of hard pine and hay behind it pepper lychees, caramel and an average finish

Amber color with a thick head with good retention and leaving a thin plate.
Initial relatively malty aroma compared to the other single hops from the series, with notes of coconut, lychees, melon and caramel malt.
Bitter flavor with notes of lychees, caramel malt, earthy and resiny hops, wood, mango, coconut and pears. Dry and bitter aftertaste, but sure it does not feel as 75 IBUs. Even less than the others.
Medium body with good carbonation. Alcohol of 7.2% abv is well disguised.
Nice, but this hop variety seems to goes better blended with other varieties. Also, it did not resist time as the other single hops.

A 330ml bottle with a BB of March 2015. Purchased a while back from the Brewdog webshop. A single-hop IPA using EXP 366 - a new hop that doesn't have a proper name yet.

A: Poured into a Duvel tulip. A rich golden-amber hue with faint haze and light carbonation. Yields a large head of creamy white foam that lasts for a minute or two before reducing to a patchy surface layer. Some lacing.

S: Aroma of grassy, fruity hops with hints of lemon, citrus, grass/hay, mild white grape, a touch of melon, caramel malt and earthy yeast. A whiff of booze in the background. Understated but pretty good.

O: A decent American IPA, though this hop variety is not as intriguing as I'd anticipated. Looks OK, while the aroma and flavour possess a grassy, lightly fruity character backed up by caramel malt. Decent body. Somewhat drier than the other brews in this series, but I suppose batch variation is inevitable. Certainly drinkable, and worth sampling if you chance across it.

The colour is gold, the liquid is clear. The two finger head is off-white and compact. Some lacing occurs.

The smell is relatively dry. Citric candy, detergents and violet candy. It is a bit uninteresting and frowsy.

The taste is rather bitter. Woody sharp notes. The bitterness fades quickly. No citric notes or resin. Some fruits in the aftertaste.

The carbonation is medium strong, the long-lived bubbles mid-sized. The liquid is somewhat smooth.

Although it is very bitter in the start, it fades very quickly.