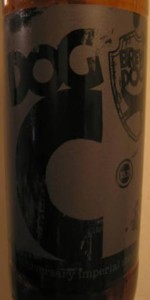 Notes: Dog C is an extra special brew, marking 7 years of BrewDog. Like Dog A & B before it, Dog C is an imperial stout, brewed with a potent mix of speciality ingredients.

Dog C pours like dark matter into your glass, with a deep tan head. On the nose there’s a subtle but powerful blend of dark chocolate, espresso, chilli spice and molasses, boosted with hints of molasses, cocoa powder and brandy.

On the palate, there’s a chewy treacle toffee backbone, supporting the spicy hop flavour and naga chilli heat. The malt bill adds further spice from the rye, and a smooth refined mouthfeel from the wheat and oats.

Dog C is like eating chocolate ice cream and drinking cognac in a leather armchair. It’s like Darth Vader - powerful yet restrained. It’s also perfect for cellaring, or for a vertical tasting with Dog A & B.

This one pours a very dark black, inky and foreboding, with a very small head no lacing.

This smells like intense dark chocolate, with a a very small level of pepper heat, and some coffee and bitter charred malt.

I'm not sure how old this bottle is, but the pepper is very subtle. There's a lot of heavy duty roasted malt though, with a good amount of dark chocolate and creamy coffee flavor.

This is pretty thick bodied, with a good level of carbonation for the style.

This just about knocked me out for the night- it's intense and boozy, but highly enjoyable.

Tons of molasses on the nose, blended with espresso, chocolate, and roasted barley. Rich and smooth.

Flavor follows: it's a deep, dark beer experience, full of flowing chocolate and molasses. A touch of licorice here and there, and a humble amount of char. The naga chili is all but gone now with two years of age; there's a touch of both the flavor and heat, but only just.

15.1% ABV. Reviewed live as an imperial stout per the label. Expectations are well above average given the brewery and style; this is a style they usually pull off. Purchased at Stockmann in Tallinn, Estonia.

HEAD: Half an inch wide. Khaki-tan colour. Has an even consistency. Soft-looking. Good complexion. Leaves no lacing as it recedes. Retention is below average - ~1.5 minutes - which is forgivable at 15.1% ABV.

BODY: Predictably, it's an opaque black. No yeast is visible. Sleek.

A nice albeit conventional imperial stout appearance. Not unique or special, but it has me looking forward to trying it. I notice no egregious flaws.

AROMA: Scintillating notes of chocolate - real chocolate, not merely chocolate malt (though that appears also). Cream. Cacao. A faint hint of coffee - though the coffee is pretty one-dimensional and simple, lacking any rich espresso notes, roastiness, etc. Sweet dark and schwarz malts. A hint of sticky molasses. Treacle.Fudge. Leather. A kiss of vanilla.

Aromatic intensity is average. Suggests a pleasing but not cloying imperial stout with plenty to offer the discerning drinker. But I find none of the naga chilli promised on the label.

TASTE: A balanced albeit shallow flavour profile whose highlight is indeed the subtle chilli pepper heat. It's never hot, burning, or spicy, but the chilli does integrate seemlessly into the dark & schwarz malt backbone without veering the beer into Mexican chocolate territory. Notes of chocolate and chocolate malts contribute to the sweetness, but the beer is never cloying or saccharine. Cream makes an appearance, as does a hint of vanilla. I find no overt coffee or roasted barley (to my chagrin, and the beer's detriment).

Well put together, with plenty of cohesion. But it never feels like it exceeds the sum of its parts, and it could definitely be improved via more notes (coffee, roast, hazelnut, peat, barrel aging notes, et al.) and more depth of flavour. I like it, but at this price point I'd hope for more - especially in an anniversary beer.

It goes beyond shallow, venturing into muted and reticent.

TEXTURE: Full-bodied, creamy, soft, smooth, and wet. Borders on silky - a magnificent attribute given the dessert beer vibe. Unrefreshing, though not harsh, boozy, or astringent. In fact, that it hides its 15.1% ABV as well as it does is shocking. Very well executed in terms of its mouthfeel, though it's not as delicate or fragile in its feel as the best beers in the style. Complements the taste nicely, and helps elevate the beer.

OVERALL: Shockingly drinkable for its high ABV, and not at all the armchair sipper you might expect it to be. The softness of the mouthfeel coupled with the simple but effective chocolate notes is reason enough to pick this one up, though discerning drinkers will find it nevertheless disappointing given that it's an anniversary imperial stout coming from Brewdog. As much as I like it, its shallowness really holds it back, and the cynic in me can't help but look at the price point and figure this is more about marketing than it is about quality (in classic Brewdog fashion). I'm glad I tried it, and it does open up a bit as it warms. The mouthfeel alone is an experience, but it can't hold a candle to the paragons of the style.