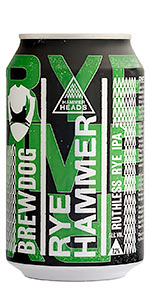 Notes: Jack Hammer has been single handedly ripping it up for quite some time. Now this IPA, has spawned four hammer head off-springs. Rye Hammer is the fourth of our super-charged hyped up hybrids.

A grapefruit harvest of citrus melts away to sticky roasted caramel and rye warmth, all resting on a malted biscuit backbone. Then ‘The Hammerhead’s trademark bitter finish reasserts its authority.

Appearance: A golden orange colour that is lightly hazy with lots of extremely fine floating sediment, a two finger white head that dissipates fairly quickly, but left some nice lacing.

Taste: Very bitter grapefruit, citrus rind and citrus peel followed by mild pineapple, peach and apricot. There was hints of caramel and the alcohol does come through at times. Finish was bittersweet, although definitely more bitter than sweet.

Overall: This was ok, but a bit harsh through its bitterness and the alcohol that comes through.

A 330ml can with a BB of Dec 2017. Purchased recently from the Brewdog webshop. A variant of their Jackhammer IPA brewed with rye malt.

A: Poured into an IPA glass. Can-conditioned. A deep golden-amber colour with fine floating sediment and good carbonation. Produces a large head of creamy white foam that lasts for a few minutes before reducing to a patchy surface layer. Some lacing.

T: Tastes of intensely bitter aromatic hops with notes of grapefruit, peel, citrus, vague tropical fruit, mild pine, earthy yeast, a twinge of rye and faint caramel malt. More than a hint of alcohol in the background. A brutal, hop-driven bitterness upon swallowing. The rye character is not as forthright as I expected it to be.

M: Mouthfeel is smooth, tingly and dry, with spritzy carbonation. Hop oils massacre the palate. Body is OK but a tad thin for the style. Aftertaste of bitter grapefruit-laden hops and subtle earthiness.

O: Super-intense hoppiness. Looks great, while the aroma and flavour are replete with bitter aroma hops and subtle yeast. Body is alright but slightly insubstantial. The main flaw is that the rye doesn't seem to be very robust, verging on indistinct. In fact, the overall malt presence seems reduced compared with regular Jackhammer and the hops almost too bitter as a result. Still a good brew but rated down a little as a result. That said, if you love hops you won't want to miss trying it.

The colour is pale gold, the liquid is clear. The two finger head is airy, it sinks quickly down to a thick lid leaving no lacing.

The smell is rustic and bitter with ripe grapefruit, metal, rye bread and fruit candy. It is a bit unclean.

The taste is thick and bitter. It is quite malty, too with bread-like sweetness, grapefruit hops, nutmeg, ripe plums and bitter herbs. Full body. The aftertaste got growing (hot) alcohol and bitterness, sweet citric fruits, green pepper, ginger and sour lemon candy. The finish is semisweet with bitter grapefruit, some porridge and farmhouse bread.

The carbonation is medium strong, the many small bubbles are long-lived. The liquid is semi-thick.

An old-fashioned DIPA with a pleasant addition of rye spiciness.

330ml Can from BottleDog, Glasgow:
Very bitter with a lot of pine & floral hops alongside some grapefruit that started well with the nose but turned overpowering but not quite sickening come the taste; it was still enough to put you off though. It proved to be quite a one-dimensional beer after the nose with very little showing beyond some pine hops & the odd background fruits, at least the tropical fruits were a little more pronounced with the nose but I definitely expected more from them & the sweeter malts come the taste. After quite a good start, I quickly turned on this beer & it wasn't one that I enjoyed much so I'm thankful it's another one-off from the brewery as I couldn't see me having it again.