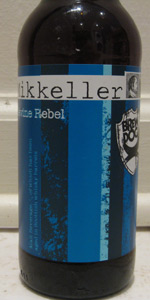 A: Pours yellow from the bottle, but forms a deep hazy brown in the glass. A relatively big bubbly off white head forms and disappears quickly/ leaving a ring around the glass and lacing nicely.

S: Honestly the smell scares me. This smells like a boozy mess with some caramel and molasses mixed in. Seems to have some brett in it, sour notes arise as well.

T: Yep this is pretty much what I expected from the taste. Wow is the flavor big on this one. Molasses, caramel, Scotch, malts, a ton of booze all coming to light. The taste really just punches you in the mouth...and not in a good way.

MF: Medium body with a nice twinge of carbonation.

O: Disappointed. The flavor is awful.

A: Pours a hazy amber with a creamy beige head.

S: Aromas of caramel, toffee, honey, and roasted nuts are present on the nose.

O: This is a very good barleywine, and I think the blend of aged ales that went into making this beer was particularly effective. This may not be the most traditional English barleywine in the world (as a matter of fact, it is far from it), but it is a very good take on the style nonetheless.

Sm: Cream, caramel, light nuts, and light vanilla/lactic notes - though they're indistinct. A mild strength aroma. No alcohol comes through, which is remarkable.

T: Strange dark fruit esters, light caramel, decent cream, and pleasant indeterminate hops. Not at all simple, but far from complex (if that makes sense). No alcohol comes through. It's nicely balanced, which is hard to do at this strength.

Mf: Smooth, wet, and a touch thick, but not overly so. It suits the flavour, but is far from tailored to it.

Dr: High ABV, good quality, and easy drinkability. I'd recommend it to fans of the style, but the price point may act as a deterrent to common consumers.

The Scottish Brewery BrewDog has been making a name for themselves as brewers of both unique and extreme craft beers. These guys are constantly challenging the status quo to develop new and exciting beers. Mikkeller on the other hand is a Danish Brewery that has taken a much quieter approach to promoting their beers (practically no promotion at all) and their beers are among the most widely sought after in the world. So what do you get when you combine these two powerhouses?.. The Devine Rebel.

The Devine Rebel is a collaboration project brewed at BrewDog as a Barleywine. 1/4 of it is aged in oak Speyside whisky barrels then conditioned in a steel tank. It has been fermented with both an ale yeast and a champagne yeast. Only one hop variety has been used. It is 12.1 %abv. What we have here is a heavyweight. It comes in a rather unassuming 355ml bottle - but shows its true colors the second you unleash this beast into a glass. This bottle was batch #243, and was capped on July the 5th, 2009 - it was tasted on August the 13th, 2010.

What's a 1 year old barleywine from the likes of the most ridiculous and most artistic brewers on the other side of the Atlantic going to be like? I love the fact that there is only one hop variety here because a lot of the barleywines that I have had recently have been American Barleywines, which are massively hopped. I was also quite happy that this beer was partially aged in Speyside whisky barrels - I love Speyside whisky, and moreover also love oak aged beer!

I opened the Devine Rebel warm around 14C (57F), which is much warmer than you would typically enjoy a beer, but is also still much cooler than room temperature around 21C. These large barleywines deserve the warmth to let all of their flavors and aromas escape into your senses. The pour was exceptionally oil-like in consistency and fell heavily into the bottom of my tulip glass. It showed near zero carbonation - only the slightest film of misty head formed, but faded before I could even get a picture of it. What you are left with is a translucent amber brown beer with dark mahogany, gold, and copper streaking though it and a murky overall character.

This beer looked pretty menacing, as if its time in the whisky casks had jaded its outlook on life. It is over 12% abv, and was conditioned for many months, so carbon dioxide would have a hard time living in a beer of this structure. It is also very typical of a big barleywine.

The nose is deeply malty with layers of booze, mashed fruit, burnt brown sugar, candy and molasses. Give the beer some time and you can easily discern warm vanilla, oak, raisins and the softest hints of citrus hops. There is very little in terms of bitter aroma here, but huge amounts of malt and gooey sweet character. Right away you can tell this is going to be a rush to your palate.

And sure enough, it is. It only takes a small sip - let it rest on your tongue and glide across your cheeks as you would a fine spirit. The texture of the beer is silky, but very oily. It holds a viscus structure tightly in your mouth but releases huge punches of malt sweetness and depth at every surface it touches. Wide and complex caramel and dark toffee malt is the first thing that hits me in a warming and malty sensation. Rich baked fruits show up with the reminiscent flavors of plum pie, prunes, stewed pears, raisins and soft vanilla.

The up-front sweetness is balanced by a darker, more bitter sweetness in the way of molasses, oak, booze (almost brandy like), rhubarb, and a complexity of port and whisky. This beer has a lot packed in here, and there is little if any hops recognizable in the flavor - thus, this is a true English Barleywine, not an American Barleywine. I was hugely impressed by the weight and character of this beer, and would actually love to try it with a flourless chocolate cake, or even just pieces of high percentage cocoa chocolate. If you do have the oportunity to enjoy this barleyine, be sure not to serve it too cold, it deserves a summer vacation.

O: been loving barleywines this year, and I really enjoyed this one - reminded me somewhat of a darker version of Dogfish Head's Raison D'Etre (which is considered a strong dark ale) probably due to the raisin flavors that permeate the beer. Definitely worth a try while there're still some on the shelves.

A – Khaki head leaves a light lace and sticks around with ok retention. Mahogany body with ruby rust highlights.

T – Sweet with raisin, caramel, cantaloupe, maple syrup and old wood. Rolling booze on the backend keeps its teeth to itself and stays relatively placid.

O – Complex with an interesting semi-tropical note, but edging a shade too sweet.

Poured from bottle into CBS snifter glass. Pour looks like liquified caramel or toffee. Super cloudy, auburn brown color. Pretty much no head at all, but not too surprising for 13.8% ABV. The site says 12.5, but the bottle says 13.8. Smell- rough boozy raisins, caramel, fennel alcohol. had this on tap about a yr ago, I remember a lot of dark fruits, but I'm not getting much aroma at all this time with the bottle version. Taste- WHOA. Huge sweetness comes in the form of caramel and toffee, and a surprising tight carbonation that I wouldnt guess was even here by the appearance pierces my tongue. Maybe a little bit of green apple tartness, but it seems the profile is just dominated by sweetness and caramel/raisins. This is closer to an old ale than anything, and could have probably aged for many many more years. I could see putting this one away fro 10+ yrs. The booze is really rough on this one, and thinking it might really mellow over time. Overall, this is a pretty big beer, an aggressive nightcap in which to watch my Astros get the shit kicked out of them yet again...

This was a brutal beer. It was good, but brutal. You feel every bit of the 13.8 alcohol percent.

Pours a light brown with an orange tint. When I poured there was barely any head.
The smell was incredibly boozy and scotch like. One could tell that this was aged in scotch whiskey barrels without ever even reading about it.
The taste was boozy, yeasty , and earthy. The earthiness was probably imparted by the aging process. It left my mouth really dry. Not for your average beer drinker, but I enjoyed it. It is a bit expensive though at 1 dollar per percent of alcohol.

Bought a 11.2 fl oz bottle of this from Payless Liquors in Fischer, IN for $8.99. Poured from the Blue Mikkeller looking bottle (but then you can see BrewDog shield on the cap and front label, a collaboration brew possibly?) into my 16oz Dewey's Pizza Pint Glass. Has batch 243, bottled on: 07/05/09.

Will this review make my Beer Karma level go up a notch to Zealot? Only time will tell.

Aroma- One of the richest brews I've had this month thus far! Strong and rich with a nice apricot aroma. A bit of a sherry cask, whisky aroma is here and forms the strength of this aroma even more. Great qualities!

Appearance- Pours not even a .5 finger head but bubbles taste on the top of the beer. Has a dark amber, cloudy body that looks like some type of v8 concoction. Leaves no suds, lacing, or anything behind on the glass.

Flavor- A sweet caramel and nutty taste starts off this brew. Its very intense and once again has a nice fruity character that hangs around. After this, hops come in (even though hard to detect) and are very hidden which leaves the hop bitterness to a light level. The complexity of this brew was so extreme that I was going back to drink for the review so many times, my glass became quickly empty.

Overall Impression- This is a tremendous example of an English Barleywine! Very rich, strong, and has awesome character to it. At times, this one was much too complexed for my palate and nose, so I went in many times very more tastes/smells and I found my glass to become more and more empty. I'm excited to see this brew @ a Liquor store soon so I can enjoy it again! Watch out though, this one will creep up on you!

Pours a brownish orange with small head. Smell has hops, sweet caramel malt and a little bit of oak. Taste has a nice balance of sweet malt and bittering hops, some brown sugar too. Body was a little bit thin for the flavor. Although I've had a few Brew Dog beers, this was my first taste of Mikkeller. Enjoyable.

Bought a bottle tonight so I had to try it.

S: Sweet, Toffee, caramel. I didn't get any alcohol aroma either.

M: A bit thick but went down smooth. Carbonation was very good.

Overall: ABV's were high but it didn't come through in the beer.