How To Disappear Completely
BrewDog 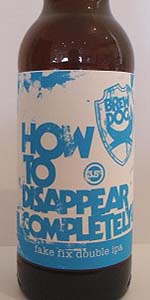 Notes: We've dubbed this 2.8% beer an ‘imperial mild’ because it’s mild on alcohol but unquestionably Imperial on flavour. Dry hopped with Cascade, Centennial and Amarillo this is an ale with a big character that belies its small ABV.
View: Beers | Place Reviews
Reviews: 5 | Ratings: 12 | Log in to view all ratings and sort

A 330ml bottle with a BB of Sept 2014. Acquired a while back from the Brewdog webshop. This one comes with a split personality - the hop profile of a DIPA paired with the malt profile of an English dark mild and a low ABV to boot. Could it be a match made in heaven?

Tastes of some seriously aromatic hops with subtle malt undertones and a dry, bitter finish. Notes of grapefruit, orange peel, citrus, mild pine, faint white fruit, roasted malt, light caramel, a hint of chocolate, earthy yeast and stewed hops. A touch of cardboard in the background. Highly attenuated, followed by a strident bitterness upon swallowing. Mouthfeel is smooth, dry and tingly, with good carbonation and decent body for the style and strength. Somewhat astringent, accompanied by an aftertaste of fruity aromatic hops, leafy bitterness and faint malt.

Rather nice - not a traditional mild in any sense whatsoever but certainly a tasty beer. Looks great; meanwhile the aroma and flavour are stuffed to the gills with fruity hops yet still leave some breathing space for the dark malts. Body is OK - a bit thin but not surprising given the ABV. Goes down all too easily. Once again, Brewdog prove that you can make a beer with a low alcohol level while retaining an intense character. Would be great if you need to avoid the booze but still want the flavour (DD for example). Worth sampling if you come across it.

Had this on tap at Brewdog Nottingham. This one caught my eye, mainly because there aren't many craft brewers producing the Mild style of beer. Which is understandable, as a drink that started out as a cheap drip tray mixture in local English pubs may not be the most attractive brewing proposition on first glance. The flipside of this, of course, is that it gives a wide scope for interpretation and exploration, as it could be any combination of bitter, stout, golden and pale ale flavours. Brewdog have done this in an exceptional way, combining deep malty english ale flavours with the modern trans-atlantic hop twist.

The beer pours a dark brown/coca-cola colour, mostly opaque with an amber tinge around the edges. The head is frothy with a slighly muddy off white colour, which has decent retention, although not quite on a level with some fuller bodied porters or stouts and thick, suddy lacing is left as the head dissolves. The low abv has possibly helped with retention.

The aroma is a lovely orchestration of dank maltiness and slight caramel fragrance from the malts, combined with a heavy tropical/pine scent from the, in brewdogs own words 'bombardment' of big american hops, cascade, centennial and amarillo. The prominent flavours of the malt bring out a slightly sweeter, dryer flavour from the hops and accentuate the bitterness, giving a different dimenson to the beer than pale ales hopped with the same varieties, although it does have hints of a black ipa/apa about the flavour. Theres no doubting that the hops are the dominant flavour in this beer, but as they fade out theres a strong malty backbone to the beer balances out the fruitiness and bitterness of the hops nicely!

Mouthfeel is a lot thicer than i would expect from this beer, again it doesn't coat your mouth like a stout or porter but lingers a while on the palate.

In my opinion, fills a much needed gap in the market, but that aside, a very drinkable and sessionable beer.

330ml Bottle from Good Spirits Co, Glasgow:
Caramel brown with a large, bubbly and tan head that holds well despite the name of the beer.

Hoppy with lots of citrus and orange zest plus hints of pine as well. There is some dark caramel and malty smells coming through not long after and some tropical fruits too.

Citrus hops and tropical fruits along with some pine like flavours. The sweet malts and caramel appear around the middle and towards the end but it is the hops and tropical juices that seem to take centre stage.

Lively & well carbonated with plenty of fizz and a light medium body with some sweetness and a bitterness from the hops as well. Definitely interesting and not as thin as I had been expecting either but maybe a little over carbonated and a little dry in places.

Starts with a strong and pleasant aroma initially along with a taste that backed it up although as I neared the middle and particularly the end of the bottle things began to fade and the final third turned into a minor struggle to finish but it was good overall.

Very fresh, on tap at BrewDog.
Amber color with a thin head with medium retention.
Delicious citrus aroma of peaches and passion fruit.
Flavor of tropical fruits, fresh tea leaves and sweet malt. Dry and bitter aftertaste.
Very light body with low carbonation.
Interesting given it is quite thin with low alcohol content, ends up with its hops amped up.

I bought this beer from Luvians in St. Andrews, Scotland. They found a box of it in their store after this beer has been discontinued for a while. Luckily I was able to get a few bottles for £1.80 for each 330mL (12oz) bottle.

When you open this bottle you smell the citrusy hops from the centennial immediately. VERY nice aroma that you tend to get in an IPA, maybe a double IPA.

It tastes very nice, I tended to taste more citrus directly from the bottle, but I know that may be psychological just for me. It is quite drinkable, very clean. It has a bittern middle like you get in UK bitters and has a light citrus/bitter finish.

First time I had this beer it had what I'd like to call a Small Imperial IPA taste (like the "small beer" category) because of its low ABV of 3.5%, but the second bottle tasted more like an English Bitter.

Either way, it's a good beer. It's awesome when it has more of an Imperial IPA feel, but the 2nd bottle I had was still good.

How To Disappear Completely from BrewDog
Beer rating: 84 out of 100 with 12 ratings