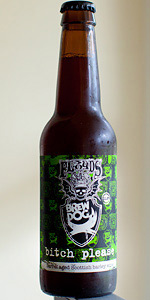 To me this bottle was not at all as good as the cask variant I tried earlier!

3.26/5  rDev -1.2%
look: 2.75 | smell: 3 | taste: 3.5 | feel: 3.25 | overall: 3.25
Thanks to leftpaw for bringing this to a March Madness bottle share a few years ago. Pours brown, dark caramel with rust kind of color and a lot of sediment or something that isn't entirely liquid floating throughout the beer. Aroma was maris otter, unsweeteened cola, hops and their bitterness.

Taste, actually enjoyable, substantial bitterness, alpha hops, this seems like an American barleywine blasted through and American double india pale ale. The caramel keeps coming at you like a PacNW ipa from yesteryear with a bunch of Cascade like hops. There is also a dark fruit like presence as if there was a quad yeast or something used here. Interesting mix of stuff from different styles going on here. Lots of alcohol, its a cold night sipper or something you should share with a few people. Good in small quantities, but after that it got to be somewhat challenging to finish.

Reviewed by kylehay2004 from Illinois

4/5  rDev +21.2%
look: 4 | smell: 4 | taste: 4 | feel: 4 | overall: 4
Interestingly I had this the same evening I had tactical nuclear penguin. It's peaty, smokey and boozy. Like a less boozy TNP. I think those who didn't like it were expecting your typical barrel aged beer. This one is different, worth trying and better than advertised.
May 27, 2015
Rated: 3 by scottiethebody from California

Rated by brewqueno from Texas

Not a particularly appealing beer looks-wise, this beer has lots of sediment visible in the cloudy, muddy brown liquid. The head was about a quarter finger thick, fizzy and rapidly dissipated into a thin lace at the center of the beer. There's steady carbonation apparent and not much else of note.

I get a lot of raisin on the nose, as well as the peaty aroma of whiskey, some boozy astringency and dark fruit. The raisin and peat are most prominent. There's also a bit of a smoky charcoal aroma.

Woosa, this beer is very whiskey-like! A huge, smokey, peaty flavor hits the mouth immediately and lingers strongly on my tongue. With the highly carbonated mouthfeel, this adds a tingling tongue sensation that almost reminds me of what a Seven and Seven would feel and taste like. There are some sweet caramelly notes and earthy hops in there too, it just takes a minute to discover them with the intensity of the previously mentioned flavor notes. As I continue to drink, the raisin notes from the nose emerge a bit as well.

I don't detect any alcohol astringency, despite the whiskey presence, so the beer drinks relatively smoothly. The aftertaste is intense and not faint for the heart, if smokiness and charcoal don't sound appealing to you, I don't advise drinking this, however, I am enjoying it.

I'd say there are deficiencies with this beer and it's not perfect, but it is quite an adventure and a beer I'm not likely to forget. However, I think I paid a pretty penny for this beer and can't justify that again.

The smell is sweet-tart with some smokey notes. Band-aid, cream, gooseberries, red currants and some toffee. Quite a lot of alcohol.

The taste is very woody. It is dry with distinct high alcohols. Whiskey, salt and butterscotch. Quite a lot of oaked notes and some green fruits. Medium body. The aftertaste got hot alcohol, oak and whiskey flavours. The finish is rather smooth with wooden notes.

The carbonation is quite strong. The small bubbles are long lasting in the mouth. The liquid is dry and a bit harsh.

An experimental brew that probably was more fun to make than to drink (at least after a few years).

3.9/5  rDev +18.2%
look: 3.25 | smell: 3.75 | taste: 4 | feel: 4 | overall: 4
Murky brown color with a fluffy two finger head with low retention and floating particles.
Predominant aroma of smoked ham, earthy hops, spices, caramels and peat-ashes duet.
Taste follows nose and definitely a sipper. Flavor of peppery yeast, peat, vanilla, oak, whisky, lots of resiny hops and a citrus, sulfur and earthy hint. Dry and bitter aftertaste.
Medium body with appropriate carbonation. Alcohol of 11.5% abv is well hidden.
Not that complex, but still an excellent assertive choice of Barley Wine for whisky lovers. Nevertheless, if you never liked good Scotch and it is expecting a fruity Barley Wine, don't pour it in the drain, simply don't open the bottle and send it to my address. We'll both be thankful.