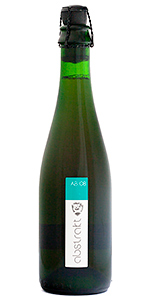 The colour is pale brown, the liquid is clear. No head whatsoever.

The smell is quite sweet with notes of cocoa, milk chocolate bars, smooth coffee and an odd note of wet paint.

The taste is overly sweet. Lots of cocoa and some coffee flavours. Medium body. Bitter almonds and even more cocoa in the aftertaste.

The carbonation is weak; the liquid is smooth.

Is is a bit oxidised, yes. But at least, it isn’t damaged by the cellaring.

Blonde imperial stout? Since hearing about this brew, I was on board. Let's see how they execute it.

Pours far from blonde, but then again, far from imperial stout: a solid amber hue, with a fine, but very filmy head of white. Some spotty lacing forms. Body is heavy and solid. Carbonation is minimal when the beer is static, but forms in fine rivulets as it's tilted. Overall, decent: and excitingly different if it's really an imperial stout.

Imagine I have my eyes closed. Then, I can almost believe it's an impy stout from the aroma. It has a deep coffee-like overtone, that tends more towards chilli when you can actually see it. It's something of a stretch to imagine it really as a stout.

Taste: well, there's some trickery going on here. I can genuinely see the genesis as an imperial stout, but again, it's almost purely a coffee overtone to the beer, which lends a roasty sweetness to the brew. Otherwise, it has a slightly sickly vanilla character, which does carry the character, but again, it feels a little like a cheap trick.

Feel is solid and smooth: it matches up with whatever else is going on.

Overall? Well, you know what, this delivers wholeheartedly what it promises. This was billed as a Blonde Imperial Stout, and that's what we get (maybe besides the genuinely blonde colour). But I can't imagine this was easy to accomplish, and I'm impressed at BrewDog even having the balls to try such a concept. If I were blindfolded, I genuinely believe I would have guessed this was a big imperial stout.

Where it fails, it fails, but as a concept brew, as a piece of artwork: I'm on board.

Clear golden color with almost no carbonation or head. A really spicy nose to this. A chili pepper aroma, perhaps? Or maybe it’s just the booze and smoked malt. Anyway, a touch of caramel and sugar in there, too. The flavor is really weird and kind of green, almost like bell pepper. Booze and sweet sugar are there, maybe some licorice notes. Not sure what the point of this was.

Deconstructed Blonde Imperial Stout, at least according to the website.

A: Pours clear ambet with a really small off-white head that leaves almost no lace.

T: Sweet malt, smoked and heavily roasted. Some vanilla and even peat. Chocolate.

M: Rather long smokey and bitter aftertaste. Full body, and very low carbonation. Smooth, but the alcohol is quite obvious.

O: Crazy - it smelled and tasted very like an Imperial Stout but the color was wrong... Interesting, though.

A-- Poured a clear, honey amber color. Layer of bright white film that quickly recedes to a ringed collar. Not much head retention and just a bit of lacing. Some obvious alcohol legs but I like color. Very vibrant.

S-- Smoke, peat, ash, candied orange and coffee with a touch of chocolate. Very fresh and green coffee beans. A very nice nose as a sort of combination of a strong ale and imperial stout or porter.

M-- Smoke, char, ash, and coffee in the finish, but quite dry. Low carbonation and slightly syrupy heavy feel. A little bit oily in the front and mid. More of a strong ale at this point.

O-- Interesting concept. Kind of a combination of two styles. The strong ale part is a bit unrefined but can be a really good in time. Still a bit too boozy and syrupy. Might want to try this again later on and see how this progressed.

An odd beer, but rather nice, a few years aging might be interesting.

Because one Abstakt beer wasn't enough to taste, André provided another one. Thanks again! On to the beer:

Brilliant orange in color with a solid ring of head as well as lace. That's strange....it smells like roasted coffee beans. In a paler colored beer? Either my eyes or nose are playing a trick on me. Dabs of orange is more like it.

The fun continues. Coffee, oranges, brown sugar, and roasted beans. If anything, it tastes more like a stout than a golden ale. The alcohol is hidden well, not a boozy mess thankfully. Its almost full body is well received and rounds out the beer.

Another Abstrakt, another fun beer.

Huge thanks to dgilks for this one.

Pours the colour of sherry with reasonable head and lacing. Head doesn’t last that long.

The nose on this is spot on. Smoke, chocolate, whisky, like a typical well-made porter. The cocoa nibs are seriously evident here. There is a fruity malt base barely detectable past the chocolate assault. Also some muscat grapey qualities.

Taste brings smokiness, alcohol and sweetness in equal measure. Actually ends up being well-balanced initially as a result, although later as usual these qualities can be intrusive for someone downing a bottle themselves.

Overall this beer was better than I expected. Really interesting conceptually and when you drink it.

A Golden Imperial Stout brewed with a range of "stout-like" ingredients.

Sweet, caramelised malt with plenty of alcohol, cocoa and some peaty smoke.

The palate brings out more flavour including some nice fruitiness, some bitterness, more toffee and a touch of liquorice. The chocolate and mild smokiness is very, very nice. There is a slightly odd note that sits underneath it all but I quite like the overall effect.

This is really like a stout but without the roast notes. The residual sugars and light oak tannins add some depth and body reminiscent of a big stout as do the cocoa, coffee, liquorice and oak. Very nice.