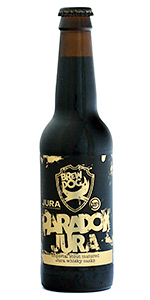 A - pich black. One finger tan head fades to ring of film, a little lace.

S - intense booze, chocolate-box candy, sweet. Not as much vanilla from the barrel as I expected.

T - massive, complex, pepper, sweet chocolate-box (concuring with another reviewer almost like a strawberry-creme) , single malt, mellow roasts, but really this taste is almost bigger than beer, and demands a circumspect approach. Vanilla from the barrel has a fight on its hands with the pepper.

O - one of the biggest beers I have ever had, must say. However, the alcohol burn really takes over and affects drinkability. Like drinking 330ml of Port. (!) Would be a great beer to share, or at a tasting, tho.
I was sooo looking forward to this, but such a let down in terms of drinakability, not necessarily flavour, in comparison to Paradox Isle of Arran.

Pours a dark brown with hints of red and burgundy with very little to no carbonation. Strong whiskey followed by peat in the aroma - smells great. Taste is whiskey, vanilla and spice from the barrel and hints of chocolate malt, however not as good as the aroma. Certainly a sipper. Probably could have used a few more years in the cellar.