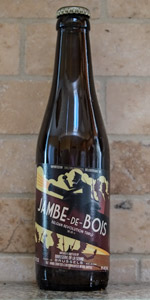 Notes: No Dutch people have been harmed in the making of this label.
View: Beers
Reviews: 48 | Ratings: 203 | Log in to view all ratings and sort
Reviews by Brutaltruth:

This nice ale, a first for me from this brewery, pours a hazy light yellow with a dash of amber
in there with nice tight beaded white bubbled head and frothy lacing. Nose of coriander,
yeasty goodness, Belgian candy sugars, herbal hops, and a light lemon grass aroma. This is
rather complex in nose and taste. Flavors are Belgian candy on the front with a light lively
mouthfeel. Coriander and lemon grass dance about with a light sourness that is far from
unpleasant with a dry finish and very light bitter aftertaste. Almost a Belgian sweet tart, this
ale expands in flavors as it warms making a re-review certainly coming in the future. Very nice.

Poured into a Nostradamus flute glass. Pours a hazy light straw with gold highlights and a fine two finger white head with good retention and lots of lacing. Nice active carbonation. Interesting aroma of sweet apple and pear juice, bready malt, light citrus; nicely floral. Flavor starts very subdued, but develops into remarkable sweet pear and stone fruit, honey, light citrus, finishing with nice hop and herbal bitterness and residual very nice fruit juice. Quite complex and interesting. The middle is quite sweet but the finish is more semi-sweet as if the herbal elements are drying out the fruit components (but not winning). Medium bodied with light creaminess. I really liked this tripel. It has some sweeter than normal elements, but there is so much going on here that it the sweetness seems perfectly balanced. This is a very nice Belgian ale that I will be picking up again very soon. I'm two for two for this brewery now and hope to see other varieties.

A 330ml bottle with an uncertain BB date (not marked). Purchased from a Belgian webshop more than a year ago and stored in my garage; I hope it hasn't aged too badly. Jambe-de-Bois translates as wooden leg - the label calls it a Belgian revolution triple.

Poured into a Duvel tulip. Bottle conditioned. A hazy golden-amber hue with good carbonation and plenty of chunky sediment. Produces a huge head of creamy white foam that lasts for a few minutes before slowly reducing to a frothy surface layer. Aroma of earthy Belgian yeast esters, tart apples, mild coriander, a slight fruitiness and a hint of spice. Faintly sweet, with a hot, solventy note of booze in the background.

Tastes of fruity, earthy yeast esters with a mildly spicy character and a dry finish. Notes of earthy yeast, unripe apples, indistinct fruitiness, mild coriander, subtle spice and stewed hops. Slightly peppery. A weak bitterness upon swallowing, along with a significant dose of solventy alcohol. Mouthfeel is smooth, dry, spicy and tingly, with good carbonation and nice body for the style. The booze adds an oily quality. Rather astringent, with an aftertaste of earthy yeast and fruity hints.

So-so. The alcohol is a bit excessive and the hint of apples suggests a flaw. It's OK, but the aroma and flavour seem pretty average. The mouthfeel and body are nice though. I like this brewery and I was hoping it would be better; it could be that age has sullied it's quality a little. I'll have to re-review a fresher bottle when I can get one. Decent but no need to go out of your way to find it.

Poured on tap at Trappist Provisions (where else?) into a 9oz wine glass.

Pours a classic tripel golden pale color, with some amber hues around the glass. Contains a frothy, thick head filled with bubbles that goes about 2.5 fingers high in the glass, only to recede but never fully give up throughout consumption. Leaves behind a ton of cobwebby lacing in a real appealing manner, and carbonation lasts a good long while. A terrific presentation - I have no complaints here.

Smells unlike any tripel I've ever had, and I wouldn't expect any less from these guys over in Brussels. Rather than the common, ad nauseum profile of candi sugar, banana, vanilla, and spices, this is far more down to earth and diverse, rather giving off tons of vinous notes and also that of Eastern spices. At the front I immediately get notes of dried pear, green apple, and under-ripe pineapple, and then lots of interesting spices ranging from cumin, cardamom, and cinnamon, as well as a wet straw, grassy flavor that is a combination of the funky yeast, bite-y grains, and dry hopping in place. This is like Taras Boulba but far more aromatic - and the extra alcohol is perhaps the main factor that makes the difference.

Tastes very similar to the aroma, but ranges far more in between de la Senne's experimentation here and the classic tripel flavors. There are notes banana from the yeast, as well as a hint of candi sugar, as well as vanilla, but nothing is too overdone. Instead, the wonderful pear and green apple combo comes in, as well as more emphasis on the spices. The finish is wonderfully dry, with notes of dried leaves, grass, and a kick of mineral flavors resembling wet stone. The grains provide a bite that, as in all of this brewery's beers, is a bit off-putting at first but becomes ever so more fascinating the more that I try them. Melded with the funky yeast (of tart apple notes) as well as the dried hops, it's a really rustic, refreshing, and fairly complex experience. No booze shows through on this. A real pleasure to drink - I almost asked for another.

I'm starting to believe that this brewery may be one of the most unique in all of Belgium, and this beer is a good example why. I've never had Belgian beers this hoppy, bite-y, and simultaneously funky so consistently in a brewery's catalog, as well as ones that seem to push the envelope of the style at hand. This may easily become one of my favorite tripels to drink on a regular basis.

This beer is good triple beer