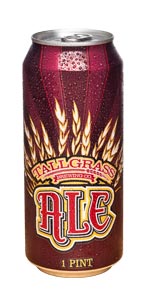 Notes: Tallgrass Ale is the flagship beer of Tallgrass Brewing Company, and we think it will be your new favorite beer! Truly a craft beer, the recipe was first brewed by Jeff as a 10-gallon batch of homebrew. Of all his homebrew recipes, Jeff chose Tallgrass Ale as the flagship beer because of the beer’s surprising light body, extraordinarily smooth and balanced profile, great taste, and clean finish. The first time Jeff brewed Tallgrass Ale he thought it looked a little too dark, but after he kegged that first batch, the finished beer was really, really tasty! That first little 10-gallon batch of Tallgrass was gone way too fast!

The beer was different from anything he or his friends could find on tap or on the shelf. It was a beer that was a deep chestnut color, yet had a great flavor and was so light tasting that it kept you wanting more. The distinctive look and taste of Tallgrass Ale comes from our unique blend of German, English, and American-style malts and a generous helping of both American and traditional English hops. These ingredients, our English brewer’s yeast, and the Flint Hills’ excellent brewing water gives Tallgrass Ale a distinctive, toffee-highlighted taste and smooth profile that is always drinkable.

View: Beers
Reviews: 94 | Ratings: 161 | Log in to view all ratings and sort
Reviews by mshanecrowe:

Another sampling from the Beer of the Month Club.

A flavor unbecoming to the style. Watery flavor, slightly sweet, a little malty, and the middle tastes are sour. Finishes bitter and sour.

Not the favorite brown I have ever had. Sour, unbalanced, watery, can't see wanting to drink this ever again.

Presentation: 16 oz pint can, part of an 8-pk brewery mixed pack. No date to be seen, poured into an imperial pint.

Smell: A bit unique, actually, this doesn't really smell like a typical brown ale or the traditional English pub ale I was expecting. There's definitely some generic sugary sweetness here, as well as a hint of almost rummy brown sugar, some darker toasted malt that's not quite bready, not quite caramelly, and not quite toffee-like...it's also not really roasted...I can't quite pin it down. Mild yeast esters, and some kind of odd hoppy notes. The website says this uses English, Belgian, and German barley, as well as English and American hops. I really have no idea what's in here at this point. It's interesting, but I don't love it.

Taste: The taste is a bit more traditional. Mild bready and toasted malts. Ends nutty and lightly dry, with mild fruity esters. It's kind of like a cross between a mild-mannered American Brown Ale and an English Mild. Everything thus far is good, but it gets something of an odd sweetness (almost sugary) before finishing a bit bitter, and there's just something here that doesn't work for me. It's just a bit odd.

Mouthfeel: Lightly carbonated (in the English style), which works well with the maltiness and the lowish abv. Slick and smooth.

Overall: I really enjoy some of Tallgrass's brews; the Oasis is a serious player; overall, however, this is not probably one I'd buy again. There's definitely notes of nice nut brown in here, coupled with a lightly roasted English mild, but there's also something else that just throws everything out of whack a bit.

Poured a dark mahogany color with a 1.5 finger off white head that dissipated quickly and left little lace.

S=some bready, steely aromas has a sight dopplebock characteristic to it to me.

T=slight toffe flavor, and again a bit bready. Its really light and refreshing though, and really drinks fast. Not much hop presence, just well balanced.

from my Sept BOTM Club shipment...

T- sweet carmel, toffee, honey roasted peanut flavor with some semi-burnt buttered popcorn in there... little bit of a bite on the back end.

Pours a dark chestnut brown color with golden copper edges when held to a light and a 1.5 finger frothy light beige head that slowly fades into a lasting ring. Sporadic streaks of lace left behind.

Slight toasted aroma with hints of sweet malt and crisp, earthy hops. A bit more roasty than I expected with hints of toffee, caramel, biscuit and nut.

Fuller bodied and more hop forward than expected with some dry earthy bitterness that compliments the roasted malt notes. Slightly toasted with sweet malt notes, especially caramel, biscuit, toffee and hazelnut. Slight coffee presence as well as some subtle creaminess that adds texture and fullness to the palate. The bitterness and roasted character overpower the sweeter malt notes a bit much for my liking and overall the beer could use more balance. Not bad really, just kind of average tasting.

Really surprised by this, not in a good way. Their IPA and Hefe were much better.

This brown ale looks just great, has decent lacing with a small but lingering head. I am not exaggerating when I say that the smell is atrocious, it smells like old sweat socks that have been in the trunk of my car for all of July. Taste is somewhat off - lacking the malt sweetness I was anticipating, but has more than it's share of off-skunkiness. Drink by date is Nov 2009, so I should have plenty of time before this "goes bad" (whatever that means). I am severely disappointed in this beer and will not be able to finish it. Not sure how this is getting a "B".

Not sure if the off-taste and smell was due to handling by distributor or what - I bought it from the neighborhood supermarket that does a large volume business with generally quick turnover. I opened another bottle from the same 6er, and it was as bad.

From the BOTM Club:

Appearance - Pours a dark brown color. About a half inch of head that quickly dissipates and leaves little lacing.

Smell - Smells of caramel, malts, bitter coffee, and a hint of chocolate.

Taste - Similar to how it smells. However, there is a very "buttery" characteristic to how it tastes which makes it a bit odd. Can taste nuttiness, coffee, and a bitterness at the end.

Mouthfeel - Light to medium bodied. Decent carbonation but honestly could ask for a bit more.

Drinkability - This brown ale is not really my thing. One and I'm done. I look forward to trying their IPA, however.

A - Tallgrass' Pub Ale (as it's labeled) pours with a tall and long lasting ivory head that lingers for quite a while before assimilating into the beer. Chunky lace adheres to the glass above the beer's lovely clear tarnished deep amber colored body.

S - Dusty cocoa nibs and bakers chocolate emerge as the first noticeable aspects of the aroma, filling the nose with an already full presence. Following closely is a very earthy hop aroma which suggests gardening in the spring; cut grass, damp soil, and old wood chips. Both the chocolate-like presence and earthy hop tone blend well with the rustic, bready amber malts for a rich aroma sure to follow through into flavor.

T - Toasted amber malts present an earthy, bready flavor not that different than what the aroma offers, though much of the chocolate-like notes have seemed to mellow into a more submissive undertone rather than bold entry. Likewise, the earthy hoppiness remains present but has also married the malt profile further for great balance.

M - A smooth mouthfeel entry leads to a crisp carbonation bite that seems to keep the fuller malt body in check for ease of drinkability, finishing out with a dry, mildly bitter earthy hop and roasted malt bite. Tallgrass Pub Ale is well balanced to say the least!

O - Tallgrass Pub Ale manages to quite successfully pack full flavor and robust body into a dangerously drinkable beer, perfect for, well, the pub of course! The balance is there in feel and flavor profile as the beer teeters between smooth and crisp, malty and hoppy. Very well done indeed.

I call it an American Adjunct brown ale. At this end of the spectrum there's not much going on. Murky dark red-brown, but a decent head. Feels good going down, and has a sparkly tang. Just a touch of acidity. Barest warmth of caramel malt. Not much scent.

Drinkable but on the insipid side. Still, it has a touch of roasted flavor. Goes down easy enough if you don't mind the style.

Thanks to ThirstyHerf for this can!

Dammit, I'm starting to feel like WoodyChandler here, what with all these cans (or is it CANs...?) tonight. This one pours a partly cloudy sunset rose-amber topped by a finger of khaki-cream foam. The nose is a bit hard for me to describe properly, but these are the words that come to mind, regardless of true propriety (basically, I can't put the real scents into words, so these are the closest approximation): hot cinnamon, toffee, light coffee, very light cocoa, cilantro, nutmeg, and light maple syrup. Frankly, the combination comes together in such a way as to make me do a negative double-take, as though my nose refused to accept the strangeness it found itself involved in. The taste holds notes of cinnamon, red apple skin, red grape, light raisin, rich caramel, and honey. Honestly, for a brown ale, this is way the hell too fruity, but it pleasantly evokes a nice Belgian brew. The body is a light medium, with a very light moderate carbonation and a smooth, creamy feel. Overall, this is a pretty poor example of a brown ale, frankly, but still an enjoyable, tasty beer regardless. Maybe a reclassification is in order, at least...

I have to say the tall cans are what attracted me to Tallgrass in the first place. This is their second beer I have had.

Poured in a tall wide flute. Dark amber yet still clear, lots of head, 2+ fingers. A bit too quick on the head forming. Though it settled quickly and I poured the rest of the can in.
Nutty smell, maltly and then a bit of smoke.
At first just a malty taste, then turns to nut, cream, milk at the end. The was a big change in the profile from normal brown ale to really tasty.
Medium body but still clean. Moderate carbonation.
The ending was almost milk stoutish but it works really well. A well built drink.

a - poured from a 12oz bottle into a pint glass. opaque, dark amber with minimal head that receded into a thin film. spidery lacing.

t - smooth coffee at first impression. the roasted malt comes across in the aftertaste.

d - nothing outstanding, but not a bad quaff. could work as a session. will probably buy again.

Pours with a very thin tan head into a pint glass with a muddy brown, almost coffee color.

Simple on the palatte, not much on the back end. Straight forward malt, light coffee.

This beer either has really tiny, prickly bubbles, or it's kind of flat. It's too early in the morning, and my tongue is asleep.