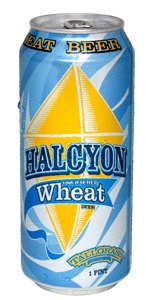 Notes: We originally brewed Halcyon as our first summer seasonal, but since all the Halcyon fans (a.k.a: kiteheads) asked so nicely, we now brew this magical brew year around. Besides, who doesn't want a little taste of summer on a dark winter night?

We are proud of all our beers, but Halcyon is special. We are in “the wheat state” after all, so the pressure was on us to make a wheat beer, but we knew it had to be great. Halcyon Unfiltered Wheat is the result of that Midwestern angst, an all-American wheat with real Kansas-grown grain in the brew.

We start with raw Kansas white wheat in the mix to give it a nice edge, but what really makes it shine is the hops. We use “hop-bursting” late in the brewing process and this gives Halcyon its palate of tropical fruit flavors & aromas with a bright and refreshing taste like the best days of summer.

12 oz can poured into a weissbier glass. Solid two fingers of dusty white head caps the surface. As the foam recedes, spots speckle the glass. Body color is a hazy golden orange. The glass is illuminated when held to the light, but I can't see through the glass.

Smell has a sweet banana and mango fruitiness. There is a fresh bread dough character, slightly yeasty. Taste has quite a lot of the banana esters, but it is not overpowering. There is a secondary lemon flavor that cleans up nicely. There is a faint peppery tingle that comes in at the very end.

Mouthfeel is a little heavier than most Pale Wheat Ales. This seems to fall some where in the middle between a Wheat Ale and a Hefeweizen. There is a mild creaminess in the texture, but is not filling like a lot of Hefeweizens can be. I'm liking this beer more and more.

Enjoyed on tap at Bier Station in Kansas City. Served in a traditional weizen glass.

Appearance - Pours a body of golden amber color with just a bit of brownish shadow from the unfiltered haze. Atop the body sits a fluffy three-finger stark white head. Retention is moderate, and it begins to dissipate slightly, shrinking down by about a half finger to reveal a healthy curtain of Lorraine Swiss lacing along the side of the glass.

Smell - Bright citrus and rustic grain come to the forefront, and you can tell this is an American wheat beer (rather than a traditional hefeweizen) by the absence of any kind of fruity ester characteristics. Instead, the aroma is crisp and herbal, with aromatics coming through from the hopping rather than the yeast profile. That said, there is a bit of pepperiness that I can only assume is a result of the yeast used.

Taste - This is a bit hoppier in flavor than I remember, but I've typically had this beer right out of the can at outdoor summer events, rather than served in a glass. It's a nice flavorful beer for the lake or a ballgame, but out of the glass, the hop characteristics shine even more, with a wonderful blend of grassy herbal notes and generic citrus zest that seems to lean towards lemon, but with notes of orange as well. There is a white pepper component that originally came through in the aroma, but is a little more obvious here. And rounding it out is a substantial grain base that gives the impression of rustic wheat bread, with just a slight sweetness as you might get from fresh bread.

Mouthfeel - Light bodied and moderate carbonation, with a creamy, almost round feel on the palate, which I tend to associate with the style.

Overall, this is a criminally underrated beer in my opinion. I don't know if I would have said that before I enjoyed it out of a glass, which really seemed to kick off the aromas in a way that enhanced the flavor as well. Tallgrass really has the makings of a solid portfolio of beers, and this is one of their best.

A - Pours a extremely pale yellow with a monstrous head that hands on for dear life. Nice chunks of unfiltered somethings floating near the bottom

S - Slightly yeasty aroma with hints of lemon and perhaps other citrus. Also has a very very slight peppery spiciness to it

M - pretty thin mouthfeel. Very slick. Refreshing in the mouth and dry on the finish

O - Nice summer wheat beer. Very drinkable but with more kick than most wheats. Not something I would crave all the time but can see myself picking it up from time to time.