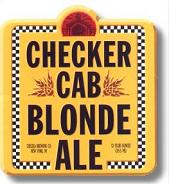 Notes: Inspired by the iconic Yellow Taxi of classic New York City, this Pilsner-Lager Blend is as unique as the city it “Hails” from. Hail a Blond Ale!

This crisp, straw-colored ale is brewed in the style of a German Kolsch beer. Aged cold, its taste resembles a Lager. Imported malts are balanced with the delicate notes of noble hops to create a pleasant ale.

Had this on tap last night at one of the House of Brews in midtown. Seeing that I can't get this beer in Jersey and it's was one of the few on tap there that I hadn't had, I figured I'd give it a crack. This was listed on the menu as a Kolsch but after seeing how light and malty this was, I could see why this would be classified as such.

Light pour to this - just like straw with not much of a head and hardly any lacing to be seen. Very malty with grape, apple, and pear flavors with a grassy aftertaste. This went down easily but not in the good sense. The carbonation was nearly nonexistent and since there was *some* body here, this didn't fall into the category of the mass-market brews or summer ales that are light as water. That being said, there wasn't any sweetness, bread, or complex fermentation in the mouthfeel. Just beer that went down without much thought or effort, with only a hint of alcohol to be found.

Sure, I could have had lots of pints of this but one was enough to give me an idea of what this beer was about. Sure this may be enough to refresh someone on a hot day and introduce them as to what's possible with beer but I felt like this was a missed opportunity. If this was a bit more carbonated, crisp, and filling, it could stand out from other lighter beers. I'd sooner have a Sam Adams Noble Pils than this and this is one beer that I'll probably not be hailing again anytime in the near future.

Pours clear yellow with a 1/4 inch creamy white head; smells of wheat, light malt, light hops and a little lemon, but not very pungent at all on the nose.

Tastes of wheat, yeast and lemon up front with mild hops and malt trailing to the dry finish. There's a mild malt skunky-ness that is not bad at all in the finish, but that might turn some people off or it may have been due to dirty lines at Wildwood in NYC. Very crisp and light with high carbonation and a lot of bubbles moving up as the beer sits. Decent lacing for a blonde ale, and overall very easy to drink.

The taste is on the dull side, but for a blonde ale it wasn't bad and is the type of beer to drink all night or with food. It is better than most light beers, but just boring and conservative.

On tap from Rattle and Hum NY. Pours a clear light yellow with a small head which fades rather quickly. Faint smell of malt. Average tasting, ever so slightly bitter but no aftertaste. Good mouthfeel. Nothing special. Good drinkability although not my particular favorite.

- Free sample at a Chelsea Brewing tasting. Special thanks to Big Z's in Huntington NY -

A - Pours light yellow with little head and no lacing.

M - I've seen other reviews saying this was overly carbonated - I found just the opposite. There was too little carbonation. Perhaps that was the fault of the bar/keg rather than of the brewer.

D - I've come to expect much more out of blonde ales. I didn't find this refreshing or interesting at all.

I'm really shocked at the positive reviews for this beer. Maybe this one falls on dirty lines and a somewhat flat keg?