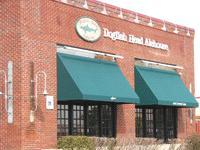 View: Place Reviews
Reviews: 62 | Ratings: 93 | Log in to view all ratings and sort
Reviews by dtivp:

From the outside and when you first walk in the place looks like your basic chain restaurant. Then you run into the chalk board listing all of the Dogfish head beer on tap. You then realize I am in the Dogfish Head world.

The atmosphere was nice with a nice sized bar area, a spread out seating area with a lot of Dogfish head stuff around with a few TV's, nice decor for aa alehouse.

The servers were very friendly and had very good beer knowledge. They were very timely and made numerous checks to make sure you were having a good experience.

The beer selection was good and gave you a very good representation of the Dogfish head brews both on tap and bottled.

The food selection was good, I recommend the spicy calamari and the chicken and shrimp club on dark rye was very good. The menu offered a nice selection of salads, sandwiches and a few entrees.

Over all the quality was good with a decent value. I had a very good experience and will definately stop again. Hopefully the other Dogfish head alehouses are just as good.

Great mix of DFH centered bar and decent brew-pub fare restaurant. Staff is awesome... always cheery, helpful & attentive. Draft selection is great if you want DFH...haha. You can check their taps online to see what rotating beers are available... which is awesome... great to find the elusive 120 on tap! Food is better than average pub-fare... Steak Bomb Sandwich deserves a shout out! All-in-all, awesome DFH centered stop if you are in DC!

I made the pilgrimage at last!

Vibe: pretty on point. Tap room feel, with the speed and service more common to a chain restaurant, which has pros in addition to cons.

Service: Akin to an Applebee's. It was somewhat busy when I went and our waiter wasn't around much. But there were lots of servers and busboys and so forth.

Selection: pretty much most of what they make, plus a few unique things that I've not seen available anywhere retail (at least not in my area). Worth a trip just to see World Wide Stout on tap!

Food: was Ok. Menu reads a lot like Applebee's, but execution is better (and food is hopefully fresher). We just ended up splitting a pizza and getting some off-the-wall spring rolls that were pretty good for what they were. Don't expect the food to blow your mind, but it's not bad. The food is just there to go with your beer.

It is very nice to have a Dogfish Head Alehouse so close so that one can get their great beers on tap! The service was great. Big place that can accommodate a lot of people. Happy hour seems to be a good time to go!

Overall had a really nice visit. It's basically in a strip mall so not a lot of character from outside. Inside feels like a typical chain restaurant.

If you like Dogfish brews you'll like the quality. Pretty nice having so many of their options on tap. Decent selection, price seems about in line for beer in the area (it's NoVa so yeah, no shock on $9 Burton Baton or whatever). They had a nice selection for Dogfish options but not exactly perfect - we missed 120 by a day.

Service was fast and very friendly.

Food was maybe a step above a Ruby Tuesday type chain. There are some interesting options but nothing mind blowing. Nice bar food to go with some beer.

Being a few miles from my brother's new apartment, visiting a Dogfish Head satellite location became a worthy goal to hit. Well, mission accomplished. On the outside, Dogfish Head could be confused for a national chain restaurant, but on the inside, it becomes a relaxing place to grab a beer without the corporate vibe. There are plenty of seats inside, and even the oval-shaped bar could seat at least 20 people. Several TV's around the bar show sports and news, a well-lit interior keeps the mood warm and happy.

Dogfish Head's calling card is the beer, and 14 different taps of its own beer is a great place to start. A handful of large format bottles from Dogfish Head are available too. 60 Minute IPA, Indian Brown, and Midas Touch, and Burton Baton on-tap, Chateau Jiahu from the bottle among those available. Pints start at $6.50, and while the beer is good, I was disappointed that all I got was a clunky shaker pint.

Very good service complimented the beer. The bartender could easily carry about a conversation of the house beer, as well as providing insider details of capturing a 120 Minute IPA when released. Topping the icing and cake is the food, which is more than acceptable. I ordered a New York steak and got it just the way I liked. I can't comment on the hamburger, but my brother really dug into what he had.

Dinner and a drink? Dogfish Head is just the place, and it won't totally drain your wallet.

So I thought we were due in DC for a concert but I got it wrong- it was a week later. Still we made it down there, and our hotel was a ten-minute walk from the Dogfish Alehouse in Falls Church.

There we walked on a Saturday night at around 11pm, too cold for my short-sleeve shirt. As I got in to the jawn, I ordered a Palo Santo to warm me up.

The draft list is great but mighty pricey, and includes 17 taps such as 60, 61, 90, Bitches, Theobroma, Midas, Burton, Palo, Black-n-Tan (Chicory+90) and the not-listed Claus (Palo+90, a local exclusive apparently named after a regular). I was shocked when the bill came and I saw the $9.50-tag for draft brews. WOW! Serious sticker shock…

The food menu could use some work to make it more interesting, a little more veggie-leaning and overall “better”. As it is, it is mostly calorie-heavy pub classics and pizzas. We had the crab-cheese dip and it was delicious, but a total fat bomb. The pizza was tasty, but hard to digest late at night.

Service was super friendly and knowledgeable, and the atmosphere was just right. A big place, it was almost empty when we visited. I was worried the live music would be too loud as it typically is at the Rehoboth pub but that was not the case. I would definitely visit again when in the area, but maybe stick to one beer or try to hit happy hour for lower prices.

Beer was awesome, and we had great service. The only downer was the fish in our fish and chips. Not very special. The chips were great as was the chipotle tartar sauce. Would go back, but try some other dish.

I go here a few times a month and never get tired of it. Try the Chesapeake Pizza with crab- it's delicious. Nachos and burgers are spot on. DFH beers are also quality, and their beer app is usually updated so you can see what's on tap!