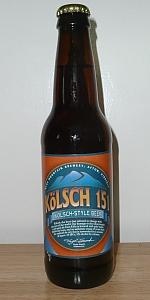 Rated by Peko from Virginia

Reviewed by Navanation from Pennsylvania

Blue Mountain, it turns out, just bought another brewer (South Street in Charlottesville) that I had at that same bar.
Blue Mountain started 11 years ago in an ex-urban area, so it is good that it saved and can continue to spread the gospel of craft beer. Another Mom 'n Pop shop (with close friends) makes a go of it with diligence and passion.

3.33/5  rDev -7.8%
look: 4.25 | smell: 3 | taste: 3 | feel: 4.5 | overall: 3.5
Clear straw, not much white head, but it sticks around, and leaves nice lace
Smells like pils malt
Bready, a touch fruity. Not really much going on beyond that
Light bodied and refreshing.
I'm guessing that this became a mainstay after selling well in the brewpub. Folks coming in there just got finished hiking, and needed a light, refreshing beer. Would be damned good in the summer, not sure why it was included in the winter mixed pack.

Reviewed by 88caprice from Virginia

Good overall for the style.

Light golden color. Fizzy soda-like head that dissipated. Smell is quite vineous. White grapes and a little winey. Taste is grassy with a hop zing and a winey quality. Minimal malt finish. Medium bodied and sparkly.

Taste - Typical Kolsch nice salty flavor along with lemon and a good amount of biscuit. Getting a good but of malts on the back end as well.

Overall - A well done Kolsch true to the style.

Oddly, I smell fried eggs as the dominant note. There are also a variety of malted and raw pale grain smells as well.

While the nose had no hop, the taste certainly features some bitterness. The paler malts stand out until the swallow when a melange of pepper bitterness comes through. The aftertaste fades but lingers. Full bodied for the style with moderate carbonation.

4/5  rDev +10.8%
look: 4 | smell: 4 | taste: 4 | feel: 4 | overall: 4
I give this 4s across the board for being an all around solid and enjoyable beer. Poured from a can into a pint glass, light golden yellow appearance with nice carbonation bubbles. Smells of sweet malts and light grassy hops. Tastes the same. Very crisp and light and refreshing. A lovely take on the style.
Jul 02, 2016
Rated: 3.28 by BrewskiBuds from Virginia

Reviewed by Pantalones from Virginia

Poured pale yellow, settling into a darker golden color in the glass. Perfectly clear, shiny, lots of rising bubbles -- this is a nice-looking beer! Little bit of white foam on top at first, which shrinks away into a thin coating on top pretty quickly but doesn't totally vanish. Left a few stray trails behind on the sides of the glass as I drank.

Smell is initially pretty nice -- lots of grassy hops right away, with a bit of a malt sweetness (almost caramel-y) hiding behind them. Strangely, around halfway through the glass the smell started to remind me very much of chicken broth... not sure why that would be. Not an entirely unpleasant smell even after that shift happens, but definitely a bit odd.

Flavor starts with a slightly-sweet, crackery malt... and then loads of grassy hops come in, much like in the smell. A bit of spiciness from the hops comes in on the end, too. Maybe a tad milder than the Sierra Nevada Kolsch I had this summer, but similar flavors overall and they blended together and worked very nicely together.

Nice mouthfeel too -- soft and bubbly, no harsh or prickly carbonation despite the massive amount of bubbles rising up through the glass at all times. Light and incredibly drinkable without ever feeling watery. I found myself taking pretty big gulps of this even when I was trying to slow things down a little -- not a "sipping" beer for sure. I could probably drink a quarter or a third of a glass without stopping, and I'm someone who doesn't generally chug down beers quickly.

Overall, while I think I liked Sierra Nevada's Kolsch more, this one was also a very good beer, and has the advantage of being available year-round in six-packs rather than only in a summer variety pack. I predict that I will definitely be buying more of this one in the future.

Rated by beerrat from Virginia

3.67/5  rDev +1.7%
look: 4 | smell: 3.75 | taste: 3.5 | feel: 3.75 | overall: 3.75
Poured from a can into a shaker pint, the beer is a crystal clear, straw yellow coloring, with a solid flow of carbonation throughout the body, and a filmy, white halo of head. Aromas of toasted grains, floral highlights, subtle grassy notes, and an earthy highlight. Flavors are toasted grains and subtle honey forward, with grassy and peppery hops in the backbone, some corn and cracker notes, and hints of char. Pretty roasted tones, overall, even into the slightly bitter and floral aftertaste. The body is smooth, with a crisp undercut from the carbonation. Smooth, crisp, clean finish, with a subtle bitter linger. Very refreshing.
Jul 23, 2015
Kölsch 151 from Blue Mountain Brewery
Beer rating: 82 out of 100 with 242 ratings