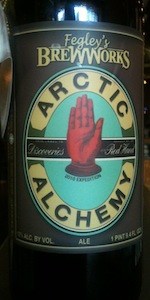 Reviewed by Mllrg973 from Pennsylvania

5/5  rDev +24.7%
look: 5 | smell: 5 | taste: 5 | feel: 5 | overall: 5
I was away for the weekend. Initially intended to go to Funk Brewing in Emmaus, PA, but lack of nearby hotels sent me to Bethlehem, PA. Driving down the street, I went past Fegleys and decided to head in there once I got my hotel situated. I parked my car and headed into the hotel. I got a room while I was having my first drink at the hotel. When I got to Fegleys, I noticed the huge selection of beers there. Some I tried were only $3 for a 5 oz sample. The bartender told me they were out of Arctic Alchemy. But, after having a few beers, I noticed the bottle of Arctic Alchemy with the other beers. I said something to the bartender, he put one on ice while I debated whether or not to get the huge bottle. After a few other beers, I decided, yes, I'm going to do it!!! About to change the game!!! I tried it and I could taste a cherry undertone to the beer, not so much of booze though. I was able to finish the beer and still able to walk after doing so LOL!!! I thought I would be on my ass!!!
Aug 06, 2018
Rated: 4.17 by madelf66 from Pennsylvania

Rated by BuddyPal from Pennsylvania

overall - not bad, sort of like a poor man's JW Lees

The taste is delightfully malty, sweet, and mellow with aging.

Dec 29, 2013
Rated: 4 by DarkLordPsycho from Pennsylvania

O - Alot of alcohol from start to finish with warming in the back of the throat on the way down, not a shy beer by any means. For grins, would be interesting if the ABV was dialed back and this gets aged in a bourbon barrel.

3.63/5  rDev -9.5%
look: 3.75 | smell: 3.75 | taste: 3.5 | feel: 3.5 | overall: 3.75
Appearance is a muddy brown with a copper hue. There is a finger of head that dissipates quickly leaving only a faint trace of lacing on the sides of the glass. The nose is sweet like the scent of raw cane sugar. The taste is sweet as well - too sweet. The caramel notes are nice, but the whole offering is just too syrupy. The only thing that breaks up the syrupy sweetness is a hint of dryness from the hops on the finish.

This one is a sipper for sure and not because of the alcohol (which is fairly well hidden). The sweetness was just a wee bit too much to handle.

My sense is that age would do justice to this offering. I thought about purchasing a 25oz bomber, but the $20 price tag was just too much for me to justify on an experiment.