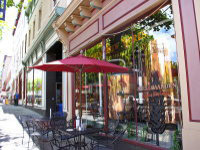 The place is really long and has seating for a lot of people. The bar was a horseshoe with mini sides, but it could sit quite a few. I believe there were 10 people at the bar and everyone had a seat or two between them.

I was greeted and asked if I wanted a menu as I sat down. I declined to both, as I had already done the research on which beer I wanted to try. I opted for an Aggressive which was labeled as a West Coast IPA. They had about eight other brews on tap ranging from their four flagship to a regular version and barrel aged version of Insidious to an East Coast IPA and finally a Belgian Style Brown Ale. So the selection variety was nice and they didn't have to overdo it. The Aggressive was nice and hoppy and towards the bottom it became caramely and hoppy.

As for the service, like I said, I was greeted upon sitting down and not bothered with until my glass was empty. To one his own. I'd like to try the food when I return, or at least look at a menu.

Make sure to bring quarters or at least some dollar bills for change as there are meters and parking garages.

First of all this brewery was located in a beautiful town of Allentown, PA. Really beautiful ambiance inside this brewery. They had two floors with seating on each floor and their brewing vats were huge. The quality of their beers was solid all beers were decent and they had about 18 beers on tap all of their own. Their beer selection included stouts, porter, gose, West Coast IPA, Hefeweizen, Wit, Lager, and a Pilsner. The waitress (Emily) was very friendly and knowledgeable. Their Pilsner was amazing and probably the best Pilsner I've ever tried, even better than Industrial Arts Metric. We all got sandwiches and/or burgers and they were excellent! Overall solid place with great food, chill and laid back vibe, and decent beers with room for improvement.

Really nice brewery, the service when we went was pretty bad, had to wait over a half hour to get served. The food is average as are their beers. most likly would not go back.

Ordered food but none came

Worth the stop if you ever find yourself in Bethlehem.

Visited Brew Works in Bethlehem on a Saturday night. Waited almost an hour but we had a table of ten(wait was to be expected)...Many of us ordered the flight sampler of 6 beers which was very good. Appetizers were pretty much bar food except the Boom Boom shrimp(very good)...I had the Slag Pot meatloaf which was excellent, Fish Tacos were also very good....Service was excellent and we really had a great night