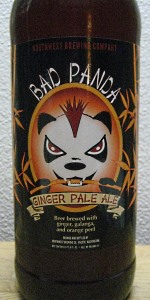 22oz bottle, from the beer aisle at the Yoke's across the street from my hotel in Ponderay, Idaho, a few weeks ago.

This beer pours a clear, medium copper amber colour, with two fingers of puffy, foamy, and somewhat creamy off-white head, which leaves some melting iceberg lace around the glass as it gently subsides.

It smells of crisp, zesty ginger root, bready pale and caramel malt, fleshy orange, and faint earthy, weedy hop bitters. The taste is much less gingery than the aroma promised, as the root character comes through much more readily than the spice, with a sturdy grainy maltiness, some middling orange pithiness, and a mild earthy bitterness, that is hard to discern as being hop or guest ingredient oriented.

The carbonation is fairly peppy in its broadly-rendered frothiness, the body on the lee side of middleweight, and more or less smooth, neither the ginger nor any other attendant bitterness capable of messing around here. It finishes trending dry, the grainy and faintly biscuity malt trailing off, while an echo of the sassy ginger that was reverberates in the distance.

Not a bad ginger beer, the initial headiness of the spice drawing you in, and then stepping back to let the simple base ale take us along for the rest of that merry ride. Yeah, the ginger never really leaves this offering, but it does well to not be overbearing or overstaying, which I have to say I kind of appreciate.

Poured from 22oz bomber into a pint glass. The label calls this a ginger pale ale, brewed with ginger, galangal and orange peel.

Appearance: rich orange hue with no haze and a strong effervescence. Head is a finger of frothy tan foam which dissipates pretty quickly. Color is quite lovely, though.

Smell: lightly malty pale-ale aroma through which the ginger and orange shine quite well. The spicing seems to have been done with an even hand; this is about as well as I've seen ginger handled in a beer.

Taste: malty and a little bit on the biscuity side; bitterness is low. The ginger is present in the flavor, although it's in the aroma where it really shines. Still, a pretty good beer for what it is.

Mouthfeel: medium body with a well-integrated carbonation and a decent creaminess for the style.

Overall: this is a surprisingly subtle and even-handed beer. I'm quite impressed; it's nice and drinkable too. Kudos!

Pours a clear amber in the tall glass. Adequate foam and plenty of carbonation in the mouth. The aroma is gingery spice, with more in the nose.

The ginger is not overly powerful, but it's the only real flavor in this stuff. There is a little malty body and It's just slightly sweet. The mouthfeel is faintly acidic, and eventually there is a bitterish aftertaste. It's really not bad for a flavored beer, but only is you really like ginger. More hot than bitter.

From the 22 oz bottle purchased at Special Brews in Lynnwood, Washington.

Taste: Very earthy and peppery at first. Ginger is in there, but isn't over powering. Gets sweet and malty soon after. Dries out some and faddes with the herbal and ginger aftertaste.

Feel: Medium body. Less carbonation and a bit flat after a few minutes.

Overall: Tasty. Good as not too strong on the Ginger like some other Ginger Brews that I have had.

This beer pour a rich reddish gold color. The nose is dominated by fresh ginger, but this fades as it warms up. The taste is very faint. I don't get much spice here, but I do not get much hop flavor either. Overall, this was pretty bland. I am always excited about the potential of ginger in beer, but this was not well executed.

Love the ginger taste. It's a good light beer for summer