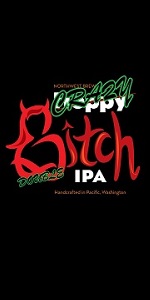 Poured from 22oz Bomber into nonic pint glass,Appearance is Hazy Apricot with plenty of carbonation,3 fingers pillowy head,nose is mango,lemon zest-and pine,taste is just what I'm looking for,powdery dry and All Hops,little to no malt profile and not heavy at 7.5 ABV for a Dipa...EXCELLENT!! Just what a West Coast Hop Bomb Should be...forget the balance Hop heads demand a lupulin Bomb...and this one Delivers! Best readily available Dipa Hop bomb on the planet....great Job Northwest Brewing,...CHEERS!

A — Pours a light and clear yellow color, there almost appears to be a tinge of green around the edges as well. Thin white colored head doesn't leave behind the greatest lacing ever, but not bad.

M — Quite astringent and dry, no real lingering sweetness.

O — OK overall, would actually like to see the ABV a bit higher to bring up some character.

This beer delivers on its stated aim to deliver a huge hop bomb. Bitterness and aroma dominate yet there is a nice, subtle balance brought to play with the grain bill. A must try for hop junkies...

Look: Pours a beautifully clear red amber, one finger plus of pale gold head, that settles to a ring. Pretty pretty.

Smell: Aroma has some interesting spice notes, and a grassy/vegetal thing that doesn't always work for me, and isn't here.

Taste: Not balanced typical for the style, huge bitter hop bomb with scant malt flavor. I like big hop brews, so this personally scores well with moi.

Feel: Generally bright and refreshing. Lighter than I expect for the style. No alcohol heat here

Overall: Nice tasty hop bomb. A little on the light side in malt, abv, and body for the style, but the hop-riot makes up for that. Not a big "aroma" beer, odd given the giant hop assault in the flavor department. It's generally not what I'm looking for in a DIPA, but it is a ridiculously hoppy thing somewhere between a pale al;e and a barley wine, and I like that. I've dated crazy bitches before, this one I'll be seen with again...

I'll preface this by stating I'm not a DIPA/IIPA fan but I'm always willing to explore and see if I may find one that changes my mind. To be fair to the beer, I don't feel rating it anything less than 4 on taste would be appropriate considering this isn't one of my fav styles.

However, I do love the smell of a strong-hopped beer and this one didn't disappoint at all! Loved the piney, citrusy aromas that lingered until the last drop. Appearance and mouthfeel were nice as well. I'd think that if you were a DIPA connoisseur, you'd probably think this was a pretty decent option.

I've had this fine IPA a few times. The first time was on tap at the brewery. I liked it enough to get a growler the following week.

A great looking beer, white head, midas golden brown. Hoppy bitterness, with bitter sweet after. Not too heavy, like some double/triples....having seconds is no problem.

Served in a tulip, and than a Big Kahuna glass from Kona. Picked up at 99 Bottles in federal way, WA. This is a high volume IPA without sacrificing the taste. Loved the beer. Great hop coverage without being overbearing. Wonderful choice for lovers of a high ABV and IPA.

Northwest Brewing Co.- Crazy Bitch IIPA: not too bad, kinda like a nicer version of PtE.

Pours a hazy golden flax, a dutiful head of white holds on till it cannot anymore. Floral citrus aroma, crisp dry citrus palate, notes of honey and lime. Mouthfeel is crisp and unhindered, carbonation is medium-light, doesn't let the hop bitterness to linger on the back of the tongue (which is a plus for me). Overall a damn good drinking IIPA.

Smell is kind of floral but mostly dominated by citrus hops. Some grass like fresh hops too. Malt and Yeast don't really come through.

Golden and clear and poured with a nice thick white head. The head stays as a nice thin layer and leaves only a little lacing.

Super bitter. Lots and lots of Grapefruit hops. Bitter at the start, bitter on the finish, bitter citrus peel lingers in the aftertaste. In that way, its pretty one dimensional. Lots of bitterness, not much hop flavor, very little malt or yeast in there. It's a hop-bomb. It seems really clean fermentation with a ton of hops. Edit: in the last third of the glass when it warms up it's got a big pine hop flavor.

Given that the girl behind the bar said it's a dIPA but didn't know the ABV, it seem pretty thin for the style. It has the body of a regular pale or IPA. There's not noticeable alcohol strength either.

It's lacking something. Maybe more malt flavor would make it more interesting or more in the tun would bring up the body? Honestly though, it's one of their better beers.


Crazy Bitch from Northwest Brewing Company
Beer rating: 90 out of 100 with 40 ratings