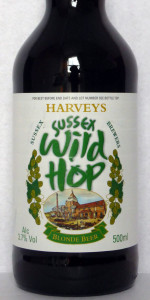 A gift from a friend who visited Lewis for work. 500ml bottle. Pours a clear amber colour with a off white head that disperses quickly. Aromas of hop & grain. Tastes of grass, bread as well as hop and grain leading to a mild bitter finish. Overall I was expecting much more having tasted other beers from this brewery.

Boring, watery, trad bitter. Lots of stewed hops and caramel sweetener. Smells of nothing. Has zero mouthfeel. Really disappointing. Not my thing. Might be better on cask.

A 500ml bottle with a BB of Aug 2015. Acquired recently from the brewery shop in Lewes. The label states that it is brewed with the 'Sussex hop', a wild hop discovered and now cultivated commercially, in addition to Cascade.

A: Poured into a tulip pint glass. A clear golden hue with some faint floating sediment and medium carbonation. Yields a large head of frothy white foam that lasts for a minute or two before disappearing.

S: Aroma of cooked grain with a slightly sweet, fruity character. Faint hints of stewed leaves and a subtle vinous quality. Little hop character to be discerned. Not very impressive.

M: Mouthfeel is light and tingly, with soft carbonation and a thin, watery body. Slightly astringent, accompanied by an aftertaste of cooked grain, stewed leaves and acrid cardboard.

O: Spectacularly poor - certainly doesn't meet expectations. Average looks, while the aroma and flavour are weak and vaguely unpleasant. Virtually no hop character and a faint vinous quality lurks alongside some harsh notes. Watery body. A perfect example of so-called 'dishwater' produced by traditional breweries. Perhaps there's something wrong with this bottle but I would hesitate to endorse this beer.

Sussex Wild Hop from Harvey's Brewery
Beer rating: 2.94 out of 5 with 4 ratings