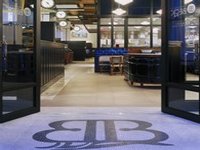 View: Place Reviews
Reviews: 43 | Ratings: 60 | Log in to view all ratings and sort
Reviews by msubulldog25:

My wife and I love the beers and cuisine of Belgium; as great fortune would have it, the hotel we chose (Henley Park) is just around the corner from Brasserie Beck. A final-night-in-town there was a given.

Located in the ground floor of a chic glass and marble monolith at the corner of 11th and K, Beck was one of very few downtown spots that had outdoor seating. The generous sidewalks on K allow for a couple dozen tables (smoking allowed, so beware if you're averse), sheltered by umbrellas. A small mobile bar (7 taps) was stationed against a far wall. At 7pm, with skies a bit overcast, we stayed indoors and were placed in a nook next to the curtained windows. The spot was terrific, quiet enough despite a proximity to the glass-walled kitchen - spoiled only slightly by a couple of loud-mouthed, cell phone-gabbing patrons at an adjacent table...GRRR! Ceilings are lofty, colors are muted, floors are marble and tile, wood trim is dark...it all works with a classy ambiance that's not overly stuffy.

Food, beer, and wine lists were passed out as we were seated; we passed back the wine list immediately (despite an impressive glass-encased 'cellar' on display, we were there for food and beer only). Choosing from among the 11 indoor taps, we settled for a Gouden Carolus Tripel and a Barbãr Bok (one I'd never tried before). Both were very good, served in the right glassware at the right temperature. A wonderfully summer-y salad of ripe heirloom tomatoes, mixed greens and shaved cheeses arrived soon after. Next, a second course of beer (bottled Petrus Dubbel, Gulden Draak on draught) appeared with a pot of steaming traditional (white wine and garlic) moules a frites - a couple dozen plump mussels with perfect fries and 3 sauces (classic mayo, paprika, yellow curry). Another server noted our bread supply was low, so a piping hot loaf was delivered in a flash. A final course and yet more beer (Kasteel Donker and draught St. Bernardus 12!) descended from the heavens: a succulent beef carbonnade on parsnip puree for me, fall-off-the-bone lamb shank with white beans for my wife. A dessert menu was presented, but Wow, just wow. Wonderful meal, terrific beers...still feeling full more than 48 hours later!

Max was our server: quite friendly, attentive without pestering, knowledgeable about the beers (though admitting to not knowing every one in the 18 tap/90+ bottle list - fair enough). That beer list seems to be pretty well set, though there's some tap rotation; bottles are nicely arranged by style, with only a dozen or so non-Belgians (they are a nice assortment of German, French, Canadian and US brews, with a couple Dogfish Head featured specials - Black & Blue and World Wide Stout).

Prices are on the high side across the board: draughts generally $8 or more, bottles at least $10 (with some aged examples, lambics and strong ales ranging from the $30s on up past $60/bottle). Appetizers and early courses are typically $10 or more and entrees are well above $20...so expect a sizable bill at the end of the night. Meh, it's Downtown DC and those three hours spent dining rank among the finest we've had in years. Come with a full wallet and an empty stomach and you'll go home very happy!

PS A trip to the bathroom (leading past an odd confluence of humanity, from well-heeled jacket-and-tie locals to flip-flop and T-shirt sporting tourists) is worthwhile. In the men's room, checkout the black & white wallpaper, a criss-crossing of sexily-stockinged legs, bras and panties!

What I had: Boulevard Tank 7 Farmhouse Ale on tap, can of DC Brau The Corruption IPA, bottle of Stillwater Cellar Door, Seared Spiced Tuna for me, Belgian Endive Salad to split, pasta entrée special and a few glasses of sauvignon blanc for my fiancé.
What I liked: Swanky upscale atmosphere, plenty of seating available, love the wino artwork above the bar, excellent and well-presented food, very good bottle list, great spot for a date night or just to hang out at the bar.
What I disliked: Waiter initially brought me the Stateside Saison when I ordered the Cellar Door and didn’t offer to rectify the mistake until I pushed it, like most places in D.C. the prices are fairly high.
Would I go back? Yes.
Overall Rating: 80

Went on a slow Sunday night. Only 12 Belgian drafts is a bit limiting and about half of them Belgian standards. Still no issue finding something to drink. High ceilings and beautiful interior. Extremely warm service. Excellent food. Had the steak tartar which was top notch and the Croque Madame that was herbed wonderfully.

An upscale restaurant with a good selection of Belgian beers. The food was good but pricey, as was the beer selection on tap. Never-the-less I am glad I visited.

I'm not sure why this establishment has such stellar reviews. I can appreciate a small and carefully crafted tap list, but this place falls flat. If one of the handful of beers they have on draft looks enticing, you might have a hard time getting a bartender to notice you, even if the place is empty. That's ok, you can take in the ambiance of the place while you wait; the old mirrors and clocks are beautiful. However, watch your butt. Literally. The seats are made from a pretty, weaved blue and white plastic that (on several stools) were coming undone and poking patrons in the rear or snagging their clothes. I'll walk a couple blocks to Maddy's the next time I'm in the area and save my behind AND my wallet.

Monteiro from District of Columbia

While you'll pay a lot, the quality of what you get served can't be beat if you're looking for good Belgian beers. Their Happy Hour specials sometimes contain some real gems, but if you're looking for the best variety, look in their book of beers. The bartenders are generous in letting you sample what's on tap and very knowledgeable about all the options. Take advantage and describe what you like and you're sure to be provided a great beer in the right glass-ware.

9/1/17 - Visited many times since this original review. Sit at the bar for the best service. They have a certified cicerone on staff, so ask for him if you need help. The mussels are great, try the red spicy thai version. Reduced the vibe from 4.75 to 4.5.
-----
Visited on a Thursday afternoon, after the lunch rush before dinner, the week before Christmas. Only spent time at the bar. A very polished clientle.

Food - I did not sample the food on this visit, but from past visits BB has a very tasty menu, albeit one that can fill you up quickly. What I might consider high quality, but typical brasserie food.

Beer - An excellent selection almost exclusively focused on Belgian beers, both on tap and by the bottle. I did find a Goose Island Bourbon County Brand Stout, which I ordered since I had never had one before.

The bartender, a young lady in her twentys was very knowledgable. She indicated that she was studying to be a cicerone. It was a pleasure talking beer and an opportunity to learn which I did not pass up. If only all my bartenders were this friendly and knowledgable.

Thursday afternoon also happen to be that time when one of the distributors made his visit to show his new wears. Staff kindly invited me to sit in as the distributor showed off about eight new beers. I was asked my opinion and I gave it. What a wonderful treat!

Very pleased with the BB. It is a regular stop for me when I need a good beer.

I've been here about a dozen times in the past two years and ALWAYS make a visit here on a trip to DC.

This looks and feels like an upscale Brussels brasserie. The food is great, and it is always entertaining to watch the entire kitchen prepare the food in the open. There is a large bar area, with usually about 10 draft beers. They alternate between commercial (Palm) and artisinal (Alvinne), I go for the latter. They have a daily happy hour from 5-7 with half-price beers. Not to be missed.

Great mussels in a bunch of different varieties and superb twice-cooked frites. Good choices of fresh oysters in season, with the seafood chef working right at the bar in full view. Entrees are delicious. I used to come for the rabbit cooked with kriek, but that has unfortunately dissapeared from the menu.

Draft beer choice is limited, but they always have some good beers that are available for happy hour. Some of the draft beers get pricy, such as St. Feuillien blond at $11--you can see how happy hour matters.

Extensive beer menu with bottles to satisfy many a beer connaisseur. Very pricy with a wine markup. A bomber of Stillwater Stateside saison will put you back $27. Lambic choices are rather pedestrian, with St. Louis, Giradin, and Oud Beersel being the only entries. C'mon, get some 3 Fonteinen and Cantillon in there.

Brasserie Beck in Washington, DC
Place rating: 4.42 out of 5 with 60 ratings