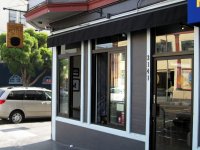 4.8/5  rDev +9.6%
vibe: 4 | quality: 5 | service: 5 | selection: 5 | food: 4
I'm not a claustrophobic person but I do get the "this place is kinda small" feeling everytime I walk into The Monk's Kettle. Not sure if it's the guy at the door in charge of admission, the entryway, being immediately greeted by the end of the bar, or the lack of seating space. Like some other reviewers, I do wish this place were bigger.

The quality of beers you'll find here is first-rate. You won't find a single macro adjunct lager in the entire bunch.

Bartenders here are very knowledgeable, taking the same approach to beers that a sommelier would with wine. They're adept at recommending beers based off your tastes and palette, are attentive to your needs (empty glasses) and are good at remembering repeat customers.

The bottle selection is immense and well documented. Menus classify beers by style and you'll be hard pressed to find any beer style that isn't well-represented. For special occasions, they've even got a special menu of harder to get, small issue batches.

Though I've not been blown away by the small sampling of food I've had, I think more menu exploration would gain me a larger appreciation of their culinary treats.

Beers here are $1-$3 more than you'll find them around the city but I've never regretted paying a little extra for an hour or two at Monk's Kettle.

Reviewed by jophish17 from Georgia

Reviewed by RobJDay from Massachusetts

3.48/5  rDev -20.5%
vibe: 1.5 | quality: 4 | service: 4 | selection: 3.25
I will grant that this is a place with plenty of interesting beers that seem to be chosen more for weirdness and rarity, which will please many. For those who pursue the top 500 list, you can get a nip of Fantome Saison, Sucaba, and Abyss if you're willing to pay the price. I objected to the $8.75 pirce for the 10 oz American Pale ale from Santa Cruz, but you can get a whole pint of Firestone DBA for the same price, so you can say it's just San Francisco.

The other nice thing is the wall of glassware between the tall carved back bar endpieces. But the noise is so deafening with people yelling over the sound system. It's so cramped and uncomfortable, no matter how good it looks, I drink my one beer and get out. The food is also lovely and they seemed to be selling a lot of the $17 burgers. The fried chicken wins the beauty award. You can see the food menu as well as current beers online, which is also a plus if you're looking for a reason to visit on any given day. But go when it's warm enough to sit at the few sidewalk tables-- though the time I noticed empty seats was a damp, chilly evening.

Reviewed by frasergrove from California

Reviewed by amano_h from Oregon

Where to even begin. The food at Monk's Kettle is out of this world; I've never once been disappointed with their Monk's Daily Sandwich, and the charcuterie board is a home run if you're just stopping by for a few casual drinks late in the afternoon. If you end up staying for dinner, like I usually end up doing once I see the lines forming outside, their trout is a delightful combination of juicy and chewy (two adjectives I don't commonly associate together with fish), and I double dog dare anyone to NOT fall in love with their duck confit. It's impossible, I swear.

The beers. By now everyone has that one friend who is absolutely bonkers about craft beer. When I say absolutely bonkers, I mean that this one friend is the one that drives four-five hours to a different state for bottle releases, will look his nose down at you for drinking an IPA out of a nonic pint glass, and publicly shame anyone who thinks Blue Moon is a "craft beer." Monk's Kettle is kind of like that annoying friend, except he has an ulterior motive to be nice to you in that he wants your money. So imagine that the one beard-toting, hop-sniffing, pot-belly-having, brewery t-shirt wearing friend suddenly had some sort of a lightning epiphany and decided he wanted to share all of his prized possessions with you (in exchange for money) and you pretty much have the Monk's Kettle.

For those of you that speak beer, the Monk's Kettle is one of two places that I can count on to carry Russian River Brewing Company's Pliny the Elder on tap at any given day of the year. They also have around 25+ taps of beer, primarily from CA (Cellarmaker and Firestone Walker being the usual suspects) with some other choice curations from around the US and Europe. They also have an extensive, yet somehow rotating bottle list as well which includes a vintage ($$$) sour/stout selection; a very curious selection of hard-to-find (albeit grossly marked up) Belgian beers with the likes of De Dolle Brouwers, Brasserie De la Senne, and Oud Beersel; and for extra brownie points, they also serve the original Leipziger Gose here as well.

If by some chance you're that one absolutely bonkers guy and are still sporting a resting meh face even after reading the above paragraph, Monk's Kettle is also a long-time participant of Pliny the Younger Day (February); on top of that they regularly have themed tap events, like hosting a vertical of all the years and variants of Deschutes' the Abyss, for example.

My advice for any beer-oriented guy or gal looking for a good time in the Mission District would be to shut up and let Monk's Kettle take your money.

Reviewed by tshanahan from California

Reviewed by Motchy from Australia

We left and didn't have a beer that time, though I came earlier in the day and the waiting staff were terrible as we'd only ordered a pretzel so that we could sit outside, it was a bit absurd.

Such an odd place, good beer selection but god awful people you'll have to deal with. You can do better for the area

Rated by HookemHoos from Virginia

Reviewed by Jackolope from California

2.08/5  rDev -52.5%
vibe: 3 | quality: 1 | service: 1 | selection: 4 | food: 2.25
If you like being talked down to and unparalleled levels of pretension than go to this place. If you enjoy sharing beer with friends AVOID THIS PLACE like the plague. Me and my friend were basically asked to leave because our friend wanted to join us for a beer after we had finished our mediocre food. He came at the end of our meal and sat down next to us, I gave him a sip of my beer and that was enough for the host to come over and explain, "We don't just let people come in here and eat and drink..." It was so absurd I couldn't tell if he was being serious until he made it clear that he wanted us to finish up and leave. Why? I'm still guessing. Mind you it was a Tuesday at 9pm and there were a handful of open tables. When I called management the next day to see if this was some kind of joke my concerns were not taken seriously. If you are in SF there are literally dozens of establishments within walking distance that have comparable selections and MUCH Friendlier service. Hell I'd even say Zeitgeist has friendlier service and they essentially pride themselves on being gruff...
Apr 14, 2015

Reviewed by Rilesmiles from Wisconsin

4.44/5  rDev +1.4%
vibe: 4.5 | quality: 4.25 | service: 4.75 | selection: 4.5 | food: 4
Small place, but cozy. Had heard great things about the tap list but was sort of underwhelmed. Was looking forward to trying west coasters that I can't get in Wisconsin but found that the list wasn't very west coast-centric, which is fine. I suppose my expectations set me up for it, but I didn't see much that I can't find at the good places in Madison and Milwaukee. I did enjoy a Salvation, among others, but didn't see the whales that others speak of seeing on the menu.

Food was good but nothing special. I would order something other than the relatively basic chicken sandwich I ordered.

Reviewed by JamLand from District of Columbia

Reviewed by erha2 from New York

4.65/5  rDev +6.2%
vibe: 4.5 | quality: 4.75 | service: 4.75 | selection: 4.75 | food: 4
Super friendly staff. I guess it helps when you bring over some Heady and Sip of Sunshine from the East Coast. No, they were great before I even offered those beers. Tap list still had most of the sours available from their SF Beer Week sour event the day before. Only remember a vintage Lost Abbey Framboise de Amorosa being unavailable the day after. Got to try a lot of Rare Barrel offerings along with Cellarmaker/Sante Adairius I see a Dankness.
Feb 12, 2015
Rated: 4.33 by Fogindex from California

Reviewed by jimh67 from Georgia