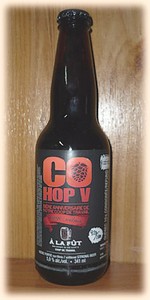 Appearance. Pours a hazy pink-peach colour with a finger of thick off-white head that leaves some great bands of lace.

Overall. I love this style and this beer was a real treat. Pretty expensive at almost $10 for the 341ml bottle, but well worth trying if you like a good Flanders Red.

Thanks to Rutager for generously giving me this one. I just hope he doesn't expect anything too hugein return for his generosity. Bottle 943/1500.

S: Smells like a Flanders Red Ale alright. Sour funk and some yeast.

M: Medium viscosity and a medium to high level of medium carbonation.

O: Very easy drinking and very tasty. Not nearly as sour as it smelled, but the oak and cherry flavours were extremely nice.

750ml bottle served about 10 minutes after pulling from the fridge into a Gouden Carolus chalice. LCBO purchase for $18.25 CDN. This appears to be the same beer, Co Hop V doesn't appear on the label and the ABV is 5.4% on this bottle, but everything else matches up.

Appearance - Hazy ruddy medium brown with red highlights. A thin finger of light tan head is poured and fizzles off in seconds.

Taste - Initially sour and tart, balsamic, sour cherries, possible a rhubarb like element with some grape mixed in. Then it goes woody with oak aging on full display. It finishes sweeter than I would of thought with cherries returning as if they've been sprinkled in icing sugar, there's a palpable near chalky flavor with that that furthers that illusion. Complex and pretty tasty. Overall flavors not as intense as expected, very dialled back.

Mouthfeel - Dry through and through, modest carbonation, body is medium-thin and finishes with some prickly sensations on the tongue but not quite as full blown in that respect as other Flanders Red Ales.

Overall - A tasty take on a Flanders Red Ale, with cherry elements abounding, but the aging to me has just taken alot out of the flavor. It's nice and quite smooth, but possibly too smooth for its own good. Would enjoy again, but not at this price.

A Kriek/Flanders Red hybrid that was my favorite at the VT Brewers Fest this year. Not overly tart, but the cherries shine through perfectly with the wood. There's a slight brett-like mustiness that I loved.

Dark red, beige foam, beautful and elegant.
Elegant smell, between cherries, acetic, wood notes and a light vinous hint. Some vaniglia.
A taste and, bang, Belgium!
Very good taste, where the sweet and tart notes of the cherries are perfectly blendend with the acetic and woody notes.
Some fruity raspberry, warm note. The acicid sourness is perfectly dosed.
Long and persistent aftertaste, acetic and fruity.
Great beer.

Bottle: Poured a reddish color ale with a medium size light pink head with average retention and light lacing. Aroma consists of tart notes with some oak and sour cherries flavour. Taste is also a mix between some oak with some tart notes and some light sour cherries notes also noticeable. The acidic notes are very much subdued which makes this beer very drinkable. Body is about average with good carbonation and no apparent alcohol. Maybe a tad overpriced but I would probably buy again nonetheless.

Beautiful red with a hint of pink in the head, nice ring of retention leaves a lace.

Aroma of cherries with an underlying barnyard funk.

Light residual sweetness balanced with tartness and a drying finish.

Appearance: Body is a dark rosé color with about 2-3 fingers of good sheeting. The head is pinkish a bit.

Mouthfeel: Low carbonation but feels fizzy a bit and acidic as well.

Overall: I found it lacking and too mellow for the style. There are better options that are less expensive than this one.

A - Pours a cloudy deep grapefruit colour. Like a dark blood orange or something, with a light hint of amber. Strong carbonation coming up to what has settled out as a one finger very light pink head. Good half finger of retention and spotty lace.

T - Sweet up front with a kool aid type fruitiness, some sharp tartness with lemon candies too. Good sweet/tart combo. Sweet fruitiness in the finish akin to watermelon maybe. A bit of raspberry. This beer has a good combo of sweet berry flavours and a tartness that gets much milder further along.

M - Strong carbonation, lighter than usual body, and a dryness and some tartness to finish.

O/D - A pretty good Flemmish style. Could use more woodiness and tartness, but otherwise it was quite drinkable. Enjoyed it.