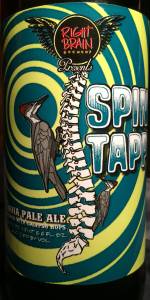 A: Light yellow amber in color with a large fluffy white head.. swirls of yeast drift through like storm clouds, and a few chunks of yeast fall to the bottom.

S: Light lemon and herbal with some malt sweetness. It's almost very lager like in aroma.

T: Flavor follows.. lightly lemon flavor, with a but of an herbal kick, light straw and malt flavor with some earthy bitterness.

M: Medium light in body, with moderate carbonation, and a long bitter cling.

Poured from bottle to pint glass. Copper in color with a finger of foam atop. Aromas of cirtus and pine, some sweet malt. Flavor is bitter pine upfront, with a big malty punch in the middle followed by a citrusy finish.

This beer is a sharp and dry-tasting IPA that feels pretty well balanced. I smell orange peel and grapefruit, and some pine. It tastes as it smells, with medium carbonation.

T - Strong bitter open, resin and pine, a dinner roll hint from the malt core, and a dry and sharp finish.

M - Prickly carbonation, a bit of resin builds from the close.

O - This is a hop-forward IPA, heavy on the bitterness. Decent but pretty one note.

Short Review. This was a good IPA, the hop profile was nice, it wasn't overly bitter and it didn't have any off flavors or aromas. I would drink it again.

We split a bomber, pouring a brew of glowing sunset orange into our Great Lakes pints. It robustly throws a three finger head of tightly aggregated beige foam, showing long retention. This eventually collapses on itself, leaving crags and craters where it once stood, with speckled, patterned lacing etched around the glass. A thick haze cuts clarity, but no sediment is noted. Carbonation appears to be highly active. The nose presents with heavy maltiness of pale, chalky, cereal toastiness, with raw honeycomb, Welch’s grape juice sweetness, plastic phenols, vanilla extract, Graham crackers, slick shoe polish bitters, lemon cleanser, warmed apple crisp, distant herbal and grassy hoppiness, and fresh leathers. With warmth comes a distinct waft of freshly laid paint. Our first impression is that the malt bill is there in full swing, as advertised on the bottle, but also that the bitterness of the hops is surprising, considering their lacking throughout the aroma. As we sip, the taste begins with dense plastic and medicinal phenolic bite, red apple and plum fruitiness, pale and Munich maltiness, chalked bready yeastiness, sesame seeds, paper towels, fresh honey stickiness, sea saltiness, and browned strawberry sweetness. The middle comes with continued phenolic bitterness of plastics and shoe polish, Sharpie marker bite, herbal and lightly citric hop oiliness, parsley, multigrain cereal, metallic pale malts, and toasted oats. The end pops though with beach ball plastics, resinous grassy hoppiness, dried waxiness, sugar-speckled cherry and strawberry flesh, a light sting of booze, revived honey brushes of sweetness, slickly metallic yeast, dried herbal rub, chamomile tea tannins, manila envelope adhesive, and skins of dried lemons. The aftertaste breathes of rubber and Army men, bitter walnut oils, sandpaper, fusel alcohol burn, honey and white sugar sweetness, soft floral and more robust herbal hoppiness, more plastic dominance (who would have guessed?!), dank cherry, sopping wet pale and decent caramel grain sweetness, and ceramic glaze. The body is medium, and the carbonation is high and prickly. Each sip gives nice slurp, smack, cream, froth, foam, and pop, with a certain crispness left to the lips. The mouth is wetted, but quickly dried into a compact pucker across a generous foci near the front of the tongue. This clears to a chalky drag around the mouth. The abv is appropriate, and the beer drinks easily enough.

Overall, the most enjoyable thing about this brew is the appearance. It just comes across so fluffy, warming, and inviting. Between the aroma and the taste, the two heavy hitters, we feel that the latter slightly edges the former. The nose, especially with warmth, has an intense plastic vibe, much like walking into a Foot Locker with a broken air conditioner in August. The hops are thus lost almost entirely. The taste also seems to flop on the hops, with the enhanced malt bill, which was designed to meet and match the bitterness of the hops, taking more of a central role than perhaps intended. Additional sweetness, and out-of-whack blend comes in the form of honey sweetness, mixing oddly with the translated phenols of the aroma. This is not their best hoppy effort, but again, we will always support the local guy, and readily look forward to an improvement with their subsequent rollouts.

Spinal Tapper IPA from Right Brain Brewery
Beer rating: 84 out of 100 with 69 ratings