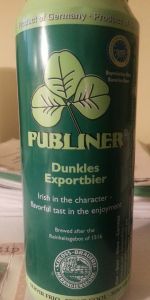 Notes:
View: Beers
Reviews: 16 | Ratings: 62 | Log in to view all ratings and sort
Reviews by chinchill:

500 ml can of Herrnbräu Publiner Dunkles Exportbier with "Irish in the character" on the can. Production date of July 2015 and BB date of Sept. 2016 stamped on the bottom of the can.

Apparently, as the look (clear, dark reddish-brown) and flavor indicate, this is a German made Irish Red Ale. In any case, it very malty and lightly sweet with hints of caramel, vanilla and faint spices. Lots of dark bread flavor.

Poured from a can into a pint glass
Appearance – The beer pours a brick red color with a two finger head of off white foam. The head has a fantastic level of retention, slowly fading over time to leave a ton of foamy lace on the sides of the glass.
Smell – The aroma of the brew is strongest of a roasted malt smell mixed with some cherry and molasses. Along with these stronger aromas comes a little bit of harvest fruit and a touch of yeast.
Taste- The taste begins with a toasted malt, brown bread flavor that has a decent level of a caramel and molasses. There is a touch of nuttiness as well as a little bit of earthy hop, which with the rest take the taste to its end and leave one with a moderately dark and sweet taste to linger on the tongue.
Mouthfeel – The body of the brew is average in thickness and creaminess with a carbonation that is average. For the style and the tastes the moderateness is good and makes for an easy drinking, and flavorful brew overall.
Overall – A rather decent, more “dark” Irish red. Fun to try, but nothing super out of the ordinary.

Sudsy and attractive brown amber in the glass. The first sip reveals the dishwatery sweetness. There is a passing resemblance to watered-down pineapple juice. There seems to be no hint of hops. Do they brew up some Malta sweet non-alcoholic malt beverage, and then top off a cheap lager? If this is an authentic German Dunkles I say to hell with it. From the 500 ml can.

This beer pours a clear, dark red-brick brown colour, with one finger of wanly puffy, and mostly just bubbly beige head, which leaves a bit of melting windshield ice lace around the glass as things slowly sink away.

The carbonation is fairly low-key in its plain and quotidian frothiness, the body a so-so medium weight, and mostly smooth, nothing really stepping forward here to make a party-pooping ass of itself. It finishes well off-dry, the caramel/toffee receding a bit, and the inferred fruitiness holding steady.

Well, this does seem very much like an Irish Red Ale, even if it was produced in Germany - sweet, with little offsetting hoppiness, which isn't a typical Teutonic bier trait. Anyways, just weird enough to go along with the craziness that is the holidaze for me right now, so I suppose that's the reason I'm going to follow this can through to the end.

Similar review to what was submitted by chinchill. Has definite "German Beer" taste. This came in a German Beer Advent calendar package sold by Famous Liquors in Chicago West Suburbs.

500 ml can poured into a pint glass, a dark reddish brown with a two finger tan head that dissipates slowly. Advent day 18. The federation has crossed into.....Aroma is dunkel maltiness, and some herbal/bread notes. The taste follows in line, very light. The feel is medium, the carbonation medium light. Overall, a good beer, if you are into maltiness.

Served in a tulip glass right from the can.

Smell: Smells like light hops and light malts. Not much to sniff.

Taste: Light bitterness and smooth malts, has a sweet offset which reminds me a bit of pink grapefruit and a hint of maple.

Mouth: medium to heavy carbonation with average stickiness at best.

Overall: It's alright at best, little biased when it comes to dunkles...when you're used to drinking espresso and someone offers you decaf coffee, you get my drift. Salud!

Claims to be an English brown ale, but brewed in Germany. I would describe it as a weak brown ale combined with a weak German Pilsner taste. Quite acceptable, but not at all outstanding. I would have no problem drinking this again if no more interesting beer was available.

From the Costco Beer Calendar. From the can, it pours a nice bronze-brown color with a lovely long lasting head. Caramel malt in the nose and mouth. Yum!

A very nice Dunkles overall. The can says it is "Irish in character, but strong in enjoyment"