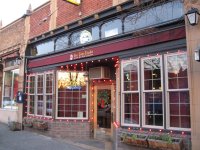 View: Place Reviews
Reviews: 3 | Ratings: 5 | Log in to view all ratings and sort
Reviews by TheBungyo:

I visited Die Bierstube for the first time yesterday, and I found it to be a nice place. It's a sister pub to Feierabend and Prost! in Seattle. The focus is on German beers, with 12 regulars on tap plus one or two chalkboard beers. I had a couple of half-liters (Köstritzer and Ayinger), which were great as always. It was pretty slow when I was in there, despite being the 500th anniversary of the Reinheitsgebot, so service was great. Definitely worth a stop if you want to drink German beer in a cool pub setting.

A good variety of the standard German brews. The menu is priced fairly and the food itself is rather good. The one negative is the wait staff, they seem genuinely uniterested in the customer experience. I will go back, but that is because of lack of other bars in the area that serve German beers.

I have been into Die Bierstube a few times (it's right up the street so it's convenient). I think the best thing about this place is the ambiance; it's very cozy, very neighborhoody.

From my three visits, the tap list has been relatively static. For being a German bar, I figured the brews would lean on the side of rarer, harder to find beers. They usually have a few Hacker Pschorrs, Paulaners, Spaten, and Erdingers (lots of Pils and Lagers last time, almost overkill). They seem to have some regulars that are there all the time and then they switch out for seasonals. Though I have always been a little disappointed, it's great being able to get so many German beers on tap in once place; for that, I can't complain. They have some bottles too but I'm not sure what they carry...usually stick to the draft. Beers have always tasted fresh and clean, which is a bonus with Germans.

Service has been a little iffy. Some bartenders have been extremely helpful and generous (giving samples, talking about the brew). Others have seem disinterested, uneducated about the beer, and oblivious to patrons at the bar. It's been a mixed bag.

I've only had a soft pretzel and sauerkraut but both were tasty, perfect after a few steins. They also have some soup and sausages, small menu but it looks tasty.

Overall, this is a place that is great for the neighborhood but not necessarily a destination type bar. There are several other German bars owned by the same people (Uber, Prost); perhaps they have better selections. Given that Die Bierstube is a five minute walk from my house, it's perfect for what it is.

Die Bierstube in Seattle, WA
Place rating: 3.86 out of 5 with 5 ratings