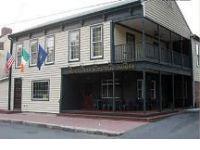 View: Place Reviews
Reviews: 6 | Ratings: 10 | Log in to view all ratings and sort

went to dinner at McClearys with a group of 8 friends. The draft list consisted of about a dozen interesting selections both regional and more national. The bottle list was more extensive and interesting.
I asked our server a question about the freshness of Firestone Walker's Union Jack (since it is a rare find in PA), and she was not very helpful and couldn't provide any insight into my question. When she brought the Union Jack out to the table, the code date was over 8 months old.
Food was good, atmosphere was busy, and the several rooms/bars that broke the building into smaller sections.

McCleary's is situated along the river (and train tracks) in the small town of Marietta. I visit about once a month... technically, my band plays there about once a month, so I HAVE to be there. But I have stopped in on non-band nights for Trivia Night or to see live music.

McCleary's boasts a very large patio that is open during the summer and winter seasons (closed off and heated during the colder months). Inside, the bar area is split between two rooms - the front room with a few standard tables and a bar that seats about 8 to 10 patrons, and the back room where live bands perform. Overall, the atmosphere is a casual to upscale dimly-lit Celtic/Irish style and quite clean and tidy. The have a new, young chef that makes some fantastic food... I typically get the seared tuna, which is awesome! It comes with seaweed salad, rice and seasonal vegetables, plus a salad. Overall, the menu offers a nice variety of appetizers, soups, salads and entrees, as well as sandwiches.

Onto the beer selection. While they do have a standard tap offering of typical imports - Guiness, Harp, Bass, etc. - they always feature a hoppy American craft beer and almost always have a local Spring House Brewing Co. selection, primarily Seven Gates Pale Ale, although I have seen the DIPA on as well. I have seen Victory, Troegs, Founders, Stoudt's offerings rounding out the selection during recent visits. As for bottles, they have all of the regular PA beers - Victory, Troegs, Stoudt's - as well as some DFH, plus Belgians like Corsendonk and Chimay.

Overall, McCleary's is a very nice place with good food and a conducive atmosphere for drinking. I have always had solid service (although I may be somewhat biased, as I have come to know some of the staff over the last year and a half). Servers are usually friendly and prompt. Bathrooms are always clean, even on busy band nights. If you live in Lancaster or York County and like to mix good beer with great live music, then head over to McCleary's on a Friday or Saturday night.

First time here and I'm a little upset it took me this long to check it out. Huge beer selection, mostly bottles though. Pretty much any regional micro is available in bottles plus many imports. Tap list is nice with alot of macros plus a handful of rotating beers. Showcase taps were Bear Republic Hop Rod Rye, Great Divide Oak Aged Yeti, Troegs Nugget Nectar and Sam Adams Noble Pils. Good food and good pub atmosphere with live music. They also have an enclosed deck with ample space. Recomended for a few brews with friends.

Atmosphere: We were there during the afternoon. The deck sounded busy but the bar was empty. The bar was dark with a decent feel, a nice place to have a few pints.

Quality: The pub looked clean, service was friendly and the bathrooms were generally clean.

Service: Bar service was prompt, checking in, running the tab, etc. What I'd expect in a pub.

Selection: A few decent offerings on tap. I had Stoudt's Robust Porter. They also have Spring House's Seven Gates on tap. Bottles featured a few more Lancaster Co. breweries (Lancaster and more Stoudt's). Macros were plentiful though, both bottled and on draught.

Visited the establishment for lunch at noon on a Sunday. It took a while for us to be seated. We elected to sit on the back deck which was absolutely perfect. Our drink order was taken and promptly served. It was a bit difficult to get our waitress's attention for my second beer, though. The beers were both served in the correct glasses, which did impress me. The food was delicious and very reasonably priced. I can highly recommend this establshment for lunch. How it is for dinner I cannot say. Well worth a stop if you are in the area.

McCleary's is my absolute favorite beer bar / pub/restaurant in Lancaster county, maybe in PA. The atmosphere of this place is classic Irish pub. Freddy and Dani, the proprietors have done an excellent job of creating an inviting and down to earth establishment that is welcoming to all.

Service here is great. I have never had a problem with any of the servers or bar staff, and they are all very knowledgeable.

Great selection of beer, runnning the gamut from Belgians, British, German, and American Micros. Plus rotating taps from breweries like Stoudt's, Troegs, Franziskaner, Hoegaarden, etc... Plus, they have all the standard macros fo anyone who may enjoy them or who are bringing friends here.

Great food selection here, ranging from appetizers all the way to filet. Great english food like bangers and mash, and fish and chips (which I swear is a whole fish, its that big), and also some lighter fare, like rare tuna salad and seafood selections. Easily a great date place, so you can easily combine good food and good brew.

Some of the selections here are a little pricey, but that is offset I believe by the quality, selection, and atmosphere.

Overall, a great place that I would highly recommend.

McCleary's Public House in Marietta, PA
Place rating: 3.98 out of 5 with 10 ratings