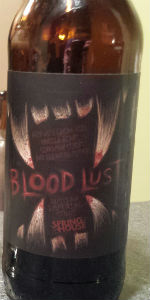 Rated by tsfinn23 from Pennsylvania

Rated by IPAchris from Pennsylvania

Rated by suckaj from Florida

Reviewed by DMXLOX22 from Pennsylvania

Appearance: black, very heavily cloudy. Can barely see if any carbonation is developing. Second looks and some bubbles are noticed forming at he top. Sports a somewhat impressive tan head about half an inch, however dissipates quickly. Not too bad.

Smell: upon first initial inspection, hearty cocoa with a good undertone of malts that give a slight neutral tone. Also gives off a slight alcohol-like punch. Not too bad, however not much else is noticed.

Taste: upon the first sip, a thick, cocoa-like malt is the heaviest flow. Kind of difficult to detect much of anything else on the first sip. Second and third sips reveals a very slight hint of vanilla, possible cinnamon undertones and a decent boozy, lingering, buttery-like flavor on the back of the tongue. Much is going on here, but in a good, balancing way.

Mouthfeel: below average carbonation. Finishes buttery-like and only slightly harsh from the alcohol. After taste reveals the habaneros, but only slightly.

Overall: not a bad brew overall. Not much of a habanero flavor until pretty much the end. I did notice some more vanilla flavor as the brews temperature goes up. I mean, some things were missing, but this one is unique and in a good way. I would probably have again, if it decides to come back around, and I would recommend to a friend. Cheers!