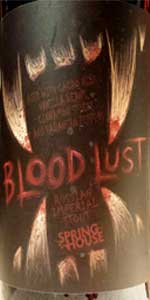 Upon opening: had a a great aroma of chocolate, vanilla, and cinnamon out of the bottle when the cap was popped! Poured into the glass and more vanilla and cinnamon comes out!
Used motor oil black body, no light coming through this bad boy at all! Beautiful tan head leaving some long strips of lacing in the glass.
Taste? Taste you ask? Just really tasty with tons of chocolate up front, then vanilla with a nice wave of cinnamon and finishes with some of that habanero burn; not enough though to be a hindrance just enough to add character.
The mouthfeel is a little thin though for me, expected it to have more of a lingering tongue coating roasty feel.
Overall, I think this is a terrific beer! I thought that perhaps the addition of all those adjuncts, while sounding great, might not work together, but the bottle I have is really showing some balance between everything.

A - Pitch black pour with a very thick, creamy, toffee colored head that covers the top.

T - Cocoa sweetness up front which becomes subdued but there from start to finish, cinnamon is present but stays tame and blends well, some dark chocolate bitterness, vanilla cream (but very little), and some habanero burn midway through until the end.

M - Medium body and pepper warming in the back of the throat.

O - I'm enjoying this beer. At 11%, the ABV is undetectable but then again, the pepper heat could be burning the booziness off. ;o)

Pepper heat comes through in the aroma, don't get much else in the nose. Can taste the cinnamon, vanilla, cacao and pepper. Pepper takes the back seat, the pepper flavor is there, but not much heat. Pretty well balanced. Moderate carbonation keeps the beer pretty easy to drink despite the 10.5%. Overall, good brew I'd pick up again.

low full mouth feel that clings on a bit to leave some nice flavors.

really well done and really smooth and easy to drink.

I'd like ot try the regular verison of this.

sadly the peppers over shadow the cinnamona and vanilla a bit for me. Cheers!

Was looking forward to this one. Found a bomber at a local bottle shop so I grabbed it. When opened, the smell was good, you could smell a bit of the Habaneros. Pour was dark but when tasted, NO HEAT at all. Disappointing. good beer for all it has without the peppers but I was looking for the warm finish.