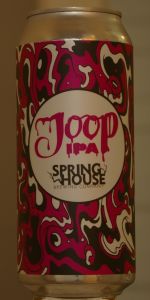 Notes: This IPA is bursting with American hops. JOOP is loaded with notes of grapefruit, mango, and citrus. Clocking in at 6.5% alcohol, it is refreshing and crazy quaffable. Created with massive kettle additions of American hops, this beer opens up with huge notes of ripe pineapple, pithy citrus, and dank permeated hops. As it warms it shows its depth and complexity with notes of sweet malt and tropical fruit.
View: Beers | Place Reviews
Reviews: 6 | Ratings: 36 | Log in to view all ratings and sort
Reviews by SiepJones:

L - Pours a very murky bronze. Almost the color of mango juice. Bubbly head, fluffy. Great legs on the glass. As the beer settles I notice a good amount of sediment in it.

T - Lemon up front, Grapefruit in the middle, then a pine hop finish. Great blend from sweet fruit into slightly bitter pine.

Tallboy can... not what I expected.

I want to add this to The CANQuest (tm) despite my having cut ties with Spring House. When Joop was first released, it was supposed to be an IPA with Grapefruit. Since then, it has morphed into what I believe to be this base IPA with a series of one-off adjuncts, but this is the base beer.

From the CAN: Nada. The label in the approved pic is all that there is. 8=(

I beCAN by Crack!ing open the vent and then I CANtemplated my next move. I utilized a slow, gentle C-Line Glug that resulted in a massive amount of foaming. This gave me additional time for quiet CANtemplation. It finally settled into two-plus fingers of dense, foamy, rocky, bone-white head with excellent retention. Color was an oh-so-slightly-hazy Yellow-Gold (SRM = 4 - 5). Nose was quite grapefruit citrusy with just a tinge of tropical fruit. Hmm. Mouthfeel was medium. The taste was VERY close to the previous Mephiskapheles, also from them, which was supposed to have been a one-off APA, NOT an AIPA.

The similarities between all of their beers are remarkable & not in any good way. This, coupled with their hiring & business practices, is why I have chosen to turn my back on them.

Warming, it became really pithy, very bitter with a definite grapefruit bent. I am a self-described, self-avowed hophead, but this was too much even for me. It seemed to suffer from being overly dry-hopped to the point of saturation & then some. The bitterness was both pervasive & unabating. I am kind of incredulous that I enCANtered this in two successive beers from them. Finish was bitter & dry & I was kind of bitter in return. I feel like Emilio Estevez's character, Otto, in "Repo Man" upon seeing hardcore punk band The Circle Jerks reimagined as a lounge act! "I CAN't believe that I used to like the guys." YMMV.

Pours a light straw color with less than a finger of head. The nose has very light citrus notes. The flavor is dry but there is no strong bitter hoppiness like advertised.

Dank orange appearance out of the can. Tons of citrus with some nice tropical notes. Good hop bite out of the gate with a nice malt backbone. Clean and refreshing IPA. The grapefruit is very nicely integrated. Well done by Spring House.

A pounder can poured into a pint glass appears a very clouded golden color with white cap that fades leaving spotty patches of lace.

The aroma is pretty intense with citrus and pulpy/pith character. The hops are present with their own fruited qualities and almost a hint of mint.

The taste is fiercely bitter like straight unsweetened grapefruit juice/pulp with additional fruity/pulp flavoring and herbal to pithiness.

This is medium in body with modest carbonation. This is a fine beverage, i just would have liked to have seen how good this was without the crutch of adding fruit.