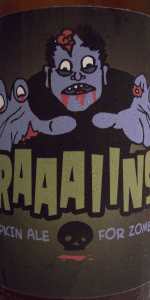 Notes: Our pumpkin ale is brewed with generous amounts of real pumpkin blended into the mash. The subtle fresh pumpkin flavor is enhanced by the addition of a touch of traditional autumn spices and sweet dough, thus creating a beer with an orange amber color, warm pumpkin aroma, a bold malt center and a crisp finish. We are proud to offer you a balanced and delectable fall treat. Suitable for zombies.
View: Beers | Place Reviews
Reviews: 57 | Ratings: 314 | Log in to view all ratings and sort
Reviews by lobos62:

12 oz can- Pours hazy orange with minimal head. Aroma is pumpkins, spice, not just pumpkin spice but there's something else there, very nice aromas. The Flavor is pumpkin, spices, sweet and tart, touch of smoke, peat, so much more complex than i was expecting. Delicious.

The most vegetably beer I've ever had, and the weirdest pumpkin ale. Very bold of them. It tastes super healthy. Notes of carrot and allspice shine through in a brew comparable to the blood of a raw pumpkin, but with the texture of a great beer. Filled up a growler at AJs in Rochester and promptly drank the whole thing

Received in a trade and poured into a standard tulip.

T - Taste is similar to the nose, for a delicious brief flash. Wonderful vanilla and pumpkin, the spices ate super super subtle which I really love, almost an orange note. Odd, but tasty. 4.25

Appearance – The beer pours a lightly hazed orange-copper color with a two finger head of an off white color. Seen within the brew are some particulates with tons of carbonation bubbles seen streaming up through the body of the beer. The head has a fantastic level of retention, slowly fading to leave a moderate level of lace on the sides of the glass.

Smell – The aroma is rather strong of a roasted pumpkin smell with some hints of a bready nature mixed within. Lots of big sweet smells are there as well being mostly of a caramel and vanilla nature, but also containing some smells of toffee and a bit of molasses. Along with the pumpkin and sweet, so too comes the pumpkin pie spices, with aromas of nutmeg, cinnamon, allspice, and clove all present.

Taste – The taste begins with a nice roasted pumpkin flavor mixed with some notes of breadiness. Some caramel sweetness and well as a bit of toffee are in the taste as well creating a moderately sweeter flavor for the brew; at least upfront. Soon after the initial taste and enhancing as the flavors advances are flavors of the spices that were detected in the nose, with nutmeg and clove being the strongest. The sweeter flavors begin losing ground however as the flavor advances leaving a slightly drier taste in the middle of the flavor profile. Some flavors of earth and a bit of hay come to the tongue more toward the end of the taste. These are accompanied by a slight enhancement of the roasted pumpkin flavor as well as the sweetness which had dwindled in the middle of the taste. In the end with the mix of flavors that is present in the flavor profile ends up leaving a lightly sweetened and spiced and rather strongly roasted pumpkin flavor to linger on the tongue.

Mouthfeel -The body of the beer is on the slightly thicker and creamier side with a carbonation level that is one the higher side. The thickness is quite nice for the pumpkin flavors of the brew with the carbonation level helping to accentuate the lighter sweet flavors, giving them just enough of a presence to keep the brew drinkable but not overly sweet.

Overall –A nice pumpkin brew that was not overly sweet, but yet had a nice balanced roasted and spiced flavor. There was just enough sweetness to enhance and compliment the spice and roasted pumpkin flavors.

A: Rustic copper colored body with some lighter golden orange hues around the edge. A small white head disappeared rather quickly and left almost nothing expect a thin ring. No lace to speak of.

S: Huge spice notes, nutmeg and touch of cinnamon. A really doughy and crusty pumpkin pie crust comes through, along with hints of graham cracker. Perhaps a bit of pumpkin is on the end but certainly isn't the focus of this beer.

T: As with the nose, the graham cracker and pie crust is the center of attention, and it's really good. I'm not sure if I've ever had a Pumpkin Ale that focused on this aspect but it works really well. The spices are back to complement, this time with more cinnamon, allspice and nutmeg towards the back end.

M: A bit watery, though fairly bubbly and lively. It does make this extremely easy drinking in terms of body but I would have liked just a bit more character, still not bad at all.

This was one of the more interesting Pumpkin Ales I've sampled and certainly one worth trying. I can't speak for the past batches but this one is quite tasty. It's a completely different spectrum and focus for the style, something of which works really well.

Solid pumpkin brew cinnamon and clove are big but as expected in a pumpkin beer, small format is appreciated