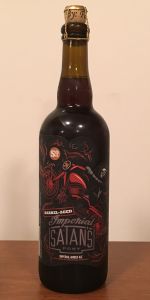 Best by of February 2017 printed on the cork. Muddy red in color, a shade or two brighter than a Flanders, with a finger of tan head. It dissipates to a pretty thick crown with an island of lasting film in the middle, that spins slowly in the center of the glass due to a modest effervescence. Creamy bourbon aroma with vanilla and oak notes, and sweet malt and just a hint of hops behind. The taste is quite similar -- vanilla, oak and toffee bourbon dominates, with some hints of the heavy malt bill behind and a dull hop bitterness on the backend. Very creamy mouthfeel, with strong carbonation behind it. Was hoping more flavor would come out as it warmed, but honestly, there isn't a lot of depth here. Sort of reminds me of Alltech's Kentucky Bourbon Barrel Ale, which I enjoy a lot for what it is. This is probably a tick worse, and it costs quite a bit more. Cool bottle though.

A: This poured a nearly opaque mahogany with a little tan head.
S: It smelled like toasted oak and coconut, with chocolate and vanilla and toffee.
T: It tasted like mild copper hops and bold oak and toasted coconut, with some vanilla and chocolate and caramel. It had a smooth mostly sweet aftertaste.
M: It was thick with moderate carbonation. Great big body.
D: This was a delicious brew, with well balanced and rich scent and taste. The body was solid and the alcohol was incredibly well hidden, so it was all too easy to drink. Would probably age well, but no need to wait. Highly recommended.

Pours a dark mahogany hue with no head, just a soapy slick. Nose reveals cardboard, malt and a hint of butterscotch and vanilla. Some mild barrel notes are present in the flavor profile, primarily vanilla, with a kiss of ethanol, light toasted malt and a little cardboard at the back. Mouthfeel is light-medium in body (but closer to light) with a mild, even carbonation. Overall, decent but past its prime.

L: Poured from a bottle to a pint glass. Had a bright amber color and a clear consistency. There was a half inch of foamy, fairly long-lasting head. Below average lacing.

S: A so-so aroma of hops, malt, caramel, and bourbon.

T: Tasted of a bit of malt, a fair amount of hops, some caramel (could have used a little more), sparse bourbon notes, a little oak, and a hint of vanilla as well. For a beer that advertises itself as being barrel-aged, the bourbon is not that noticeable. Everything seems kind of muted.

F: A decent amount of carbonation with a mostly smooth finish. Medium-bodied.

O: Not a bad beer, but somewhat disappointing. Worth a look, though.

A solid beige head didn't take a lot of coaxing to appear, nor did it take much time to rescind to a full sheet, leaving behind spotty lacing above a deep ruby, translucent yet clear body. Nose has a slightly off putting rotting vegetable thing that precedes an otherwise pleasant oak and vanilla. Luckily, the taste brings none of the unfortunate elements of the nose, but instead picks up where the barrel character takes us. Rolling out of the oak is a bit of alcohol that coincides with the vanilla, culminating in a bit of caramel finish. Feel is mostly thin with a fairly dry finish that leaves mostly an alcohol generated bitter on the tongue. Good value

Satan's Pony Imperial is a fine example of an aged dark(er) Red Ale.
Appearance: Dark Red to Caramel. Very coppery head on a pilsner glass pour which leads to heavy lacing and a finger depth which dissipates slowly.
Aroma: Chocolate and roasted malt.
Taste: Sweet with a very smooth roasted, aged flavor to its roasted malt notes. Strong bourbon notes on the aftertaste.
Mouthfeel: Smooth, creamy and medium-to-light carbonation. Easy to sip, and should be enjoyed with a less than full stomach as Satan's pony rides to fill you up fast if you drink it quickly.
Overall: Well worth the extra money spent. Would buy again to savor. It is more of a special occasion beer rather than a go-to daily brew. I think it is the closest beer to Silver Gulch Brewing's Osculum you can find on the East Coast. Matches flavor, and aroma very closely--19.1 IBU on the Satan's Pony Imperial Aged, and 20 IBU on Osculum Infame.

From the bottle, it pours a darker clear reddish brown color with a modest beige head that soon diminishes to a nice ring, but leaves a bit of lacing. In the nose, it has some bourbon notes along with sweet malt. In the mouth, it is a bit boozy and malty, with caramel notes coming through.

It's a murky ruby-tinted brown with an initial fizzy tan head. There is barely any retention but a slight ring around the glass does leave some small soapy lacing. The aroma has a nice caramel malt sweetness and big vanilla pop from the barrel aging. The taste is good but the barrel dominates everything with it's vanilla. There isn't much depth to balance it. The body is mostly smooth and full with just a faint carbonated tingle.

Bottle best by 2/2017:
Pours a reddish brown out of the bottle, but ends up a very deep amber in the glass. Rusty tan head grows decently initially, fades to the edges. Nice coating of bubbles on any shift in the contents of the glass that qucikly receded to the body.

Nose is fairly absent. I'd like to get some of the barrel notes out of this, but I am finding it hard. I do get a very general impression of a barrel-aged amber (barely similar to Backwoods), and a little vanilla note that sticks out amongst that scent. But it is so faint that I felt I might have been making it up; luckily warmth brings it out a bit more.

The taste is actually quite nice to me. There's maybe a little more burn than should be there, but I don't mind it much. There is a cherrywood like flavor that seems to be the combination of the base beer style with the barrel. The whiskey taste comes out before mid taste, and the more nuanced flavors of bourbon specifically catch up a little later. The tingle of carbonation and alcohol seem ever so slightly like a mixed drink of soda, bourbon, and a little accent of fruit. Warmer it actually turns a little more woody and thinner, and the alcohol peeks out a bit more.

Seems this one has a nice sweet spot in the mildly cold range. Too much warmth actually exposed some facets of the beer I didn't like as much. However, I was enjoying it well enough until I let the warmth get to it. The scent could use a boost, but the flavors seemed to show the base beer, the barrel, and the alcohol. Not too bad.