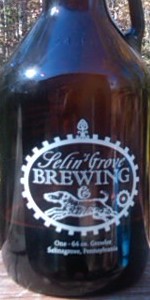 Pretty similar to NG Raspberry Tart. Tons of raspberry aroma and flavor. The main differences I noted are that this beer is more tart, maltier, and has more bitterness (I'm guessing due to a higher hop content). My wife interpreted the bitterness as making the beer taste more artificial compared to NG. Somehow the beer also tasted more soda-like to me, which would seem to be at odds with my earlier observations. Bottom line: this is a delicious beer well worth seeking out. And at $6.50 for a 14-oz pour it's more than reasonable!

Nose: Pure raspberry puree. There's a hint of malts hiding in the background but just imagine the richest raspberry dessert you've ever had and that's what you've got.

Taste: Intensely, overwhelmingly raspberry. A bit sweeter than I expected with much less tartness. If they did a wild/lacto-ed version of this it would be incredible. For someone who doesn't really like overly berry-forward things, I still found this to be an incredibly rich and tasty brew. Oh yeah there's a bit of breadiness under the berries but it's barely noticable.

Mouthfeel: I wish it was a bit fuller, but overall pretty nice.

Overall: Impressive that this much raspberry flavor can be pumped into a beer. Definitely something I'd only want once, but I'm glad to have tried one and thoroughly enjoyed it.

The beer pours a deep rusty maroon capped by an inch of a creamy neon pink head that laces. The nose is fresh picked, sweet raspberries, almost too sweet for my taste. As expected, the sweetness packs an even bigger punch in the taste, but blends well with the hearty raspberries and malt. It reminds me of blushing monk, but is definitely different (side-by-side?). This beer drinks with a near full body, slightly under carbonated, with sweet raspberries up front followed by an unexpected tannin-like bitterness in the finish. It's quite balanced and doesn't drink overly sweet. This beer is worth trying at the brewery and much better than their IPA in my opinion.

I stand atop a spiral stair
An oracle confronts me there
He leads me on light years away
Through astral nights, galactic days
I see the works of gifted hands
That grace this strange and wondrous land
I see the hand of man arise
With hungry mind and open eyes

Dark ruby red pour, either it was opaque or just appeared to be in the dim light of the bar. The beer was pretty flat, no head at all, and little to no noticeable bubbling. Well it is supposed to be a Flanders red and not a genuine framboise (though I don't really know why they call it that anyway). Sweet raspberry aroma, slightly acidic (acetic), earthy. Taste was full of raspberry puree, mostly sweet with a touch of vinegar tartness, bready malts and some earthiness. Syrupy mouthfeel, low carbonation made it pretty mellow. Not bad, but not nearly as good as the kriek.

Big thanks to DaveHack for this pour.

This poured out as a vibrant red color with basically no head or retention. The smell of the beer has a big sweet raspberry aroma, lots of sugar in there. The taste of the beer is very sweet, lots of syrupy raspberry. The flavor isn't very tart. The mouthfeel of the beer is light bodied with a healthy carbonation. Overall it's very sweet, possibly appealing to a lot of people. I enjoyed it but not something I'll need again.

Poured from a fresh growler into a tulip glass. Has a really nice pink hue with a link pink head. Raspberry aroma hits the nose first and it is nice and powerful, not much else going on. The first sip hits the tongue and its tart raspberry and some sweetness from the malt. They work very well together. The beer is not overly sweet, the tartness of the raspberries keeps everything is check. It has a nice smooth medium to full bodied mouth feel. Carbonation was on the lighter side. I really enjoyed this beer. .

A - Opaque purple with a 1/2-finger light purple/pinkish head a light lacing.

S - Tart, pungent, essence of raspberries. Not sweet swelling. Don't detect much else.

T - Tart raspberry wallops the tongue. There's just enough of a malt backbone to let you know you are drinking beer. They must have used a whole field of raspberries to make this beer. It's not sweet like a Lindemans. I'm at a loss for words to describe how good this is. I'd have it as an aperitif, with a meal and for desert.

M - Medium body and light carbonation. Sticky, prickly and I think I got some raspberry seeds stuck in my teeth. Just right.

O - This is sublime. I hearby declare this the best fruit beer I have ever had. Tops their own Phoenix Kriek and I agree with the previous reviewer, it tops the New Glarus Raspberry Tart. Wow.

Framboise from Selin's Grove Brewing Company
Beer rating: 94 out of 100 with 90 ratings