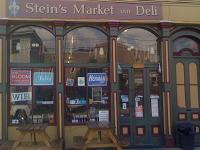 View: Place Reviews
Reviews: 66 | Ratings: 104 | Log in to view all ratings and sort
Reviews by nlmartin:

Steins is permeated by the smell of some really good food. Didnt partake as I had stuffed myself at Deannies. Seriously stuffed! The place was crowded and very busy. The beer shelves are a bit cramped but crammed with good beers. Nice selection of Mikellor and several others. I purchased a couple Fantome beers I havent seen anywhere else. The staff was attentive, efficient and somewhat knowledgeable about the products available. All in all a good stop. I will definately stop at Steins next time I am in town and I will go there hungry.

Deli is awesome with some of the best sandwiches in town. I would recommend the beef tongue or ruben. Beer selection is solid, lots of local offerings and national options. All cans/bottles, several fridges up front by the deli and a beer room in the back. Highly recommend you grab lunch here, and maybe get a donut next door at District Donuts after.

In exactly the opposite order as recommended in a prior review below, I came here via recommendation from a local chef for the sandwiches, and stayed for the beer.

Standing in line, waiting for my (delicious) Muphaletta and Italian Hoagie, I kept reading signs for beers in the back, yet there were beers right here in the cooler. The signs specifically listed directions that would very clearly lead me far beyond my line of sight, so there had to be something more.

Slowly creeping past the deli like I was penetrating an unseen barrier, I stepped out the back door into a neglected, ominous alley, past a staff-only storage room, and through a creaky old industrial door where the sound of angels rang out as a ridiculous pile of gold- I mean beer, lay before me. Towers of bottles were teetering all around me.

Stein's has an absolutely ridiculous selection, and many of the bottles are quite rare indeed. The temperature in the room isn't that great for beer storage, but at least there is no chance of sunlight penetration. This is possibly the best bottle shop I've found in New Orleans, and yet, much like our very own Primo's in Akron, Ohio, this is a deli first and foremost.

Come for the beer, stay for the food. Best dang sandwiches in the country. Great selection, owner knows beer and is very helpful.

Great deli with an even better bottle selection...probably the best in New Orleans. Stopped in on the recommendation of a friend while visiting NOLa and had a great lunch but then spent way too much on beer to take back home...amazing selection!

Based on reviews, I visited Steins for lunch whilst in New Orleans on a business trip

Nice , gentrified funky little neighborhood. Walk into Steins and the place has character and an attitude in a good way. It's a deli that sells take out beer. Posters, signs , batman paraphernalia adorns the walls . I order the Muphuelatta( philly style in keeping with Steins) and cream soda. Excellent sandwich , recommended and would reorder . While dining at one of the communal tables, one of the workers starts to load the beer cooler behind me. I start up a conversation and recommends some local beers to me. The owner is at the other end of the table paying bills and we get to talking. He takes me into the beer room out back. Actually , you go out the door , into an enclosed court and enter a door in an adjacent building. Amazing beer selection. We discuss beers and he hand picks some extra fresh IPAs. Nice selection of quality beers and he rotates the stock to keep it fresh. Suggested another store for some beers I was searching for. Bought a few local selections on his recommendation, Great food, service and selection. I'd go back.

Visited during a visit to New Orleans. I based my visit on the ratings here. I did not eat there, so this is simply a review of the beer and selection. The beer room is at the back through a couple of doors. I have read that people were concerned about the lack of prices. As of January 2017, all of the beer is labeled with prices in the back. The selection is pretty awesome. They had Backwoods, Christmas Bomb, Xocoveza, among other seasonal releases. They had a good selection of Bruery beers, as well as a number of Fantome and other European beers. I would definitely recommend a visit if you are in the area.

I headed straight back to the beer room when I arrived. One of their guys came in a couple minutes later to do some stocking and immediately helped me. He hooked me up with a local brew called Parish Envie American Pale Ale and a couple others. I never heard of Parish Brewery/beer but since it was super fresh having been bottled 6 days earlier and highly recommended I was pretty sure it was going to be good. I then went to the front of the store and my wife was already eating what looked like a very good turkey sandwich. I ate the other half and all I can say is "it was awesome".

It was pretty quiet on a Thursday afternoon so I introduced myself to Dan Stein. He was pretty receptive telling me about the owner of Parish Brewery and how he recently changed his yeast. Dan then brought out a month old Envie from the cooler so I could compare the same beer using two different yeasts. Pretty cool! Had the beer minutes later when I left the deli and it was damn good. Overall, a great deli with an excellent beer selection owned/run by a guy that knows a hell of a lot about beer!

One of a kind!

This place was about 2 miles from my hotel on Canal Street and is like a beer oasis compared to those sad package shops on Bourbon Street. I also love that they open at 7 AM, so if you are conferencing you can plan to be there at 7 and still get back for work. There's lots of singles in the sliding coolers in the main deli portion, but if you follow these signs, go through the door in back into their private alley, and walk into this room in the back, you will be glad you did. There's tons of choices from Stone, Founders, Terrapin, The Bruery, Brooklyn, and Prairie to name a few. Good regional stuff from Saint Arnolds, NOLA, Southern Prohibition, and Parish to name a few more. Found Tilquin Oude Gueuze & 2013 Bigfoot sitting on the shelf! I spoke with a guy who worked there who was pretty passionate about beer and brought the Saint Arnolds Bishop's Barrel 13 out of another room after talking to me for awhile. This place is legit! Prices weren't on the bottles or the shelves, which was a bit annoying. I didn't try any food.

Cool spot with good but slightly overpriced sandwiches and a very nice beer selection in a separate shed in the back. Carefully curated with a nice mix of local and regional beers, some limited barrel aged offerings, and a handful of fantome and other difficult to find euro brews. Lots of crooked stave stuff. A few bottles from Grassroots, a pleasant surprise.

Downsides: none of the beer, in a separate building even, is priced at all. So you grab your beer and take it to the counter and THEN find out the price. Nothing shocked me since I bought hard to find and expensive sours and was expecting high prices. Still to not have anything labeled is pretty annoying. Also I found the staff either largely indifferent or too-cool-for-school tattooed hipster types that automatically assumed I didn't know much about anything. Guess that's what they deal with most of the time in this city but it's still completely insufferable.

A nice little shop with specialty foods, gourmet items, as well as deli style foods and drinks. Didn't try the food, but looked like they had some good sandwiches and lunch items.

Was told this was the go-to place for beer in the NOLA area... Mixed conclusions on that point...

The coolers up front house about 4 more coolers worth of beers in singles and 750ml bottles. Nice. The beer laws here also allow drinking a beer from the bottle as you walk down the street, provided it's in a paper bag, which they are happy to provide. So, you can buy a single a stroll down Magazine street while sipping a cold brew. Cool!

Strangely, you're not allowed to drink beer inside nor at their tables outside, even if order food. What strange alcohol laws and regulations we have in the various parts of this country. Eh, not the proprietor's fault.

OK, so... The coolers are nice, especially given the location, but nothing crazy. That's not all. Not even much. The real beer room is not obvious. I had to ask and almost left thinking that was it. They have a room all the way to the back, out a door, and around a corner through an alley/courtyard where the real selection is. Secret beer lair? Not sure if this feels cool or shady...

There you fin a 15 by 15 space with just racks if beer. Dozens of breweries, both craft from around the world and local micros I'd never heard of. Found some good offerings from St. Bernardus and Clown Shoes that I've not had luck finding back in NY. Definitely a great selection given the size of the space and the other options I've found in NOLA.

BUT, do I judge based in that? Or in absolute terms? Compared to what we have in NY, Wegmans grocery store has a larger and almost as eclectic selection. I can think of at least 5 places nearby that dwarf what's here and my giti beer store at home has probably 100x as much. Also, some glaring omissions; I didn't see any Dogfish Head here, for example, so this is a place to go and browse to see what they've got, not a place to go if you're looking for something specific. Unless you're looking for something rare and hoping they might have a bottle because you'vr looked everywhere else.

Still, very cool place. Im told the craft beer scene in NOLA is a good decade behind the cutting edge, and this seems to support that theory if this really is one of the largest selections in the state. Not sure how much stock to put into that, though, considering that both Whole Foods and World Market have pretty good selections.

Great beer selection in the back, go in and pick out what you want. Also, try a sandwich before you leave, yo will not be disappointed. Always a good conversation to be had if you are open to talking with strangers.

Great little whole in the wall with fun surprises.