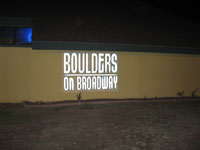 Reviewed by EyePeeAyBryan from Arizona

4.18/5  rDev +4.8%
vibe: 4 | quality: 4 | service: 4.25 | selection: 4.25 | food: 4.5
I've got nothing but great things to say about Boulders. It was the very first place I visited that really showed me there are bars that care about beer and the people who drink it. If I'm going anywhere, Boulders is isually the first place I'll consider (due to it's proximity to my home). Not only do you get a solid beer lineup but the food is killer. Swing by for your hangover cure in the AM on Sat/Sun because they've got a great brunch menu and the service is always excellent.
Jun 05, 2014

Reviewed by waterlinesaz from Arizona

Reviewed by LittleDon from Texas

3.93/5  rDev -1.5%
vibe: 3 | quality: 4.25 | service: 4 | selection: 4 | food: 3.5
Ski lodge meets sports bar vibe. Dark, tall ceilings, with an irregular shaped floor plan. Four tops and booths with seating both upstairs and downstairs. Went there on a Thursday for a beer and some food. Not many people there. A mix of interesting and WTF beers (should I get the Mikkeller or the Coors?). Enough to choose from, though, I was able to find 2 or 3 beers that were interesting. Service was good, knowledgeable staff. Food was OK. I had a roasted veggie sandwich and shared nachos. Overall, not a bad place, but not terribly interesting. Would I go back? Probably, there aren't a whole lot of places in the immediate area and it would be a good place for a beer and, maybe, a bite. Definitely worth a visit if you're close by and have never been. Would I make it a regular stop if I frequently visited Tempe? I think the beer list might grow old unless there was regular rotation. The number of macros was a bit surprising. And the food was just OK.
Apr 19, 2013

Reviewed by Spiderbeerman from New York

4.75/5  rDev +19%
vibe: 4 | quality: 4.5 | service: 5 | selection: 5 | food: 5
There was a strange odor when we arrived. Like maybe a vacuum cleaner's bag needing replacement. This was a minor deal really. The menu is extensive and the beer selection is great. The wait staff was all friendly, polite and quick. If you're ever in Tempe check it out. We went here for lunch. I bought an appetizer to share and it was called Classic Bar Stuff, a sampler of fried zucchini, cheese sticks, onion rings, and wings with a couple of dipping sauces. For my main course I got a Grilled Pesto Chicken sandwich with waffle fries. Very nice! I ordered a lemonade first as we walked a ways to get here and then I ordered For Peaks Hefeweizen. It was well worth the long walk in the hot sun to find this oasis in the desert!
May 21, 2012

Reviewed by ChadC12 from Arizona

4.4/5  rDev +10.3%
vibe: 4 | quality: 4 | service: 5 | selection: 5 | food: 3
My favorite place in Tempe to grab a beer. I love the selection here or atleast it satisfies my taste buds. I have come across some good finds here. The do have a decent selection of seasonals and limiteds in the cooler. I love the service here, fun knowledgeable bartenders make for a good time. Food is alright, nothing special but does the job. I have to say I've never left disappointed. My favorite bar right along with papago. Location is great too. 5 minutes from the heart of Tempe and asu. Also can't wait for evil twins yin and yang on Monday!
Jan 20, 2012

Reviewed by aval89 from California

This place has a huge dinning area with a bar that seats around 8-10.. I believe its got around 28 taps with a decent bottle list.. the taps have seen the likes of Hopslam, The Abyss, Odell Bourbon Barrel Stout, Burton Baton & other great brews.. the usual suspects here are Left Hand Milk Stout, Bells Two Hearted, Stone IPA, Titan IPA, & other great regional brews. Lots of rotating stuff from Odell, Ska, NB, Rock Art, SA, Bear Republic & all the local AZ brews.

Reviewed by yemenmocha from Arizona

4.15/5  rDev +4%
vibe: 4 | quality: 4.5 | service: 4 | selection: 4 | food: 4
Better than the Old Chicago that was here before, though the menu is eerily similar... almost reminds me of that Coming to America movie with Eddie Murphy that had "McDowell's" instead of "McDonalds". The Boulders menu has the same pictures of food and many identical food items as the Old Chicago here before it. Hmmm.

Good selection of craft drafts here at rather reasonable prices. I've been amazed at some of the more rare craft beer they've offered at times, and I can usually find a few favorites even if the rare stuff isn't to my liking.

Appetizers and pizza are fairly good for a beer bar, and certainly better than the competition in the Tempe/So.Scottsdale area. Parking is usually decent but I'm a daytime visitor only.

Rather dark inside too.

Reviewed by jeffaz02t from Arizona

They have a pretty decent tap list, the only place I can think of with a better tap selection is Papago. Their bottles are pretty good too; ask your server if there is anything not listed on the menu in their coolers. They often house a few extra X-mas beers or other special releases.

The service is above average for a bar, with most staff having a decent amount of beer knowledge and your glass is never empty long.

I avoid the food altogether. There are better places to eat in the area so I tend to stick with the beer.

Reviewed by DPFRD from Arizona

Bottle selction is good too. Had squall for the first time here.

Food is ok. Don't expect to be blow away.

Hang is good, employees are awesome, know their beer, and can hold some liquor.

I like to hit this place up on weekends as it is large enough to get a table in on a friday evening without a wait, their beer selection rivals any place in town, and it's in the tempe megapartyarea.

Reviewed by IBhotterthanU from Arizona

4.15/5  rDev +4%
vibe: 4.5 | quality: 4.5 | service: 3.5 | selection: 4.5 | food: 3.5
My local watering hole, "where everybody knows your name." One of the owner/mgrs is almost always there to chat you up, and genuinely interested in their customers/feedback. The beers change up pretty often, but some of staples, like that Apricot Ale by Pyramid...totally rocks. And usually some limited release from Stone, or at least just the IPA is always on. Also, don't over look the bottle beers selection. Wednesday, I think...don't quote me, is bottle beer special night, and they have a great selection of Belgians and Abbey ales in that cooler.
This place is great. And Tuesday and Saturday are trivia nights. Get there early though, place fills up quick!
May 15, 2010

Reviewed by rowew from Colorado

3.78/5  rDev -5.3%
vibe: 3.5 | quality: 4 | service: 3.5 | selection: 4 | food: 3.5
Happened to be staying across the street, and had to wait out a shooting investigation (no joke), so we ended up staying here a while. I get the impression this used to be an old chicago or something similar, and the menu hasn't changed much from that, but there is a bit of a local twist. The food was all fine, nothing too exciting, but it went well with the beer. The beer selection was good - 30 or so taps, with a nice selection focused on the south west. Prices all seemed reasonable, there was also a dartboard and a pool table. Crowd seemed to be college students, but was pretty laid back.
Mar 31, 2010

3.73/5  rDev -6.5%
vibe: 4 | quality: 4 | service: 3 | selection: 4
If I do a book on lesser known bars around the country, I would likely include this one. A short drive from Tempe's university hotels, with ample parking, close to the highway. A medium sized place, busier than they could handle at lunchtime with us older guys dropping in. About 24 taps, several with a good selection of lesser known names, an improvement from the web selection. Oh, 60-70 bottles with again an attempt to provide drinkable craft brews that may get lost in the shuffle. Glazed over windows, this is an old school bar, and a welcome supplement to the big chain restaurant/bars about town.
Feb 05, 2010

4.08/5  rDev +2.3%
vibe: 3.5 | quality: 4 | service: 4.5 | selection: 4
On Broadway....there is Boulders, located across the street from an Arby's in what looks like a building that once housed a family restaurant. There didn't seem to be anything happening at this neighborhood, so I was surprised to see the parking lot full of cars. Well, this isn't a place you'd take a family...if you're young like me, you would take some of your friends here. It looks like a college dive, but don't worry fellow BA's, the beer selection is good. About 25 on-tap, with beers like Dead Guy, Stone IPA, Four Peaks Kilt Lifter, Sierra Nevada ESB, Schilling 90, Blue Paddle, and Sam Adams Double Bock. Found below the taps is a fridge that houses beers from the bottle/can (Oskar Blues, Arrogant Bastard, Great Divide, Nimbus). I saw several pieces of glassware being used, including the new SABL specialty glass.

My bartender seemed quite knowledgeable with the beer. I asked her a couple questions about one of the local beers, and snapped back the answers quickly. My favorite was when she remarked about drinking local, and how fresh it would be. To a beer geek, I liked hearing that. I was asked if I needed service a few times as I sat at a table near the bar with a pint of Kilt Lifter for just $3.50*, what a deal! I've seen BMC pints at the that price. I soaked in the beer and the trivia game the establishment was playing with the crowd. They could probably improve the layout of the place; the bar faces away from most of the action. Apart from that, this is worth a stop if you're young and in Tempe.

* I later learned they have happy hour all day Saturday. That means all draft beers are $3.50, excluding Dogfish Head beers.

Reviewed by NitroGen from Arizona

When entering take a left past the hostess stand to the bar, which is multi-level, lots of seating pool tables, tv's and video games.

They had 27 taps, 41 domestic bottles and 34 import bottles on the Menu: (http://www.bouldersonbroadway.com/beer.html ) I ordered the Breckenridge Vanilla Porter, which was served in a beer mug that had been chilled ice cold in shaved ice below the taps! . The happy hour prices were a reasonable $3.00 for drafts, except for the 90 Minute DFH which is more $$.

The menu was diverse but I ordered the nachos, which were ok, but nothing spectacular.

Chris, the manager, came by my table and introduced himself. Had a nice talk with him and found that the majority of the clientele preferred ice-cold mugs, yet they were looking to attract more people who appreciated good beer.

Since this is so close to my work this might be a place to stop by with co-workers for a quick beer.