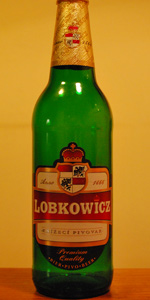 Bought at the supermarket in Olomouc (Moravia, Czech Republic). 0,5 l bottle poured to a Pilsener glass.
-Clear transparent look.
-Bimbo bread smell.
-Rye bread taste
-Feel is bitter but not too much.

Just an Okay beer for the style an country.

Good that this lezák is quite your traditional type with enough Saaz hops to make you feel good. Although not on the extra hoppy side and it is also only 4.7, it smells quite densely Saaz and the good thing about the taste is that its bitterness is just good, mildly sweet too. Actually it's quite satisfying as a lezák, I enjoyed it, reminding me of the underground brewery pubs of Prague...

Served cold from 500ml can into pilsner mug.

T) Again, follows the style closely, tasty bready mild malt flavours; slightly more pronounced saars hop bitterness than many Czech pilsners, which perhaps detracts from it slightly in my book, but the beer is by no means out of balance.

F) More or less standard for the style; the carbonation is well judged and gives a smooth mouth feel, not gassy at all.

O) Good example of the style; slightly towards the bitter end of the Czech pilsner spectrum.

Grabbed while in Prague yesterday. Out of all the bottles this seemed the least like I would like it, so I'm getting it out fo the way.

NOse is light, big corn broth like, just a hint of a pilsner malt, bit of skunk, a strange rice milk like aroma too, lot of corn husk like, faint straw, and a touch vegetal.

Taste brings more of the light corn, like corn chowder almost, little husk, very light straw and toasted grain, little pilsner malt with that. It has a light skunk flavor, and a light lager flavor but not a lot of either, as well as a bit of a grassy hop character that gets somewhat bitter overall and brings a strange earthy weird bitterness that I can't really put a label on. FInish is fairly dry, but a bit more skunk, and just a bit of a sticky feel, more corn flavor as well but much less now.

Overall taste more like a macro style Czech pilsner. lots of corn and it even brings corn flavor, husky, bit of skunk, not very good and a far cry from the great beers I had in Prague.

This is a beer a collegue of my took home with him for me. The beer is in a nice bottle, see the picture.

This is one of the oldest breweries in the country, already brewed beer in 1466. Columbus had to find the America's years later.

Poured in my Struise glass this beer looks ok. Nice white head with nice strings of carbonation. Smell is normal and typical for this kind of beer. Some sweetness and malts.

The taste is pretty bitter because of the hops they used. That makes this beer not very interesting (or you must like the bitter hopsort they used!) Worth drinking, not spectacular.

Lobkowicz Premium Lager from Brewery Lobkowicz
Beer rating: 75 out of 100 with 31 ratings