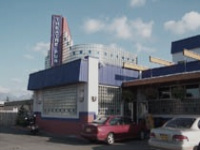 View: Place Reviews
Reviews: 6 | Ratings: 15 | Log in to view all ratings and sort

A very cool place! A great place to eat, drink and see a movie. How many places can you do that? Not many.

They feature Mooses Tooth beer which is always a good choice. They have a full range from lagers to IPA's. The Mooses Tooth brewery is just a few miles away so it's always fresh. If you choose to watch a movie you can purchase a brew and drink it during. They also have Mooses Tooth pizza, some of the best pizza ever, and a full menu as well.

I would highly recommend this place to anyone looking for a great time!

the sibling of the Moose's tooth. the Bear tooth is a rather unique place, with an atmosphere all it's own to go with each section of the establishment. the bar/grill side was the after work shift beer joint for myself and my good friend Post when we were working for a landscaping company who's shop is just down Northern lights Blvd. from there. the bar side at least at that time of day is a bit busy, and if we got off the slightest bit late there was sure to be no seating. never the less loud and packed as it may be, the bar is a nice welcoming place, and the staff treats everyone with equal respect, from the filthiest construction working punk rockers, to the most uptight suits. then there is the cafe' type area where you can be under 21 and still go for a bite, I don't know much about that area, as I never have any reason to go there, but it seems more quite and laid back than the bar, what a suprize right? anyway last but not leas there is the theater. stadium seating like any theater, but with long narrow tables in front of you and a bar in the rear of the down stairs (the upper balcony is for under 21 folk) also there are private booths in the back you can reserve in advance for $20 a four person booth or $10 for a two person. if you reserve a booth you get to bypass the line and get first crack at the bar line. also prior to the start of the movie, and maybe during but i don't know on that, you can order food and they deliver it to you while the movie is playing. the films are not first run and sometimes even old. last summer for example they were running old classics on thursday nights, and I reserved a booth for both "A Clockwork Orange" and the original Australian cut of "Mad Max". as far as the food goes, from the bar/grill, I highly recommend the calamari. on the other side they have grand pizza and burritos. the specials should never be over looked either as they tend to employ some rather good up and coming, creative cooks.

My C/S host was fading and I was coming on, so she recommended that I walk over here, although it would be the same beers as at Moose's Tooth that afternoon. Baby, you were crashing and I was in champion drinking mode! Further, my focus has always been on places vice beers. I drank Rolling Rock for years, endlessly. I could definitely hang out and drink at a new place.

As I walked up, I noticed that it was a long, narrow building running East/West along West 27th Avenue with a long window front and the B & G entrance nearer the East end. The m.d.s. was at a slight L-oblique. Booths ran along the windows all along the length of the building with standard tables and chairs center. A low, undulating, eggnog-colored cement wall separated the restaurant area from the bar area. Further, a snaking, undulating mosaic ran along the floor between the wall and the bar. The kitchen was to the extreme left. The polished, laminated, "J"-shaped bar ran along the right side with the lavs just past the end of the bar.

I had a good time hanging out with the fellows at the end of the bar. They were a group on a hiatus from working up in the oil fields. Here is some advice from them: Time to a Japanese person equals death. NEVER give a Japanese person a clock/watch as a gift.

Same beers as at Moose's Tooth. IPA remained a favorite.

Went to this establishment a few weeks back when I first came into town. A very unique place where you can go in and watch a movie while eating dinner and having some decent brews. They serve a selection of brews from Moose's Tooth. Their menu is similar to Moose's tooth but does have some different things. There is a separate restaurant area from the theatre where you can enjoy the food and beer. It gets pretty busy for the movie and at arount $3 it is a cheap movie. Overall I have to say I enjoyed going to this place and recommend it to anyone who hasn't tried it yet.

I went with a friend to the ajoined theatre pub on a trip in to Anchorage, with some fairly low expectations. I was pleasantly surprised, after I figured out the place, how good the place was. The bar was a tad restrictive - two pints per person - but I was drinking light; they had a good chunk (all?) of the selection that the Brew Pub had. The tender was helpful in offering suggestions for things I might like there, and the food was /darn/ good (Though a tad salty on some of the appetizers.) It was a little /too/ dark to eat comfortably - my fault, possibly, since I was at a dark and squinty film - and the lobby area was crowded and dirtier than I'd like from a place where I plunked down that much money. I'd vastly prefer it if they ran off some of the younger crowd, but there's not much that can be done in that regard. Otherwise, the Greek Menu was great (for Alaska!), and the faculties they had direct control over were fabulous. It makes for a good night on the town with friends. Come early to get a booth seat - they're worth it!

The bear tooth theatre pub is the sister establishment of the mooses tooth. The same beers and some others are offered here as at the tooth. The biggest difference is that the bear tooth has two eating venues and a theatre. The first eating venue is the bear tooth grill which is a nice, mellow bar with booth seating and great quiet ambience. The second is more of a cafe style area (totally seperate from the grill restaurant style area) where there is both booth and table seating and much busier place. The theatre is a unique place in that you can drink your beer and eat food while watching a movie. The movies are the same movies you would see on the new release wall at the blockbuster, but tickets are only $2.50. there bear tooth menu is similar to that at the mooses tooth but has different items also. Great burritos, pizza, fish tacos, and other finer items in the grill side of the establishment. The bear tooth is a wonderful place to go and have a good beer and a cheap date movie. Or just to go and have a good quick meal for lunch or even a sit down dinner in the grill. They have the same first tap every month that the mooses does as well along with occasional other specialty brews. They also feature alot of outdoor movies you would not normally see in a movie theatre (peddles paddles, warren miller flicks etc.) And have live music venues on occasion as well. Good food, Good beer, Good movies, and good atmosphere. Try the black bear burrito with steak or any of the pizzas. On the lighter side, they have good salads as well that are killer with the raspberry wheat beer. Bomb!