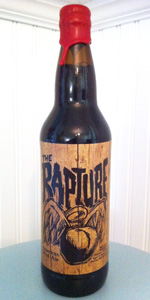 Bottle shared by Thorpe429. Thanks Matt.

The beer is brown, with a thin beige head. The aroma offers coffee, malt, booze, and barrels. The flavor is of alcoholic coffee. Bourbon and oak are quite prominent as well. Too much barrel character. Unbalanced. Ok stuff. Perhaps worth another try, should the situation present itself.

Enjoyed on tap, possible the best beer I have had at the brewpub over a couple of trups. Jacob and Jeff used barrel ageing and Brett. A brown ale, a flanders with 8.9% a.b.v. in this batch. The Brett makes it wild. Sour,and the brett makes it palatable. Good drinkability.Big sour aroma.

Bottle from klipper. Thanks dude! Served in a random glass at Edward's Labor Day cookout.

A - Tan foam settles to not much; there's maybe a thin collar. Murky purple-brown body looks a lot like plums.

S - Very sour and oaky, with acetic plum vinegar, funky cheese, hints of bourbon, and a slightly rancid note to it. It's not a very subtle beer and the flavors seem to be fighting a bit, but it's improved since the last time I had this.

T - The taste is a fair bit sweeter, with more of the fruit and malt base showing up and less acetic sourness. There's a more lemony lactic vibe, as well as some oak and a slight carbonic seltzer flavor as well. Bourbon is pretty mild, and the vinous plum flavors are more suggestive of wine barrels. Alcohol seems to have mellowed since last summer. More of a 3.75 here, so I'll be tough elsewhere.

M - Medium-bodied, with zesty carbonation, moderate acidity, and a dry tannic finish. Not much alcohol warmth either.

D - This has gotten a fair bit better since when I first had it, but it's still not a particularly great American Wild. It gets very acidic quickly and it's a bit lacking in integration. However, as a 'first' attempt at a sour it's solid, albeit rough around the edges.

Thanks for the bottle, Derek.

Pours a murky amber color with an off-white head. Tart fruits are present on the nose, especially plums and raisins. There’s a definite acetic quality as well as perhaps some port or sweet red wine. The flavor is a bit leathery and has a strong balsamic note. Some more heavy red wine character and similar dark fruit notes. Definitely acetic, but not bracingly sour. Medium body with low to medium carbonation.

On tap at HopCat yesterday afternoon. Served in a HopCat tulip.

Beer is a nice reddish-brown with a bit of a purplish hue. Single-finger off-white head that sticks around for a bit and some nice spotty lacing, and a thin collar throughout.

The nose is the highlight of the beer. Initially the plum and lactic notes really come froward and dominate. As it warmed, notes of Brett came through a bit more, and then finally a healthy dose of bourbon courtesy of the used KBS barrel. Interestingly, it really did have some KBS character to it rather than generic bourbon.

Overall, the taste was quite nice, though not as complex as the nose. The lactic character overtook the other elements of the beer, though not too much so. Notes of plum and bourbon were certainly there along with some restrained funk.

Body was light with moderate carbonation and fairly-brisk acidity. Dry finish with a medium pucker factor.

Really nice brew that I was really glad we made it for. Looking forward to seeing how this develops.

EDIT: The bottled version isn't nearly as good. This could be a difference between tap and bottle or could be bottle variation. Bottle we opened was heavy on roast and the barrels and didn't have much sourness. The plum character was quite mild.

Smell: I get some toffee, malt and booze, perhaps a hint of bourbon

Taste: A bit messy and I found it somewhat off, similar to the aroma with toffee, coffee, booze and some oak/bourbon

Overall: I wasn't particularly impressed with this one, it seems a bit confused as a beer.

22oz bottle shared by me at WLV Pig Roast. Poured into Narke tulip.

S - Booze, oak, some light sweetness, malts. A lot of different things going on here that don't really meld all that well together for me.

T - Booze, oak, bourbon, burnt sugars. Again, kind of a mess here and not sure exactly what they were shooting for on this one. Lots of oak and alcohol, even at 9.5%.

O - Not all that good of an example of a Wild Ale to me. Lots of stuff going on here in all different directions, which makes for quite a mess. I might try again, but there's way too many other sours out there I prefer. Can't recommend.

I had a generous bartender at the Hopcat share one of his personal bottles with me because we were there all the way from Maryland. Thanks Steve!

Appearance: Pours a dark mahogany color with mild head that fades away to nothing.

Smell: Wow, this one is super complex. Bourbon with sweet dark fruit, roast, a mild vinegar sourness and some dark chocolate. Everything blends together wonderfully.

Taste: Even better than the smell. There is a dark fruit sweetness up front. Some caramel from the malt. The KBS barrels add some chocolate and a very smooth bourbon note. There is a vinegar sourness that intensifies as the beer warms. So many interesting flavors blended together so well.

Overall: So complex and really good. Everything worked together perfectly. Search this out if you get the chance, it's worth your while.

Big thanks goes out to 67couple for sharing this one at a recent tasting! Bottle #149! Served from bottle into a Boulevard tulip. Poured murky brown with a half finger off-white head that subsided to a minimal amount quickly. Maintained decent lacing throughout the glass. The aroma was comprised of sweet malt, sour, tart, acidic, and wood. The flavor was of sweet malt, sour, tart, acidic, vanilla, wood, and plums. It had a light feel on the palate with high carbonation. Overall this was a pretty decent brew. I was a little off-put on this one as to what to think of it. There was so much going on that it really all seemed to run together and overpower other aspects going on. I don’t know what the brewer’s goal was with this one, but I’m sure this was not it. This definitely hurt the drinkability of it. However, the aroma was quite pleasant and well balanced. This could have been a really nice brew if the flavor followed along with the notes of the aroma. Worth trying to judge for yourself at least once.