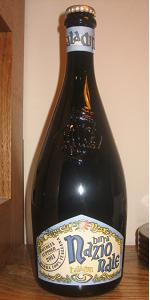 Reviewed by spectru from Florida

This may be my first Italian beer. I bought one bottle on its appearance. Its price was not marked. the receipt said $4.79. Overpriced..

3.04/5  rDev -18.1%
look: 2.5 | smell: 3.5 | taste: 3 | feel: 2.5 | overall: 3
Pours a hazy golden yellow, brief 1.5" champagne head that settles after a few seconds to a thin ring, no lacing. Nose is very yeasty - sweet fermented dough, light stone fruit (apricot), lots of hop spice, even some muskier pine; as it warms, some sharper, sweeter aromas kick in that really remind me of champagne. Taste is very yeast forward - fruity, estery, boozy, and vinous - with a healthy amount of black pepper and coriander. Carbonation is crisp, though it drinks a bit oily, and despite the moderate ABV suggests some heat on the finish. Overall, prefer others within the style.
Jul 05, 2021

Look: Hazy golden body beneath a massive head of white. Excellent head retention and lacing.
Smell: Sweet malt, yeast, floral and spicy hops.
Taste: Rich and full with sweet and grainy malt, floral and spicy hops, and a mild bitterness. Slightly honeyish with a semi-dry finish as the malt fades leaving hoppy spiciness behind.
Feel: Medium bodied with a fine-bubbled natural carbonation that's gently effervescent, bristling, and then airy and smooth.
Overall: A basic golden ale, but one that's bottle conditioned with an interesting yeast character and wonderful mouthfeel and lacing.

This is very basic, but cleanly brewed. It would probably pair well with a lot of different types of food. There's a light, clean, and floral hop character, with some yeasty spice, a touch of crackery and just lightly sweet malt. It works very well on a hot day while grilling.

This is quite drinkable, and goes down very easily. It's crisp and super clean.

This is nothing that's going to knock your socks off, flavorwise, but it's well-brewed, with no flaws, and it's super drinkable.

Released in 2011, Nazionale was the first Belgian-inspired beer of all-Italian ingredients (per Baladin's website.)
However, Looks are average for the style; a fuller yeast would help create more foam and protein swirls. Smells tell me there are some spices to complement the sweet malt. Tastes come in very balanced and strikingly refreshing and cleanse the palate for more of Bob's World-Famous Soup. Finish is fine. But, I ask myself if this is close to a wit.

While this is my fifth from Baladin, my other four came during my pre-BA days and I was on my quest to complete "1001 Beers You Must Taste Before You Die." All four were over-priced and over-promoted. While this may be part of the Italian way, I shied from more Baladin. Then just now as I was drinking Nazionale, I went on their website for the first time and see that Baladin's founder and main force truly is a character and truly does want to spread the gospel of Italian beer. So power to him and his genius and power to Italian crafters.

But frankly, to be competitive in the world of craft brewing... they have got to lower their prices.

Reviewed by 3Vandoo from Canada (QC)

Look is quite boring but honest; the head did not even showed up. Not even to say "ciao" and not even "a presto"...

But the colour is a clear gold, a golden that reminds me of scotch, actually if you look at the glass now it looks like a good single malt... finally she might be a tease, let's see!

Smell: A shy hoppy presence is there with a hint of spices, but what? More mystery.

In mouth; her Italian Belgian character is present, candy sugar; malt, hops and clove are present; not bad.

reading the other reviews I think my bottle might have been to war or something as we never know with Quebec's SAQ, bottle says better before october 2020; so in theory we are in the prime but I might have got a bottle that was damaged.

3.91/5  rDev +5.4%
look: 3.75 | smell: 4 | taste: 4 | feel: 3.75 | overall: 3.75
when i saw a can of baladin for the very first time last week i was intrigued, i am used to the fancy bottles, and this looked sort of cheap compared to what i think i know about their aesthetic. a closer look revealed it was shipped in a container and canned in the states, likely by the distributor, which i have seen before on some beer from austria, i would think this would be for cost saving on heavy glass shipping across the ocean, but if thats the case, the cost saving doesnt seem to be passed on much to the consumer, as this was north of seven bucks for a single 12 ounce can. that said, im still glad i picked it up, its a nice beer, even if the canning itself doesnt seem quite up to best standards. its a spiced brew, with notes of coriander and clove in it, hazy and earthy malty as a base, with a neat italian yeast element that isnt quite belgian and not exactly wild, but funky and rustic, lightly estery and vinous. its almost like a wit, some haze to it, and an orange and coriander vibe, white wine too, but i taste some lightly sweet barley here too, a toasted note, and an almost allspice thing. its complex as it warms and its quite drinkable for how flavorful it is, but in the canned form it lacks the refinement i want it to have, and im sure its better in the bottle done by the brewery itself. pricey for what it is, but as unique as all the rest of their beer overall. a fun one to find in idaho too, havent seen much italian beer here yet...
Jul 16, 2019

Reviewed by SSS from Canada (QC)

3.32/5  rDev -10.5%
look: 4.5 | smell: 3 | taste: 3.25 | feel: 3.25 | overall: 3.5
A-Clear golden yellow with a fine white head
S-Aroma is reminiscent of a Belgian blonde with musty notes as well as fruity banana notes and ripe fruit
M-Mouth feels light and carbonation is medium
T-Neutral flavour with a subtle malt sweetness coming into play before a very smooth and light bitterness
O- this is a decent Belgian ale in my opinion

Reviewed by Alexc11 from Canada (QC)

Reviewed by safaricook from Netherlands

Rated by Silke_Neryn from Sweden

3.95/5  rDev +6.5%
look: 4 | smell: 4 | taste: 4 | feel: 3.5 | overall: 4
Kindly gifted to me by an Aussie rep (for reviewing purposes) are 5 bottles from a brewery in Italy I have yet to hear of, which is of course surprising given I worked at Plonk! in Canberra a couple years ago (Plonk! having the largest selection of craft beers in Australia). So who are these Birra Baladin peeps? And are they as great as Birra Del Borgo (my current favourite Italian craft brewer)? Thanks to the gift of these bottles I will be able to tell you if they’re good or great... or shit, but judging by a quick glance at their average scores on BeerAdvocate I’m not expecting any shit samples here. On to the beer, Cincin!

A: Presents with an eye-pleasing cloudy goldenrod body and a slightly off-white cappuccino foam head that sits firm at half a centimetre. The head agitates easily from the pour, looks great at 6.5% ABV. 8/10.

S: Spicy Belgian-style yeast brings in some interesting fruit esters - bubblegum upfront, apple and mead characters follow. Aroma lingers on the sweet side with a dash of cardamom/mace spice. Not sure if intentional by Birra Baladin but it conjures up images of a medieval banquet and pageantry... lovely stuff, this is an aroma I could sniff all day. 8/10.

T: Intriguingly not as sweet as one would expect from a Belgian counterpart, quite a balance is found between sweet/dry/spice that signals a brew of a highly adaptable nature. Flavours noted as above: Bubblegum/mead esters, cardamom/mace yeast spice, finishing with a dry white wine vinous note. This brew is uniquely Italian craft, much like Birra Del Borgo, with that merging of beer/wine flavours, nice! 8/10.

M: Mid to light bodied, and the Achilles heel of this brew: carbonation, in that it is far too gassy (I noted about 6-7 burps per bottle). We will forgive it one transgression given how the beer tasted though. 7/10.

D: As good an example of an Italian-Belgian Pale Ale gets IMO. Apart from the gassy nature of this brew there was little to criticize it for: flavourwise it was interesting and tasty, with flavours I enjoy in a beer, aroma = great, appearance = also great... so yeah, looks like there’s a new contender on the horizon for Doc’s favourite Italian craft brewer, although Birra Del Borgo so far are the more creative brewer in my eyes. However I do have 4 more Birra Baladin beers to go, they may still yet wrest that crown! 8/10.

Reviewed by drtth from Pennsylvania

The beer pours out into a Duvel glass a lightly hazed golden yellow color with light orange highlights and a 1 1/2” airy off white head that persists quite well. Sipping creates lots of scattered small patches of foam. The retention is quite good.

The aromas include some touches of citrus (orange zest and or lemon) and some coriander along with hints of the spicy yeast and some almost bready malt character.

The flavors include the coriander and some grassy and herbal bitterness. The coriander character is quite light and blends well with the bready malt. The sweetness from the malt provides a touch of balance to the herbal bitterness and the interplay is balanced without either dominating the other.

The mouth feel is on the light side of medium with a nice touch of prickliness from the gentle, persistent carbonation. The finish begins as the slight sweetness changes to become more dry and bitter. It ends with a dry light herbal and citric bitterness.

This strikes me as being a well made and easily drinkable example of a Belgian Pale Ale and an interpretation I'm definitely enjoying. I regret a bit that I have only one bottle and so don't know when I'll be having it again. The light herbal bitterness is a nice combination of flavors.