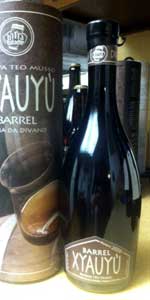 A slow pour yielded almost no tan head; no lace.

BIG rum flavor up front, followed by raisin, oak, leather and then some more rum.

An after dinner sipper, for sure, but you won't forget it. I really like this!

Pours unsurprisingly flat. I get notes of soy sauce, raisin, chocolate, fudge, roast, booze, and prunes. Super deep, rich, and aromatic. Beer opens chocolate, raisin, and fudge. I get sweet soy sauce, brown sugar, and maple, and molasses in the middle. Boozy at the back. Vinous at times with more raisin, fudge, and dried prune. Brown sugar and booze at the finish. Long, lingering, sticky, and sweet and velvety molasses aftertaste. Body is full with no carbonation. I can't express how spot on this feel is despite the lack of bubbles. Really coats the palate and is wam, viscous, and rich going down with a long, lingering, oily aftertaste.

This beer is a perfect expression of the style. Absolutely amazing.

This one, also still, has a merlot sort of look to it--dark red, almost black, with a fluid, silky still surface. It's quite pleasant to look at under the light.

Taste is tobacco, dark red grape, raisin, and lots of fig. It's almost wine like, as it's super smooth, but there's no heat or booze, and it's quite unique with a hard to pinpoint earthiness.

Pouredfrom vintage 2014 bottle at Baladin bar in Bologna into a teku.

This is easily the most unique tasting barleywines I have ever had.

Had the pleasure of trying this one at the Mondiale de la Bière. Looked for Xyauyù while in Europe this past month, but never saw it anywhere.

Loads of malt flavours -- waffle cone, honey, deep caramel, more dark fruit, pleasant undercurrent of tobacco. Sweet but delicious, definitely a slow sipper to enjoy. Not much noticeable hop character at all, which is just fine. Calling this an English barleywine almost seems a bit of a stretch, this is very wine/liqueur-like. Would love to sample it again, delicious.

Look: It pours brown and somewhat cloudy with no head.

Smell: Very strong rich malt aroma with caramel and dark fruit like raisins and plums. The alcohol is quite evident in the nose. There is a port wine like quality and slight molasses as well.

Taste: The flavors are strong with dark caramel, toffee, and deep toast. There are some molasses notes and nuts as well. There is a vinous quality to it with very little hop flavors.

Feel: This is full bodied and chewy with very smooth texture. The alcohol warmth is pleasant with low carbonation.

Overall, this has many malt flavors and the flavor is complex from the beginning to the end.

2013 vintage poured from the bottle at Bir & Fir in Rome. Very good barleywine; worth getting for sure.

Xyauyu was not a good value.
While on the "1001 Beers To Taste Before You Die", I will review it on my next tasting... but will I spring again?

BOTTLE: 500ml. Comes packaged in a cardboard tube redolent of whisk(e)y packaging. Brown glass. 2011. A black wax cap covers the cork. Its removal yields the softest carbontion "plop" of all time. "Lotto L190-199/130." Cost was a wallet-shattering 28.50 euro at a bottle shop in Turin, Italy. Still a better price than I've ever seen stateside...

Expectations are high seeing as this is currently both Beeradvocate and Ratebeer's #1 Beer from Italy. Reviewed live as a rum barrel aged barleywine per Baladin's website (though the label makes no mention of a style aside from "top-fermented beer." Served chilled into stemware.

HEAD: None. No lacing. Like Sam Adams Utopias, it does have that clear patina of a boozy brandy-like sheen when you tilt the glass - and to me that replaces the (lack of) head as a style-appropriate characteristic. What legs!

BODY: Murky. It's brown, but orange hues are exposed when it's backlit (i.e., it's textbook tawny). Semitranslucent. Nontransparent. I see no yeast/lees or sediment within. Dark.

Has more of a liqueur like look than a beer look, but it's generally appealing. I imagine this would get poor marks in a blind tasting.

Its gooey booziness is again suggestive more of a liqueur than a beer; in any case, Italian liqueur and wine-making influence couldn't be more evident - and one should love that Baladin is bringing an Italian flair to the style. In terms of the barleywine style, though, I'm missing the heavy caramel, toffee, and malt-forward presence you'd expect.

No hop character whatsoever here (to style). No overt off-notes.

Aromatic intensity is moderate. I did expect more of a rum-soaked fruit taste than what I'm getting.

TASTE & TEXTURE: Gooey all the way through, with a smooth wet body and low low low carbonation; some might call it flat, but in a beer like this - that goes for a liqueur-like consistency (and nails it) and flavour profile - such low carbonation is apt. Unrefreshing, of course, and definitely syrupy, thick, oily and viscous. Alcohol warmth is obvious, and is amplified by the rum. Some drinkers will find this heat off-putting and distracting from the flavours, but it does play into the rum barrel vibe to an extent.

Malts take a backseat to the dominant fruit notes. Dates, prunes, orange marmalade, a blip of raisin/grape, sugarplum...it's a very liqueur-forward brew, in some ways nodding to rakia and in others nodding to the fruit profile seen in rich Madeira/port dessert wines. A sherry wine sweetness is also obvious. All of which is to say: where the hell is the rum? It doesn't harmonize with the fruit, and aside from adding to the noticeable booziness of the beer, I'm not seeing what it's contributing. The said can be said about the wood barrel, which is so backgrounded and reticent it barely adds any cohesion to the flavour profile.

No hop character here, to style.

Treacle. A subtle hint of leather.

There's a definite marriage of texture to taste; both work together to serve the liqueur schema of the brew. The viscosity of this really emphasizes the gooey fruit notes.

Some compare this to Sam Adams Utopias, and drinking it I can see why. But as boozy as it is, it's far far FAR less drinkable than the very best barleywines; indeed, it seems oddly committed to its alcohol warmth.

I have mixed feelings about this "beer," but ultimately I love that Baladin is doing its own thing. I might buy this again and recork repeatedly to use it as an aperitif or digestif, but it's not the hearty sipper of a barleywine that can be finished in one sitting one might hope for (nor is it a beer I'd want to finish while sitting on the couch, contrary to Teo at Baladin's intent).

Worth trying as a great example of a country bringing its own tradition to beer, but if I wanted a (true) barleywine, I'd sooner spring for a Danish, English, or American example at a third or less of the price.

I appreciate its uniqueness, but I won't be able to finish the bottle by myself. Definitely a beer for sharing, if you're not recorking.