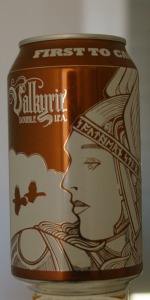 Notes:
View: Beers
Reviews: 38 | Ratings: 264 | Log in to view all ratings and sort
Reviews by ThaneMcC:

At first blush, I was overwhelmed by the citrus and pine heavy hop bomb that this is. . . but as it warms, it a very pleasant sipper. Enjoyed with fattier foods/cheese/bbq - well hidden abv.
Almost a tripel IPA in its intensity.
I rather enjoyed this beer - I'm not a hop head - but I can respect a quality, over hopped beer.

Poured from a 12 oz can into a pint glass. Nice frothy head that laces the glass as you sip. The beer pours a nice copper color. Smell is more pine that citrus. The taste feels off. A little chemical before the palate adjusts. Not a bad double/imperial but not great either.

"Valkyrie Double I.P.A." 12 fl oz aluminum can with brown and white label art acquired earlier today at me local HEB Grocery; they'd just gotten it in a couple days ago. Purchased as part of a 4 pack; I don't recall the price. Reviewed as an imperial IPA because it clearly identifies as a double IPA on the label and in the name. 9.2% ABV confirmed. No best before/bottled on date is listed on the label. Expectations are above average; I'm in the mood for an imperial IPA and I'm pretty new to this brewery's offerings. Reviewed live. Served into an Independence Brewing pilsner glass in me gaff in low altitude Austin, Texas.

Served cold, straight from me fridge. Side-poured with standard vigor as no carbonation issues are anticipated.

A: No bubble show forms as I pour.

Pours a 1.5 finger wide head of light khaki colour. Nice creaminess and thickness. Decent frothiness. Has a smooth even consistency and a somewhat soft complexion. Head retention is quite good for the high ABV - about 6-7 minutes. Even inconsistent lacing coats the sides of the glass as the head slowly recedes.

Body colour isn't your typical imperial IPA colour; it's not a copper - more of an amber. Somewhat dull as well. Murky and nontransparent. Translucent. No yeast particles are visible. Appears adequately carbonated.

Within style conventions. Overall, it's a decent appearance for an imperial IPA but isn't unique or special. Has no obvious flaws. It could certainly appear more inviting, but I'm optimistic.

Sm: Pine is the prominent hop note, with some evergreen needles. Fairly resinous. Somewhat herbal and floral. Sweet bready malts, caramalt, and pale malts. There's some palpable hop bitterness, but it seems mostly concealed by the malty sweetness. I'm not finding any citrusy or nectary hop notes though I do get some tropical fruit - mango, pineapple, passionfruit, maybe tangerine. I'm not sure the hop choices are ideal based on the aroma. The malts seem a bit too caramel-driven.

I don't detect any overt off-flavours or alcohol. No yeast character is detectable.

A generally appealing aroma of average strength. It's neither pleasant nor offensive.

T: Plenty of hop bitterness emerges, and unfortunately goes untamed in the late second act, yielding an unpleasant imbalance. Simultaneously, the malty sweetness is overdone and makes the beer too sweet in the early second act.

Way too much caramalt. Sweet bready malts. Pale malts. It's not cloying, but it's way too sweet. I get some dull vanilla as well, which really doesn't work in an imperial IPA.

Pine is the main hop note, with some earthy, herbal, and floral notes in there as well in addition to tropical fruit notes: pineapple (a flavour that I personally distaste in beer), mango, and maybe passionfruit. It's got all the bitterness of grapefruit, but none of the citrusy juicy flavour. Some pith. The hops they chose for this beer do not perform well here.

It's got some limited complexity, but no subtlety or nuance. Subpar depth of flavour. Average flavour duration and intensity. I really wish it were more balanced. I do like the resinous notes, but overall it's a mediocre imperial IPA.

No yeast character or alcohol comes through.

Mf: Unrefreshing. Smooth and wet. Lightly oily. Has some light tea-like astringency, to its detriment. Overcarbonated. Medium-bodied. A bit too thick for the style. I'd like more of a light feel. It has a strange presence on the palate - too full and thick and overbearing for its lack of diversity of flavour.

Not harsh, boozy, hot, or gushed.

Dr: The lack of balance here is what really kills it for me, but the build isn't great to begin with - there's way too much caramalt and pineapple here. I'd honestly just start over with a new recipe - new hops, new malts. While it does a decent job of hiding its ABV, it doesn't do well at providing a welcoming approachable flavour profile. As a result, the remaining 3 cans will take me some time to come around to. A mediocre attempt at an imperial IPA from Southern Star. I wouldn't get this again or recommend it to friends. It's drinkable but underwhelming. There's a myriad of better beers in this style out there, at or below this price point to boot. You've got to bring more to the table if you want to run with the big dogs.

An imperial IPA is about balance; having higher IBUs or hop content does not make your beer better or more manly. I'd like to see this American trend of recklessly dumping in hops as a sort of dicksizing competition with other breweries evaporate.

Poured from a bottle: 1 Pint, 0.9 fluid ounces. Appearance is amber to orange in color, cloudy with floaters, decent head that laces the glass through a few sips. Aroma is nice but the taste is hard to figure out and at first seems beyond bitter to chemical/astringent, and then my palate seemed to adjust a little improving satisfaction. I'm a fan of IPA's and this one falls in the middle of it ... better than most I've brewed but room for improvement.

Served in a snifter.

Love the bottle art on this beer! I like the look of the beer itself just as well, glowing dark amber with some honey highlights. A finger's worth of bone white foam, however, it recedes very quickly down the glass, a spackling of lacing left behind.

Flowery esters dominate this beer's bouquet, a little bit of honey and apricot are a nice touch. A boozy quality and a bit of diacetyl also seeps through, luckily, it does not detract from the overall nose.

Bitter aspirin hits the palate hard, and then the bitterness just runs all over everything. You want a bitter IPA? You have your wish with this one! The other flavors do not resemble the nose at all. Earthy tones, a little grassiness, and a wee bit of wheaty malt, this is mainly all felt in the finish as that aspirin bitterness really makes up most of the proceedings.

Valkyrie has a decent feel, good creaminess and a light to medium heft. Of course, it finishes dry, thanks to the aspirin flavor that just will not go away.

Valkyrie certainly does not mess around. And if truth be told, I will not be joining this beer on the journey to Valhalla. The aspirin palate and unbalanced bitterness have me hoping I get to live to fight another day.