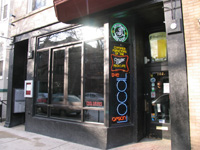 Perennial Abraxas variants on tap the night before FOBAB? I'm in. But, wait, should I be?

**Never again at this place!**

We got to the bar at 3:00 and snagged a table. We had a bowl of decent guacamole and a bunch of beers as the place filled up. Once it got slammed, the service was horrible, but it was decent until an hour or so before the tapping.

A server stopped by and we asked about the tapping around 5. He said "no worries, we're pro's at this - we'll make sure you get the beers! No pre-orders but we'll be by to make sure people like you who have been here for hours get served."

We don't bug him. Why would we? He's assured us we'll get the beer and I'm not sweating it, since they're pro's at special releases.

At 6:00 the beer is tapped. We've been there for three hours, since there were 20 people in the bar. Could have grabbed a bar stool or gotten in line at any point. The server comes by and says "I'll be right back to get your order".

At 6:05 he tells us "I can't get you the Perennial Abraxas beers. They're pouring from the bar and not for table service. Sorry."

Biggest "Oh no you didn't" moment of my beer drinking career. I had to leave my table and fight tooth and nail through a line of bearded beer geeks and beer farts to luckily get a pour of each variant. The idiots at the bar were pouring, serving and taking cash - duh, "pros" - have one guy doing nothing but pouring. One doing nothing but handing empty glasses and taking back full ones. And the three servers standing to the right of the bar picking their asses as the melee goes on infront of them - why not let them dole out the brews?

Look, I have no problem with a bar handling a release/tapping any way they want. This was a cluster, and self-created. I'm patient. I could have had my beer at 6:30 if I was guaranteed to get one. Never bugged the server. But a heads-up and decent info would have been great. I'll never go to this place again because they obviously don't know what they're doing. Anything but pro's.

Should be called "worst option".

this is a weird one, usually i only review places that are breweries, but this sort of skirts the line. see, it is a brewery, as in the have a whole range of house beers that are under the local option label, but they arent brewed in house. not sure if someone from here oversees brewing operations and its just made off site or what, but this is their taproom, a really no frills beer bar, kind of punk rock dive vibe to it, chalkboard beer menu, and a killer bottle list. its smaller than expected in here, as much a hallway as a bar, which i like. mellow energy here, kind of dated, not full of beer nerds carrying on about this or that, but with a list to satisfy literally the most adventurous and discerning of tastes. they have a cool range of their own beers, brewed somewhere else but i dont know where, very little information available it seems, but the ones they make are great, and i have been enjoying them for years. some cool collaborations too, looks like they have spread their wings pretty well. the bottle list blew me away, fairly priced lambics and wilds and beers of all persuasions. attentive low key service, a diverse food menu but i didnt eat, and just chill vibes all around. a neat place to drink some next level beers when you are in chicago. id like to know more about their brewery side, sounds like a sort of gypsy brewery set up, however its arranged, the beer is awesome.

I love this place. It can be off putting if you don't like metal and the dive bar feeling this place puts off. They have a few house brews and several from others, most of which I'd never seen or would even be able to get my hands on. They dropped a case of Canadian breakfast stout right in my face, then poured me a glass. The bartenders were awesome and engaging. Told us about a great pizza place right down the street. Maybe not the best place to take the family, but a great place to hang with your dudes.

Local option is a decent place to try great craft beers. Good music and good vibe. Definitely on the pricier side though. What you see is what you get here. Don't know if I'd go regularly but if you're in Lincoln Park and need a break from all the BIG 10 douchebag bars this is a good spot.

I loved this place and wondered why I went anywhere else in Chicago. Great selection of outstanding brews. Super knowledgeable and friendly staff. If you can hang with bearded dudes and doom metal, this is your spot. (Did not eat food there.)

I find the dark, goth-y ambience offputting, but their beer selection is magnificent. One of the three or four best multi-taps in Chicago, in my opinion.

Were it not for the attitude-laden folks behind this place, this would be one of my favorite beer jawns of all time. It is a metal bar with premium beer near a Catholic university. How cool is that?

Listen to black metal while sipping on rare brews from Three Floyds, Surly, Half Acre and, of course and most of all, Local Option. Of the 19 taps, 8 are Local Option and 4 are FFF. The chalkboard has no descriptions or prices, and the unfriendly bartenders have no patience or will to explain and guide you through the menu. So do your homework and check BeerAdvocate before ordering.

8 bucks per snifter of Total Option brews is a lil' high but worth trying.