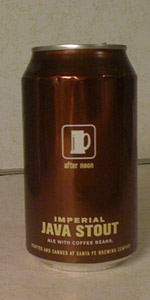 Near black with two fingers of thick mocha-colored head that leaves heavy lacing. Strong roasted coffee aroma, with some nuttiness, a little chocolate and a touch of cream. Heavy, lush, viscous mouthfeel that's surprisingly creamy and only somewhat cut by carbonation. Bigger chocolate and sweet cream flavors in the taste than expected -- huge really -- with the coffee taking a backseat until the aftertaste, where it lingers. Very, very tasty.

CAN you dig it, SUCKA! Pours brown out the can, mild beige head about 3/4" deep. Aroma was magnificently coffee. They really knocked that out the park. No acridity, acidity or bitterness in the aroma.

Great taste, again, the bitter adjectives are not amongst this beer, yet the immense coffee ones are. Amazing mouthfeel to completely cover up the 8% abv, can't believe this. Its like they even had the perfect amount of creamer (lactose?) in it where you can't smell it or really taste it, but it just gives it a better mouthfeel than oats would probably do or maybe are there in tandem. Good carbonation, even if its too high for you, you can just let it chill for a few minutes and its adjusted to your likings mr. cask guy from britain. All the chocolate is very dry and never sweet.

Just a bang up job they did on this. Expand distribution!!

So many coffee stouts fail to give a potent coffee flavor. This one gives a strong espresso feel. If you like coffee and beer, this is the beer for you.

Poured into a fourteen-ounce tulip out of a twelve-ounce can that is (as is standard with Santa Fe Brewing) very simply and sleekly decorated. The result of the initial pour: a massive, sudsy mushroom-cloud of head, milky-khaki and oddly pitted or clumpy, but generally impressive and requiring two distinct pours from the can. The depletion is surprisingly fairly quick—down to a thin, eighth-inch creamy ring—but the lacing is sticky and pervasive down the tulip's rotund edges.

A bit of a metallic, aseptic, "off" quality dominates the faintest of café odors across what is, overall, a very limited and initially listless nose; as the stout airs, a little more coffee (and a little less "clouds taste metallic" defect) is detectable from atop the ale.

From the first sip, it becomes apparent that some of the coppery "off" notes are likely not "defects" but aspects of this stout—either derived from the coffees blended into the beer, as I find most likely, or from the "earthy British hops" or deep roasting of the malts. (It may also have arisen, in part, from some undesirable aging, as this beer is listed as a "winter" seasonal, and I purchased my six-pack on 18 August.) Irrespective of the source, these less-pleasant characteristics—as with the nose—subside after exposure to atmosphere, though never entirely departing.

Aside from these metallic impressions, the main melody of this beer is "bitter": coffee bitters, burnt-grain bitters, and herbaceous, damp forest-detritus (but pine-absent) hop-bitters all swirl throughout the creamy (but on the thinner side, for a stout) body of this stout. This decision definitely delegates a lot of bite to each sip, and likewise buries the alcohol behind a storm of various palate-smacking bitters, both subtle and pronounced, both dark and deep and grassy and gritty. However, while there is some good, nicely-restrained residual sugar allotted by the malts, the coffee and the multi-faceted hopping unfortunately don't provide much beyond the aforementioned—and, true to the patter's promise, complex—bittering.

Ultimately, I'd like to try this effort again, ideally a little geographically nearer and a lot temporally closer to the source. But even if the sniffing-a-nickel, sucking-on-a-penny characteristics *were* to be defects (either of canning or aging), I'm nevertheless skeptical I'd raise my score all too much: while Santa Fe's Imperial Java Stout is much too richly and variably bitter to be called "one-note," its very much "one-chord": many notes, but all firmly residing in a single register; complex, but in a narrow way; good at one thing, but all too reliant on only that thing.

Bought this one consistently this past winter so I guess it's a proper time to rate it! Pours like a stout should, nice dark dark brown, not quite black, with a finger of head. Watching the pour it looks like a medium viscosity. Smells gorgeous, a sweet iced coffee smell with a bit of booziness, I would wear it as a cologne if available. Tastes great too, extremely balanced with a lovely creamy mouthfeel. I usually only drink stouts in the colder months, October-March maybe, but like this one so much decided to pick up just a can right now in May. This really is a great beer and this winter when I discovered it was a favorite of mine. I keep coming back to it and am very glad I took a chance on it. Could be one of my "signature" beers that I drink. Very highly recommend this one!

S - Lots of dark chocolate and Espresso/coffee on the nose.

T - Dark chocolate and coffee beans from start to finish with a little bit of char, deep roasted malt

12 ounce can that one of my friends gave to me. No date that I can find on it. Served in a snifter, the beer pours dark brown/black with almost an inch tan head that stayed around for a bit. There's also a small amount of lacing. Aroma is nice, the brew smells mostly like coffee but there's also some burnt/charred malt, caramel and some bittersweet chocolate noticeable. For the most part I think the taste is pretty much like the aroma, but there's also some vanilla flavor. Mouthfeel/body is medium, it's smooth and easy to drink with a moderate amount of carbonation. I thought this was a good coffee stout. Glad I got to try it, but also disappointed I won't get to try this again soon since Santa Fe Brewing doesn't distribute here. Definitely worth picking up if you come across some!

Nose: more hops than expected, matched in strength by coffee, with dark malts more in the background.

Flavor: mild-moderate bitterness until the moderately bitter finish and aftertaste. Good balance of hops, malts and coffee. Lot of coffee in the aftertaste. Some very dark roast flavor but only a hint of char.

Feel: carbonated is a bit more lively than expected, but works well; smooth; medium-full body. The ABV is well hidden.

F-medium to full body with moderate carbonation, smooth and creamy

O-nice flavor and body in this stout, could drink a lot of these

I had this a couple of years ago and really liked it had it at 4.09. Not sure if it is the can or my taste but I'm dropping my score. The bitterness and carbonation seem overdone for a stout.

Poured from the can into a large snifter glass.

Mild notes of piping drip coffee. Good sense of cream and thick milk action a bit, with toned down sweetness. Hints of peanut butter and nut a little as well in the mix, and an almost black licorice quality to is as well. Kind of fun and pretty solid.

Palate seems to come as expected. Mild creamed coffee but with not much roast character. Borderline amped milk stout sweetness but far more bitter and with much more body. Mild roasting finish with a bit of hop oil bitterness on the aftertaste. Warmth brings some mild milk chocolate character as well with the coffee angle disappearing quite a bit. Very faint hints of metals slightly.

Overall a fairly tasty stout, but seems to loose it's coffee appeal after a bit and goes into milkier territory. Still comes off though as very well made regardless.

Poured from a 12 oz can into a snifter. This pours a pitch black color with a finger thick mocha head which quickly dissipates. There is some coffee in the smells, nice espresso, some dark roasted malts, not much hop aroma, the alcohol is well hidden. The feel is thick and creamy, mid carbonation. The taste is pretty good, nice amounts of roasted malts, dark chocolate, and espresso. Nice.

Pours an extremely dark brown color with hazelnut highlights. Head is a 1/4 inch and is tan/milk chocolate in color. Head retention is above average and lacing is good.

Smell is of strong, roasted coffee/espresso. Sweet caramel malts come through next followed by more bitter coffee. Hops and alcohol are pretty much non present here, the aromas are all about coffee.

Taste is very similar to smell, dark roasted strong coffee mixed with a typical stout. Chalky, Biscuit malts are also there but the coffee really shines in this beer. Bitterness from coffee paired with the hops does a nice job to contrast the rich dark malts. Alcohol is not really detected.

Mouthfeel is a bit light for an imperial stout and strongly carbonated. Body was very smooth though on the lighter side. Head contributed some cappuccino frothiness for about half the beer.

Overall this beer is a total coffee bomb and I love it. My favorite style is Coffee stout and this brew is definitely on the heavy side of coffee flavoring. Only downsides to this beer were that it was a bit too thin to be classified as a imperial stout and I would have liked to taste some different flavors like chocolate,vanilla, smoke etc to complement the onslaught of java. That being said at 8 bucks for a six pack, this beer is a steal and shall become a staple in my fridge.