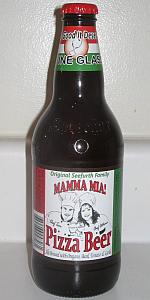 Notes: From the website: Pizza Beer is a debris free product. The Margarita pizza is put into the mash & steeped like a tea bag. A whole wheat crust made with water, flour & yeast is topped with tomato, oregano, basil & garlic. The essence of the pizza spices is washed off with hot water and filtered into a brewpot, where it is boiled for a long, long time. During the process, we add hops & spices in a cheesecloth type bag & filter the cooled liquid into a fermentation vessel. (big glass 6 gallon water jug). After a week or two, the beer is good to go. Keg it or bottle it.
View: Beers
Reviews: 166 | Ratings: 320 | Log in to view all ratings and sort
Reviews by avisong:

So my review is back when Sprecher used to make this beer, so if that means a lot to you, I dunno, maybe you disregard, maybe you pay extra close attention because you are doing some historical or anthropological paper and here you are with your research.

It looks like your standard beer, yellow in color, white head, 1/4" goes away maybe a little quicker. Nothing about it says pizza. Now the smell, that actually captures some italian seasoning and tomatoes. I mean, I'm ntot going to dock this points because it smells like it is intended to. In fact, props yo.

Taste, hey, it tastes like pizza. It has a weird way of not letting you go. I drank the entire 16oz of this, and while it is far from my favorite, I mean seriously, there's been over 100 beers I can't drink that much of, so this was nowhere near as bad as its rating or some of the other garbage I've come across in my time.

So much oregano, tomato, bread. I think everyone should try this because its unique and shit, Dogfish Head puts shit like this out all the time and charge you $12 for a bottle of it.

Bottle generously shared by nickd717. Thanks Nick, I've been wanting to try this beer for a long time.

Clear and golden in the glass, the color of a lightly browned pizza crust. The head crackles away quickly, like pouring soda into a glass. Looks surprisingly like a normal beer, until...

The aroma is a stomach-churning combination of garlic, oregano, basil, marinara sauce and putrefaction. When ice-cold it smells like a pizza that's been sitting out on the kitchen counter for a few days, but warmer temperatures and vigorous swirling reveal the vomit-inducing stench of decay and pale malt. This might be the worst thing I've ever smelled in my life, and I would give this a negative 5 in aroma if I could. Given that I can only give it a 1, I'm going to have to dock other scores.

The taste, while still utterly horrific, isn't quite on the same nausea-inducing level as the aroma. It tastes largely like pizza crust and herbs that have been soaking in a stale, sun-kissed bottle of Miller High Life. The body is watery and thin and there's a surprising buttery diacetyl presence that, when combined with the strong garlic flavor, makes me think of garlic bitter. As delicious as that sounds, it has no place in beer.

In summary, this is surely one of the worst beverages I've ever tasted. In that sense, it totally lived up to my expectations, possibly even surpassed them. I feel bad for anyone that actually spent money on this beer, though.

Is it a beer I'm going to go out and buy all the time? Probably not. Did they hit the nail on the head with a beer that tastes like pizza? Absolutely.

A: Deep gold - almost orange in color. Very cloudy. Frothy carbonation that clings to the sides of the glass.

S: It smells just like pizza - I didn't expect that. Tomato, basil, garlicy... well, it's like sticking your nose in a pizza.

T: This beer really does taste like pizza sauce - it's not a gimmick, which surprised me. Garlic, tomato and marinara overtones. The only thing missing is cheese and pepperoni.

M: bubbly carbonation, not as thick as it looks.

O: I was surprised how much this actually smells and tastes like pizza sauce. It's a novel idea and quite good, but I'm not sure if I'd want to drink it very often... it's a little confusing to drink a pizza - I'd almost rather just cut to the chase and eat a piece of real pizza and drink a wheat beer to compliment it.

had thanks to user ufmj, thanksa bunch man,
poured from bottle into snifter
A -cloudy amberish, large white head that stays for a while
S - well it smeels like a pizza, tomato sauce, spices etc
T - weird... it tastes a lot like the nose, very tomato sauce-y not as bad as I expected, but not great
M - very thin and weak, honestly the worst part of the beer
O - not as bad as I expected, very weird beer, and very unique

P: 16 fl oz bottle in to an imperial pint

A: SRM is golden yellow with a slightly red tinge. Lots of sediment floating around. Translucent. Heavy carbonation. Light lacing.

T: Light herbs, garlic, pizza dough, tomato sauce, and mozzarella cheeze. It's like I'm taking a bite of pizza, chewing it up, taking a big chug of lite, flavorless beer, and then swallowing the whole thing. Watery taste. Aftertaste is of pizza.

M: Light body. Herbs and other ingredients give a mf akin to food. Overall, beer is very watery.

O: Not the worst beer I have ever had, but very close. Maybe this was a cool idea to whomever thought this up, but the execution of this idea is lacking to say the least. The one good thing about this beer is that it does smell like pizza, and that's kinda cool. Otherwise, not good. The beer is not appealing to look at, the taste is like watered down pizza, and beer should not taste like mozzarella cheeze and tomato sauce. The mouthfeel was of a BMC beer. Please do not make any more of this beer.