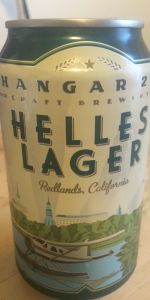 Pours a clear gold, a little darker than expected, with a white head that dissipates completely. Disappointing start. Smells decent enough; Noble spicy and earthy hops, mild sweet biscuit. Flavor is much the same, very balanced, light feeling along with a dry finish. Overall, this is a pretty good US interpretation of a classic Helles, and easy enough to enjoy over the hot summer months. Prost!

Although the idea behind a Helles Lager is that it’s “lighter” than other German lager styles, this one is perhaps a bit too light. The lack of a malt backbone allows biscuity flavors to dominate and leave the palate with an unpleasant tannic linger. No distinct hop character either. Basically, it’s missing the trademarks of this classic German style.

Appearance: Pours slightly hazy, the liquid a goldenstraw color; not much of a head though there are some clumps of foam that stick

Taste: Bready and slightly grassy, up front, with an underlying, though subtle, sweetness

Pint at Gourmet Pizza Shoppe in Redlands for five dollars on 11/2/08, reviewed from notes

A-Bright light golden yellow color, could see right through it one inch white soapy head that lasted a few minutes, some retention, not much lacing
S-Grassy accents, faint hoppiness, bready malt aromas, lemon juice, lots of yeast, a small amountt of skunkiness, and whole grains
T-This brew starts off more grassy than anyhting else, nice toasted bready malt and biscuit flavor in the middle, very faint hints of citrus and dryer hops in the finish, gets slightly sweeter as it warms but mostly crisp malt the whole way through, very light feel and taste though, this one is geared towards consumption rather than flavor, still not bad overall
M-Crisp, toasty, and slightly dry mouthfeel, thin bodied, tons of carbonation that almost makes it feel watered down, taste does not linger long but can be refreshing
D-Could drink a lot of this, would make a decent session beer, ABV is super low and you can detect that, would be good when it is hot in the summer out in the Inland Empire

I have had this one before and I was not impressed the first time but I gave it another try anyways, it was a mistake drinking this after the Alt because it was just a letdown, this is the weakest brew from this brewery in my experience, probably would skip next time if their others were being offered, this worth trying and above average for its style

On-tap at Charlie Jewell's in Redlands, and as a bonus, I killed the keg and got the beer for free. On to the beer:

Paler than your usual helles lager. Straw yellow color, ever paler than that. The head is creamy and white on top and leaves good lacing in the glass. The aroma was sweet and grassy in small quanitites. The taste followed the same direction as the aroma. It's light and smooth on the palate. Notes of wood shavings on the palate with the grassy and pale malt sweetness. Refreshing.

Helles lager, Inland Empire style. Not quite a light beer, but lighter than usual. This would be ideal for the 100F summers that commonly hit the Inland Empire.

A: The beer pours a slightly hazed golden straw color with a couple fingers of white head on top.

S: Smells somewhat sweet with quite a lot of lager yeast on the aroma. Pale malts and light breadiness with just a hint of corn to it. There is a nice hint of floral hops and some straw and grass in the background.

T: Flavors are clean and simple and there is quite a nice bready sweetness to the beer. Pale malts interact nicely with the light and crisp hop flavors. Just a touch of corn and a very mild bitterness on the finish.

M: Medium in body, definitely fuller than your average helles, with a moderate carbonation.

O: Not sure why this one is getting such low marks, but I found this to be a great beer and one of the better light American brewed lagers I've had.

Update a year after first review: listed at 5.2% at Tiger! Tiger! in San Diego. Makes me think of a Kolsch right off. Just enough bit of the hops. Pleasant malty touch. Foams up a nice frothy line every time you sip. Served in a tall half-litre Stiegl glass.

09-22-2010: Light golden color typical of lagers. Head dissipates rapidly. Nice touch of hops, but only a touch. Flavors are thin and crisp with a hint of malt. Faint resiny flavor. All of the tastes kind of evaporate, leaving a bit of dishwater in the mouth and barely any bitterness. Still, pleasant enough for a gulp but not very interesting.

I don't get any sense of German style with this, but what's in a name?

Apearance - Pours a crystal clear straw yellow with no head.

Mouthfeel- Thin and low on carbonation

Overall- Very uninteresting, I will not be trying this again anytime soon.

This pours a golden tan in color. Lightly lager aroma. Muted hops. Drinks smoothly with a slight floral character.
Poured from a can. No bottle date.

App- A pretty standard pour. It was a very clear yellow with a decent amount of bubbles. Maybe a 1/4" of head. No cling or lace.

Smell- It was nice and crisp. Had a none of the biting lager notes. It had a good earthy note but wasn't buttery.

Taste- Pretty standard Lager. Wasnt overly butterly like most are. Had a crisp malty note with a good earthy note.

Drink- Pretty average beer. In offensive for a lager, not sure I'd have again

On tap at Father's Office in Culver City, CA.

Pours a clear light yellow color with a 1 inch white head that fades to a film on the top of the beer. Random streaks of foam form on the glass on the drink down. Smells of sweet malt and citrus notes. Taste is also of sweet malt and citrus flavors. This beer has good carbonation with a crisp and clean mouthfeel. Overall, this is a pretty good lager that is very easy to drink. It washed the burger I ordered down very nicely.