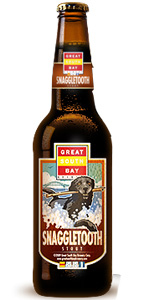 Notes: Like its namesake, this beer is something you could get tangled up in. Brewed year-round and especially popular during the colder months, this beer combines unique ingredients including roasted chocolate malt, flaked oats, cinnamon, licorice root and Long Island apples . . culminating in a savory full-bodied malty goodness, and finishing with a hardy bite.
View: Beers | Place Reviews
Reviews: 15 | Ratings: 73 | Log in to view all ratings and sort
Reviews by mikeg67:

Poured a deep black hue with a one and a half finger frothy tan head. There was very good retention and lacing.

The taste consisted of a form roasted malt with a soft lactose sweetness and touch of licorice spice.

Overall a complex and flavorful stout.

Had on tap at Bellport Beer tasting, I'll say right up front this beer was really really good. Wonderful aromas of dark chocolate and toasted oats. Big and malty, bittersweet, and a kiss of hops, with a bit of cinnamon rounded this beer out. The brewer said there was even Long Island apples thrown in the mix. Wow, I cannot wait to get this again. This new brewery is going to have a lot of fans.

Didn't realize I reviewed this beer (from growler) before but here goes my draught version.

A pours a pitch black color with a tight tan head leaving some nice lacing.

The aroma is of roasted malt, wet wood and some chocolate. A nice aroma but not all that strong.

This stout has some nice flavor. Big chocolate flavor, nice roasted malt, some ash, a bit o meat and scorched caramel. Large flavors and props for being a respectable 6.5%ABV.

Moderate feel a bit light for the style. Tingly carbonation. Starts sweet but finishes with a roasty bitterness.

A: The beer is jet black in color. It poured with a half finger high dark tan colored head that died down, leaving a collar around the edge of the glass and a small patch of bubbles in the center.
S: Light to moderate aromas of chocolate malts are present in the nose.
T: The taste is similar to the smell, but has stronger flavors of chocolate malts and is more complex with notes of roasted malts and hints of apples and licorice. No alcohol is perceptible.
M: It feels a bit more than medium-bodied on the palate with a slight amount of smoothness and has a moderate amount of carbonation.
O: This beer is much more flavorful and fuller in body compared to other beers in the style.

Pours a nice roasted black color with a short mocha head that continues for quite a bit throughout. The nose is dark chocolate and cocoa powder along with some lightly-roasted malt. The taste is a bit one-dimensional with some chocolate character. It's pretty nice, there's just not much going on. The feel is nice and full with really nice carbonation. Drinks quite well and is a solid offering from them. Glad I got to try this.

Having tried (with great appreciation) a number of "chocolate " stouts this is one of the least chocolate of all...but wait...that works in it's favor.

This has THE most serious espresso flavor of the whole bunch. So much so that I'm thinking I'll be cleaning my apartment, once I leave here (Yes...I don't live here, thank you) until the wee hours. To set the records straight...My apartment does need a through cleaning. Thank you, Great South Bay.

Stimulants aside this has a very well balanced palate with a very pleasant mouth feel. 8.2% on the ABV makes it a perfect after dinner quaff (or brunch accompaniment.)

Had on tap at the Lark in East Northport, served in a tulip glass.

Look: black with dark brown around the edges. The head is thin, slightly brown and doesn't stick around for very long. There's not a whole lot of lacing left around.

Smell: serious amount of roasted barley, dark chocolate and roasted coffee. The website says its brewed with cinnamon and apples but I don't pick up either in the smell.

Taste: a little on the thin side in terms of flavor. Roasted barley, dark chocolate and roasted coffee come out following the nose, but again I wouldn't know the apples and cinnamon were there if I wasn't told that they were.

Overall, a decent beer. Its flavorful but its missing some things you might want to look for in an Imperial stout, like alcohol and some dark fruity flavors. Its a great effort from a new, emerging brewery and they definitely have promise. I would give this a try if I saw it on tap but don't think I'd seek it out.

A - Dark soy sauce brown. Head is taffy beige. Some like half butterscotch half mocca. Can't see lacing since it's a growler.

S - licorice. Chocolate beans. Some roots and herbs. One of the brewers listed off five or so ingredients, but now I can't recall.

T - Initially sweet the dominant flavor is a bitter earthy aftertaste. Not unpleasant but for all the effort but into different hops and flavorings the complexity doesn't come out so much. It contains oatmeal yet it isn't an oatmeal stout. Lacks some definition.

D - This is an American stout. In that it's defining characteristics are not so clear. Like our country it is a melting pot of flavors and ideas. This kind of spice that kind of hop. It's a bit of a stew. Pleasant. Filling. A good mixture of stuff.

this one recently hit the bottling line and then shelves so wanted to check in and see how the bottles are...enjoyed from a bay fest taster pint.

a - brew poured a deep jet black with a thin grey white head that was gone relatively quick leaving nothing more than a ring of head on the surface. swirling the glass brought things back to life momentarily but lacing was non-existent since the beer is so slippery and oily on the glass.

t/m - taste matches the nose...but with a bit of oat for fullness. very much like a roasted chocolate infused oatmeal stout, but just a bit thinner than an oatmeal stout. easy drinking and on the lighter end of the stout spectrum while staying away from the char of a porter.

I had a growler from Swiftway Beer & Soda.

A: Poured Snaggletooth into a pint glass. It's black, with a thick coffee colored head that leaves some lacing.

T: Lots of roasted malt, big mocha flavor. Right on for an American Stout. As an aside; the brewer's description mentions licorice, cinnamon, and local apples. I didn't taste any of these. Still a good stout.

M: A little watery, too light in body for a stout.

D: Good enough to have several. Snaggletooth falls somewhere between a standard stout and an Imp. stout at ~6.5%abv. I barely noticed the alcohol.

How stoked was I to find this on nitro-tap at Beer City for the GSB tasting.

A - Pours midnight black. A bubbly mocha foam rests on top. No lacing at all.

S - Smells very chocolatey. A scent of coffee as well (just like Dunkin Donuts coffee). And aroma of roasted malts.

T - This is why we need to support our local breweries! This tastes as good as many of the big stouts in the top 100. Very smoky, with flavors of cocoa and coffee. An extremely complex stout that has a roasted malt overload. Nice!

M - A little astingent at the end, but otherwise smooth and as enjoyable as a nice cigar.

O - I think this is a very good stout, and probably my favorite from Great South Bay. I'll be drinking this again.