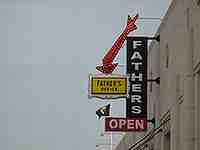 View: Place Reviews
Reviews: 33 | Ratings: 62 | Log in to view all ratings and sort
Reviews by santig0nzalez:

This Father's Office is located in Helms Bakery District in Culver City. It was once the home of Helms Bakery but now is a collection of stores and eateries.

It's been a very long time since I visited the Santa Monica location, but this place seems larger albeit "skinny" in design. There's a long bar with plenty of tables inside and outside on the patio. The interior was well done. The tap list is quite extensive. I had a glass of Russian River Perdition.

It's only a block away from the Culver City Blue Expo line so that's a plus. This is a quality craft beer establishment to visit regardless if you're a local or a visitor. Cool place.

Had their famous burger and enjoyed some amazing beers including one of my favorite from out West, Big Sky Moose Drool. This was a bit of a bright spot during my trip to L.A. Definitely worth swinging through for both food and craft beer selection.

Pros: Best burgers I have ever tasted and big selection of beers.

Still, this is the no1 place to visit when in LA.

Great selection but very high prices. My friends assure me the food used to be top-notch but honestly I wasn't much impressed by it. That said, service (bar only) was friendly and knowledgeable and drinks were good.

Along with one of the city's best burgers, Father's Office (Santa Monica location) is simply one of the city's best beer bars too. Great local beer selection, great food and knowledgeable staff cancel out the fairly small confines -- which you'll gladly embrace within minutes. If you're in L.A., it's a must-stop (and proximity to Santa Monica State Beach doesn't hurt either).

The burger is world class and the selection is amazing as well.

Labels and hype are probably the worst things that can happen to a restaurant and it was indeed what initially stirred me away from this establishment.

My friend introduced this place to me as a "gourmet burger" place, and asked me if I was into "gourmet burgers." Having been displaced to the east coast where every restaurant seems to market or label their flagship burgers as "gourmet" Father's Office's initial appeal was a little... underwhelming. He also finished his introduction by saying that the place also had a good selection of craft beer, so I figured it couldn't hurt just stopping by for a quick drink.

It wasn't really long until I figured out why this establishment is called "Father's Office." Remember being 12 years old and sneaking into your dad's study because you were strictly forbidden from entering, and the moment you entered everything was so mystical and wondrous because they were all so new to you and everything seemed to have a sense of majesty to it? And then twelve years later after you grew up, you'd revel in joy and nostalgia because you found a shop that sells that really expensive pen that your dad used to use, or the crystal decanter that he'd pour his whisky into while smoking out of his mahogany pipe?

But if I did have such memories, Father's Office would be a spot-on reification of such an experience. If I'm not mistaken, Chef Sang Yoon's vision for his restaurant is, like the proverbial Father's Office, is to discreetly educate and introduce the public to his idea of fine dining and there are many clues at his establishment that stand as a testament to this vision. His rotating and expansive draft collection, while it houses your everyday favorites, also includes among the finest of America's microbrews, starting from California's Pliny the Elder to Maine's Allagash White. The Scotch at this joint, while at first glance simply house familiar everyday brands such as your Laphroaigs and Macallans, upon second glance you'll notice that all the scotch being served at this establishment is from INDEPENDENT BOTTLERS and most of them are CASK STRENGTH. Upon third glance you may also notice that they carry an Independent Bottling of 1982 PORT ELLEN, albeit for 50 dollars a glass, and if you're an avid Scotch drinker like myself you would probably stop reading this review at this point and book your next flight to L.A.

A great place for bite, an even better place for a drink.