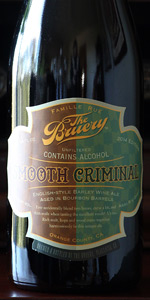 Notes: Ever accidentally blend two brews, curse a bit, and then smile when tasting the excellent result? Us too. Smooth Criminal is the splendid result of moving a bit too quickly in the brewhouse. An accidental addition of Saison De Lente to a fermenter full of our Anniversary ale led us to ask, "Anni, are you okay?" She was. Smooth Criminal showcases rich malt, flavorful hops and oaky goodness in a harmoniously unique ale.
View: Beers | Place Reviews
Reviews: 26 | Ratings: 282 | Log in to view all ratings and sort
Reviews by SirElton:

First of all, good on the Bruery for owning up to their mistake on this accidental brew. I enjoy their anniversary ales so this sounded like a happy mistake that I wished to partake in...

750ml poured into a snifter. The brew appears mahogany in color with aquick dissolving tan cap.

The nose is loaded with bourbon and oak. Scents sweet like caramel, vanilla and a contrasting touch of tangy alcohol blending with raisony fruit. The taste is oaky bourbon, vanilla, caramel and some herbal notes. A big alcohol warmth leading to fruity raison and molasses.

This is medium to full bodied with light carbonation. Basically, this beer took everything I like about the Bruery anniversary ales and ruined it. Instead of being a huge, boozy sweet sipper, the saison has somewhat dried this out, watered it down and even though the alcohol has been lowered, it tastes hotter and more boozy than its bigger component pre-blended. Not a fan but maybe with age my opinion will change.

A - Muddy brown in color, Smooth Criminal pours with a slightly unattractive appearance and lack of clarity but it's nicely formed off-white head sticks around longer than anticipated for it's high alcohol content.

S - A familiar and potent aroma greets the nose with haste; typical Bruery bourbon barrel-aged beer. It's heavy bourbon warmth, thick vanilla, and undertones of charred oak are all too common but the rich maltiness beneath brings out wonderful complexities of bread and Fig Newton filling with the sweet-smelling likes of caramel and toffee.

T - Soft suggestions of the accidental blending of Saison De Lente peek through with just a small pinch of lemony tartness but the huge malty base of the beer overwhelms with bold caramel and toffee sweetness with dark stone fruits pulling through behind. There is, of course, plenty of bourbon barrel character in the flavor ranging from the complimentary vanilla notes to warming booze and charred oak, bundling the whole beer up in a nice little package.

M - Big and boozy, Smooth Criminal might have a robust, creamy texture but, the its bold body thins out slightly with the warming, high octane finish of 15% and bourbon warmth!

O - So The Bruery's accidental Smooth Criminal blending might not have much Saison De Lente character in it - next to none at all - and it might be all too reminiscent of the big and boozy anniversary beers they've released but, this beer is still damn tasty for an accident and it'll certainly get the job done.

Tastes more or less like the anniversary ale until the finish, where the accidental saison addition peeks its head through, giving it an off-putting medicinal flavor that I did not like.