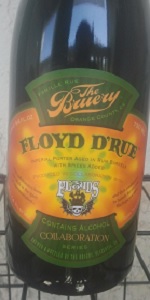 I've seem a lot of negative reviews of this and I get why people aren't into it. I absolutely love this. I wish I had another bottle for Christmas Day. Reminds me of my drunk aunts holiday eggnog. Nice and spicy and rummy and sweet. Smells of coconut rum and cinnamon. This would get me through awkward family photos and bad sweaters and terrible presents from people I hardly know. I certainly didn't expect a "balanced" beer out this. I expected an enormous bold juggernaut, and the Bruery and FFF delivered. Cheers.

4A: Pours dark and viscous.

4.2T: Oh my god. It tastes like...Christmas. Rum. Spicy and rich and dark (roasted) stong. Eucayltotus. Pine needles. Booze. Tar. The more ridiculuois the flavors get, the more I like it.

A - Poured into a Kate the Great tulip a deep dark black hue with a thin mocha halo.

T - Taste is lots of cinnamon and spices, orange liquor, chocolate, loads of rum which was to be expected. Rather boozy but come on, it's almost 15%! Rich rum cake, heavily spiced. Well executed.

O - Overall this beer was really good. Of course it's boozy...it's rum! Seriously, it's almost 15% and rum. What do your expect...should be higher rated.

M - Silky smooth with a perfect medium-full body for the style.

O - Outrageous. One of the best imperial porters I've had.

Pours no real head, little dark bubbles, super dark black with no light, it absorbs light, long legs that just coat the glass and never slide downwards, like a wall of legs .

Nose is WTF?! A weird blend of everything, a cooked cinnamon and baking spices, little spiced rum thing, lots of cinnamon and possibly allspice, with some vanilla, a straight molasses rum and rummy booze, weird candy orange peel cointreau like aroma, choc and cocoa.

Taste starts with more orange liquor and rum, lots of candied orange peel, cinnamon too, like a nice rum punch, fresh raw molasses and candy, a big booze flavor too, wamrth, tingle, etc, and some nice vanilla, orange vanilla icing, and just a touch of cocoa. It has a nice cake like flavor, rum cake with orange vanilla icing with cinnamon and baking spices. Actually quite nice, just really boozy. Finish is sticky and a bit syrupy sweet but not cloying, fair booze warmth too, more rum cake and orange vanilla icing, little spices, cinnamon, etc.

Overall much better than expected, yes it's really booze and pretty rummy, but that's what it was supposed to be, it started pretty much as Black Tuesday and they aged it in rum barrels, so that it is this drinkable is surprising, with a nice cinnamon, orange, vanilla, spices, etc. Really interesting.

s - Smell is of spices, rum, vanilla, roasted malts, dark chocolate, light smoke, and leather. Nose is interesting and a bit weird, smelling like a rum and coke a little bit.

t - Tastes of spices, rum, vanilla, sweet rum, more booze than the nose, roasted malts, dark chocolate, bakers chocolate, and toasted malts. Tastes a bit like Captain Morgans, which to me is not a very good thing.

o - Overall I saw this basically like a porter aged in Captain Morgan barrels which to me, is not great or very desirable. Lots of sweet rum and spices, just wasn't a big fan compared to the awesome RdF. Wouldn't recommend seeking this one out again.

Thanks to GRG1313 for giving me this one.

Pours an opque black with a foamy dark khaki head that settles to a partial film on top of the beer. Small dots of lace slowly drip into the remaining beer on the drink down. Smell is of dark roasted malt, cocoa, char, earth, spices, spiced rum, and dirty wood aromas. Taste is much the same with cocoa, spiced rum, and slight cookie dough flavors on the finish. There is a mild amount of roast and wood bitterness and an alcohol kick on the palate with each sip. This beer has a lower level of carbonation with a slightly crisp and medium bodied mouthfeel. Overall, this is a below average beer that smells sort of like a spiced cookie as it warms up, but the flavors are a mess of spices, spiced rum, and alcohol.